The Crafty Part of my Road Trip

When this road trip was first planned (see my previous post for details), one of the reasons was to show my friend how to use the crafty stuff she'd scored at a yard sale, and that she'd added to with more scores on Craig's List.

What did we have? A Big Shot, a bazillion Sizzix dies and Sizzlits, and some other stuff we didn't ever get to. Let me just say: this was a major SCORE.

I had brought along a few boxes of old class kits and some stuff for actual projects, in case the mood struck us. I showed her how to use the Big Shot and we made a card and a few other things until she felt comfortable with the process. She is VERY crafty, and has all sorts of ideas for things to make for the house.

This is what the table looked like after three women were finished "playing" and being crafty: 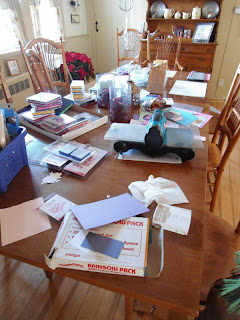 I'm showing you this so you can contrast it with how things looked after we added four 20-somethings the following night for Arts & Crafts Night: 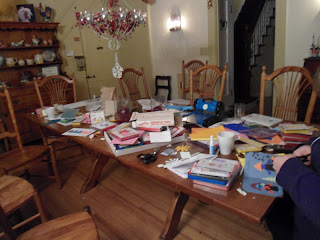 I had actually planned projects in case they were needed, but once they saw they could make paper dolls with clothes and hair and accessories, the night kindof set its own course. Plus, the quantities of wine consumed prior to the crafting might have had an impact on that decision.

But what a hoot! We had the best time!  Following are their completed projects. First, an example of the paper doll theme of the evening: 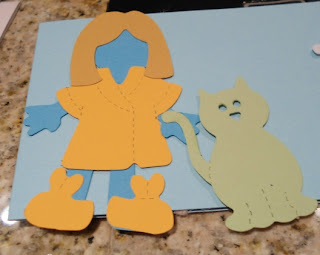 A blue person with bunneh slippers and a cat. Next we have someone who actually broke with the paper dolls mode and instead focused on frogs and punctuation: 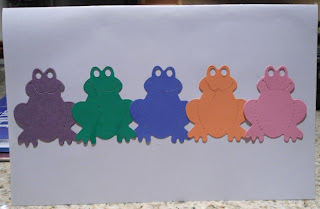 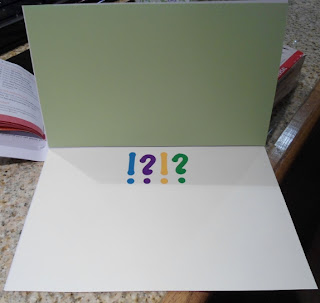 Then the young lady who made the Blue Girl With Bunneh Slippers made this fabby card: 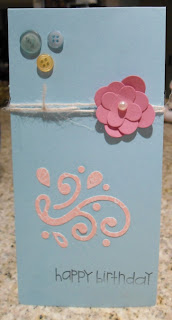 Then, back to the paper dolls. There were two unattended people in the corner who may or may not have (a) lost control, or (b) embraced the true meaning of getting your craft on. They made this: 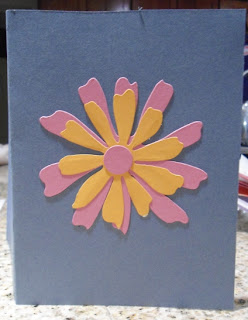 Looks tame enough, right? But the inside is the true masterpiece: 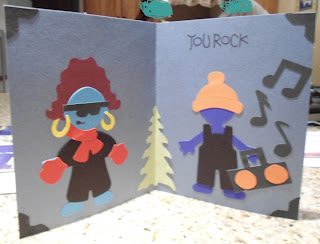 (The blue scribbles above the card are my attempt at the infamous Blue Dot of anonymity. Or, in my case, the inability to get the Blur feature to work, so it was all I had, people. I think I've invented the Blue Scribble of Anonymity.)

So there you have it: a fun time with crafts, and lots of happy people. I can't imagine a better way to spend a few days, can you? :)

Now that I'm back home, I have some serious catching up to do. I hope to tackle some challenges so I'll have some cards to show you later. Hey, it could happen.

Thanks for stopping by!
Posted by Leslie Hanna at 10:27 AM