Reports of my death have been greatly exaggerated. I just realized I haven't posted since Sunday, but that's largely because I've been a slug, plus I've been playing with the Silhouette Cameo and not accomplishing much else. AND, I have the last craft show of the season (for me, anyway) this weekend, and I've spent some time getting my ducks in a row for that.

I did make a card last week (LAST week, not this past week) with one of my earlier Silhouette Cameo cutting 'speriments. Here she is: 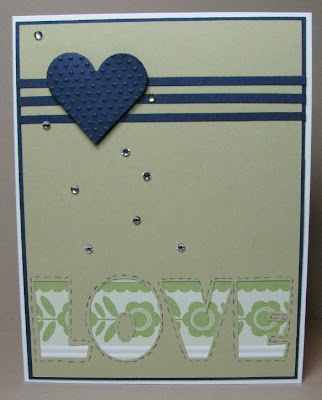 Except for the cutting part, this card is all SU. :) I used the color combination from this color challenge from Create with Connie & Mary: 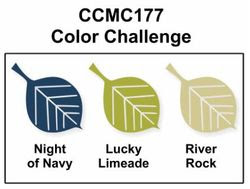 Do these not just scream my name? I punched two hearts out of Night of Navy and ran one of them through the Big Shot in the Scalloped Heart of Hearts Embosslit. I just wanted the dots - didn't care about the scallop part - and it fit perfectly in the center. The embossed one is raised up on Dimensionals over the non-embossed one. The card front needed more blue, and I just cut three strips of Night of Navy and stuck them onto the River Rock.

I had cut the letters out of the River Rock piece, and the Lucky Limeade patterned paper is behind it. The DSP is from ... um ... I don't remember. :( I added the bling to connect the top and bottom horizontal elements and be a sorta vertical element. (Isn't it scary that I sound like I know what I'm talking about?! Remember: I make stuff up.) At the last second I decided to faux stitch around the letters with a Night of Navy marker.

So I'm mostly set up for my show this weekend. It's a 2-day, so I did the bulk of the hauling tonight to avoid the bumper cars and unloading masses in the morning. I'll show you a pic of my booth tomorrow when I'm done setting up. The jury comes around at 9 am to judge the booth set-ups, and the show starts at 10. My goal is to sell out and bring home as little as possible. Wish me luck!

Local peeps: Bauer Drive Community Center on ... Bauer Drive, in Rockville. Stop by if you can! I'll be there Saturday and Sunday! :)

Thanks for stopping by!
Posted by Leslie Hanna at 7:52 PM