Hambo Challenge and CAS (not)

I tried the Hambo Hoedown challenge again, this time remembering it involved CORNERS. I still failed, unless consistently-rounded corners counts as "dressing up", which I'm pretty sure it does not.

I also used a sketch that has been stuck in my head since I first saw it, and tried to make it work. 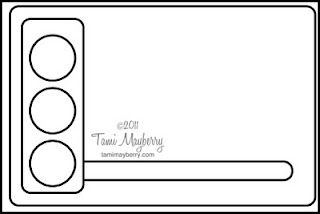 When I first saw it, I thought "stop light!" Then my challenge was how to incorporate that into a card. THEN I thought I needed to use a Hambo image. Then this happened: 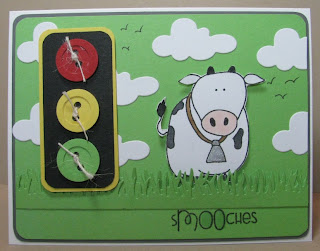 I totally blew the CAS aspect of the challenge, but it NEEDED CLOUDS! I originally had just the stop light, cow and grass and it was booooooring. I was going to use my LawnFawn Harold's Letters set to stamp "cow crossing" but then I decided the sMOOches sentiment from Paper Smooches was better.

And the Hambo challenge was to dress up the corners. I don't think a corner rounder really counts there, but I'm going to enter it anyway, if only to let them know I'm not dead.

That's it! I'm off to find something for dinner, then I'll hopefully stamp some more.

Thanks for stopping by!
Posted by Leslie Hanna at 6:28 PM