I ordered some glitter pens for my Silhouette Cameo, and they arrived today, so I had to play! I HAD to!

I just made this: 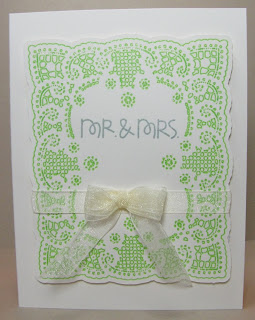 The lace is an image I bought at the Silhouette online store, and I used my green glitter pen to draw it with the Silhouette Cameo! May I just say SQUEEEEE! Naturally, I selected one of the most intricate images available to use as my 'speriment. A simple bird cage would never do!

So what is so amazing about this effort? Well, besides the fact that it SPARKLES?!?! I searched high and low all over the Interwebz and could not find instructions on how to sketch & cut with the Silhouette Cameo. Nope. There are instructions and videos on how to use the sketch pen, and how to Print & Cut, but not sketch & cut. Hmph.

So I 'sperimented! I had the image in my software, loaded the card stock and cutting mat, loaded the green pen in place of the cutting blade, and sent the design to the Cameo. GOR-JUS!  Next, DO NOT REMOVE THE CUTTING MAT! Nope. I switched out the pen and replaced the cutting blade. Then in the software I drew an outline around the image and offset it a little to leave a border, deleted the image so all I had was the outline, and sent THAT to the Silhouette. Since I hadn't removed the cutting mat, I hoped it would cut perfectly. And you know what? IT DID! IT DID! WHOOT! I did a happy dance!!!!

Okay, then I had to calm down and make this into a card. I added some loooong-retired SU organza ribbon and tied a three-loop bow with my Bow-Easy. Then I stamped the Mr & Mrs (from Paper Smooches) in Memento London Fog.

I don't know about you, but I think this has potential. :) (squee)