Today I decided to step into The Captain's Quarters to see how Bobra accepted my crafting time (read: not showering him with constant attention), and he was fine. He explored, hung out, then went on his way. Yay!

Last night I did wake him up a bit, though, when I fired up the printer. Hee hee, poor thing. First he tried to climb inside the opening where the paper comes out, and when that didn't work, he walked around the printer to check out the back of it. Then he went back to sleep. Ah, the life of a cat.

I had printed off this week's Retro Sketch: 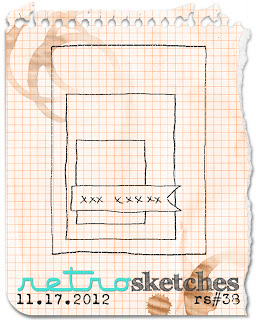 because I had an idea that I may or my not have pulled off, but I'm going with it anyway.  You see, one of the things we learned in the last Online Card Classes series: Holiday Card Workshop was something Jennifer McGuire showed us with die-cuts. Inspired by this idea, well, first my card: See that heart? I had planned to call it the third rectangle in the sketch, and I made it red. I die-cut a heart out of the green dotted paper and nestled a red one in it's place. But it turned out to be too dark -- too much of a contrast and I didn't like it, so I decided to just cover most of it up with the green piece I'd removed, offsetting it a little to expose just a touch of red. The green heart is actually stuck to the back of the sentiment banner, so it's raised up a bit. Not exactly what I was going for, but I think I like it anyway.

And yes, I should have rounded the corners of the green rectangle, but I had stuck it down already and it was too late. Pffth.

So there you have it, once again: a non-Christmas card made from Christmas paper (MME All Is Bright), and a technique learned in a Holiday Card Workshop used on a non-holiday card. I love when that happens!

Products use but not linked below: SU Naturals White card stock (base).