One of my self-assigned tasks this weekend was to disappear a pack of 6x6 paper, preferably of the (gah) pink variety. I am proud to announce I did just that! It wasn't a full pack, but it is now history, and I have ... doing the math in my head ... 31 more cards for OWH. Whoot!

I plan to bore you to tears, so you may want to grab something alcoholic (if it's evening where you are) or a big cuppa joe if it's daytime, and settle in for a long ride. Let us begin.

Yesterday (Friday) Sandy, our fearless leader extraordinaire over at OWH had a trial live chat via StageIt.com. My DSL was freezing most of the time, so I caught about 6 words ... freeze ... jump ahead a topic ... missed that ... cool card ... whoa, when did we change topics again? Yeah, like that, for 45 minutes. But along the way she showed us some cool cards, which of course I only partially remember, but one of them pushed me into the effort whose results you are about to see.

Here's one of the cards I made with the sketch (as I remember it): 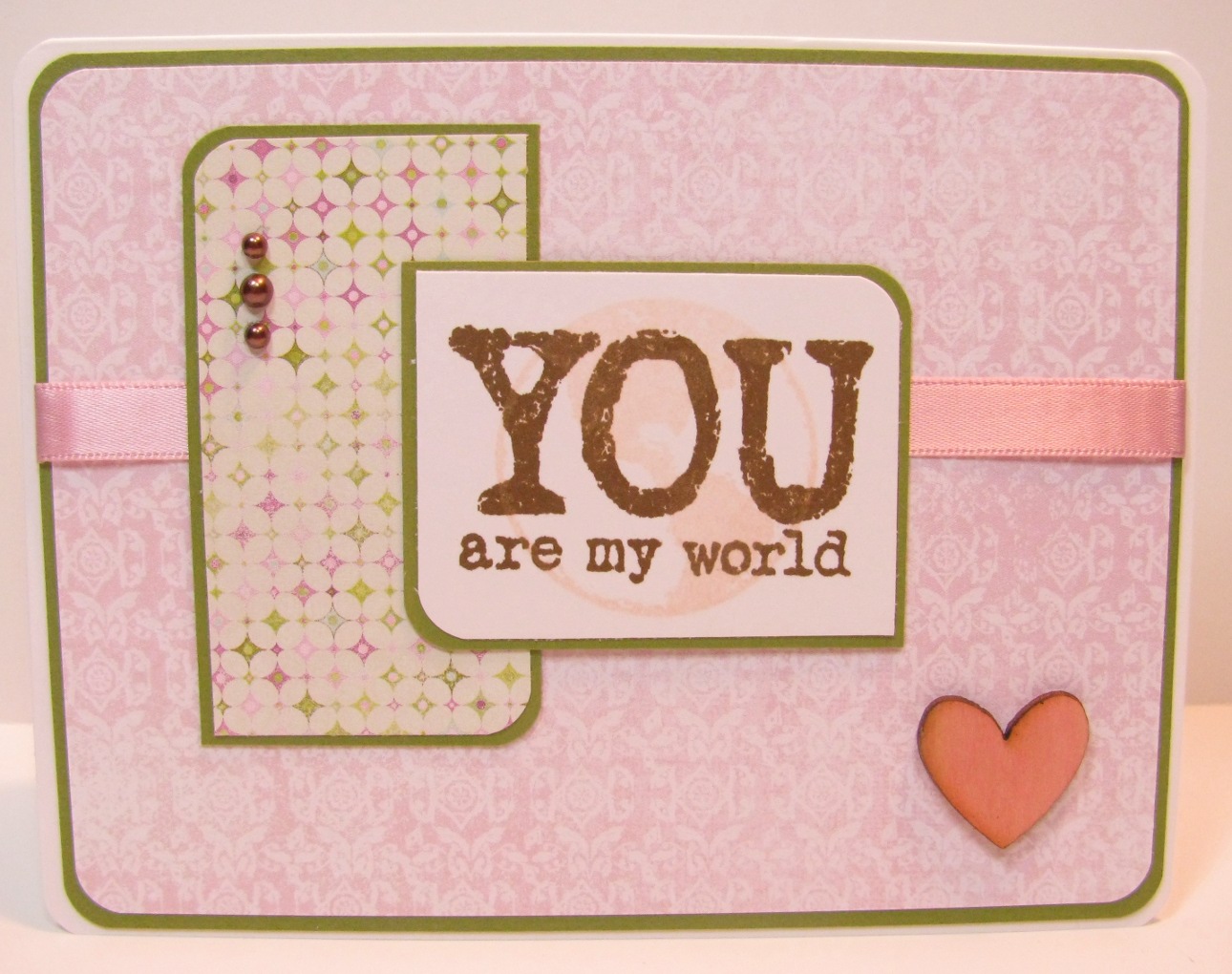 Also, I beg you to forgive the worse-than-normal lighting here. One of the bulbs in my Dining Room overhead light burned out and I can't find the replacement bulbs (This, people, is why I can't put things away -- I never see them again. Ever. Or until I move) ... so I thought the funky lighting was due to being short one bulb (the lamp, not me, although ... ) so I turned on another clip-on lamp I have that has a bright white bulb in it. When the bright white light mixes with the Reveal light, you get what you see here. It's not pretty.

ANYway, I found I had 14 full sheets of 6x6 paper left in my pack of Memory Box gossamer papers, so I made 14 cards, 11 of this design. I took each base and figured out which piece of smaller remnant was least offensive and cut those vertical pieces. Then I stamped 11 of the worlds (in SU Blush Blossom) on SU Very Vanilla and stamped the sentiment over them in Distress Gathered Twigs. Why brown? Because except for this card and one other, the remaining cards are matted on dark brown. This one got Old Olive.

Oh, one more thing. I started these and then got stuck, for hours and hours. Something was missing, but I just couldn't figure out what it was. Then I remembered the old days when I could not make a card without RIBBON! So out came my Box Of Every Color Pink But The One I Need ribbons, and I honestly almost gave up until I found the ribbon you see above. I still didn't use it up, though. Sigh. 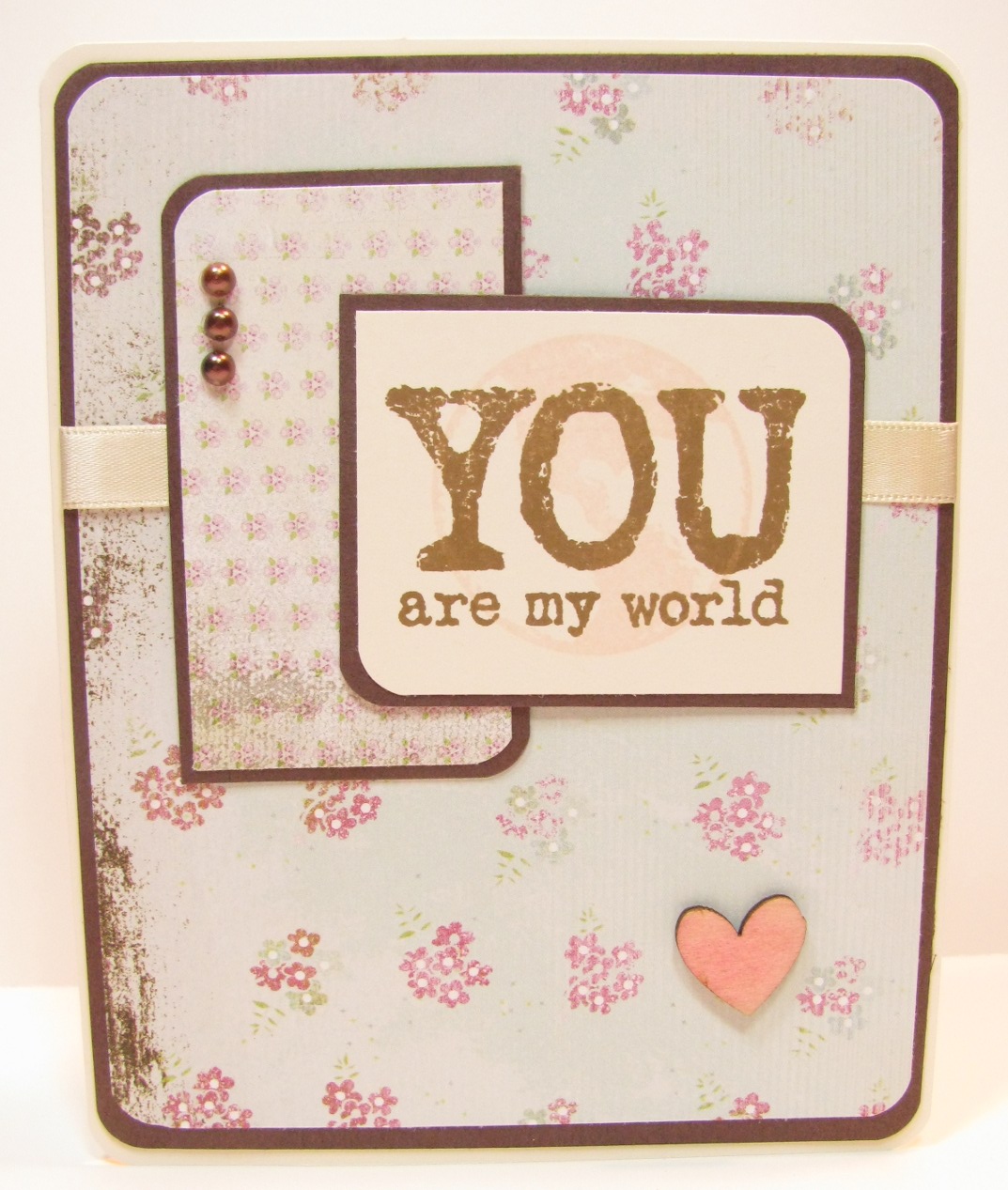 After a few horizontal cards I decided to make some Vertical. Oh, look, the parts are stuck on crooked. Sigh.  Here you can see the brown layers, and this one got cream ribbon. The heart here is from KaiserCraft, but I also used some of my Studio Calico Veneer hearts on some of the cards. I think I like the KaiserCraft ones better. They are smoother. Neither one took the Copic ink particularly well; I had one heck of a time getting the right pink, and I finally gave up and just picked one. 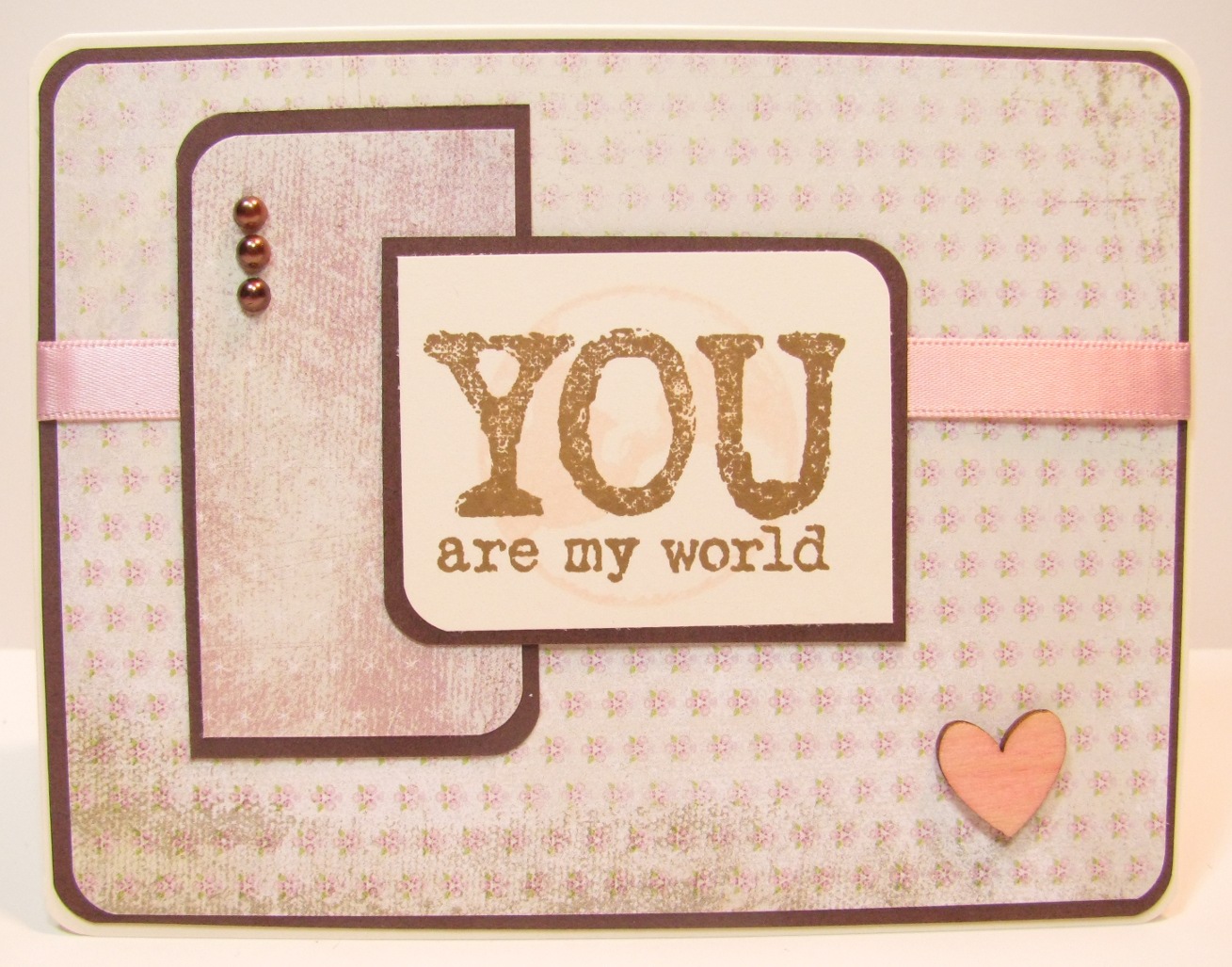 I forgot I liked the vertical version and went back to landscape. ;/ 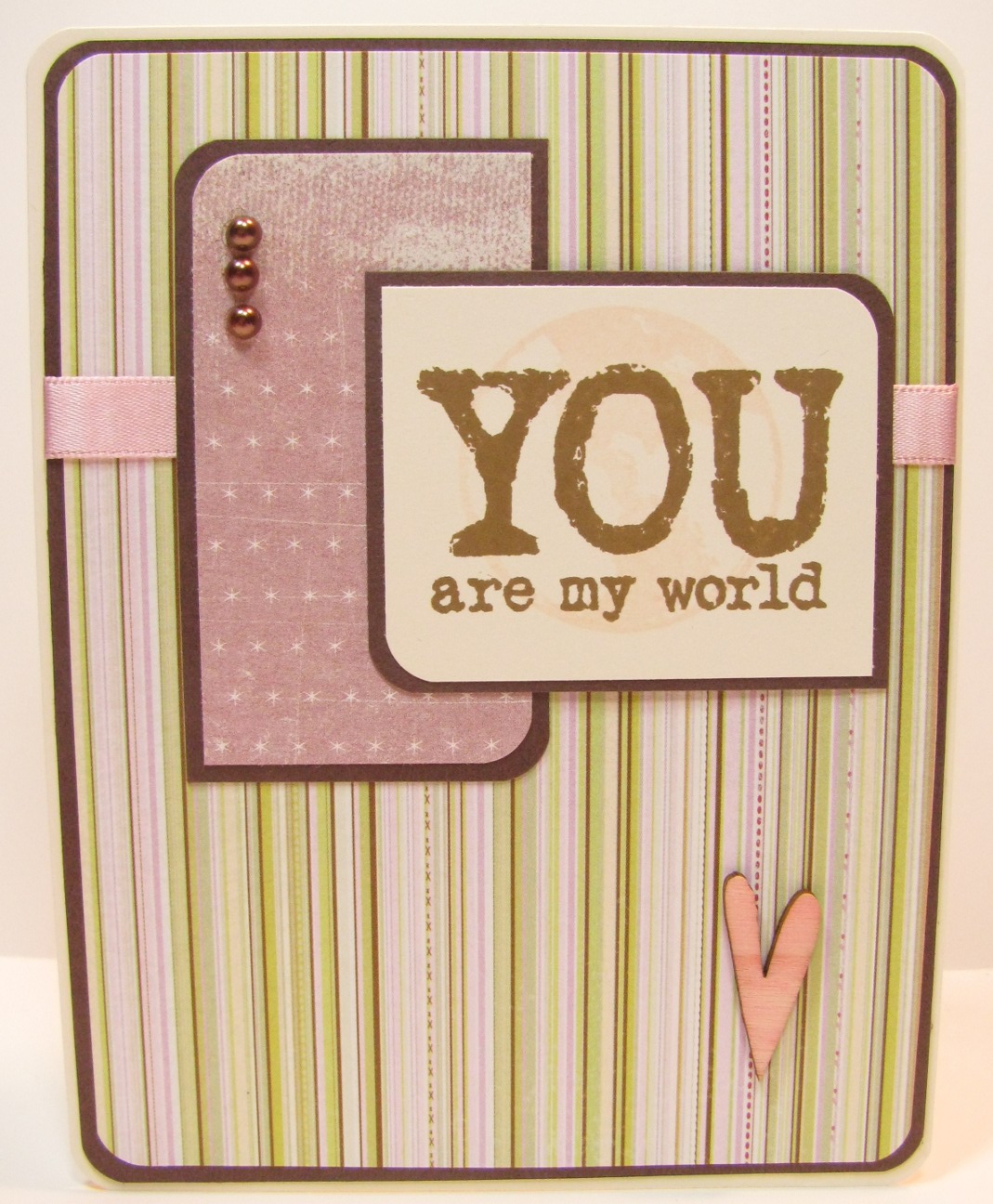 Stripes! But I pinked it up to ensure it can't be given to a guy unless he's very comfortable in his skin.  This one has a Studio Calico veneer heart, 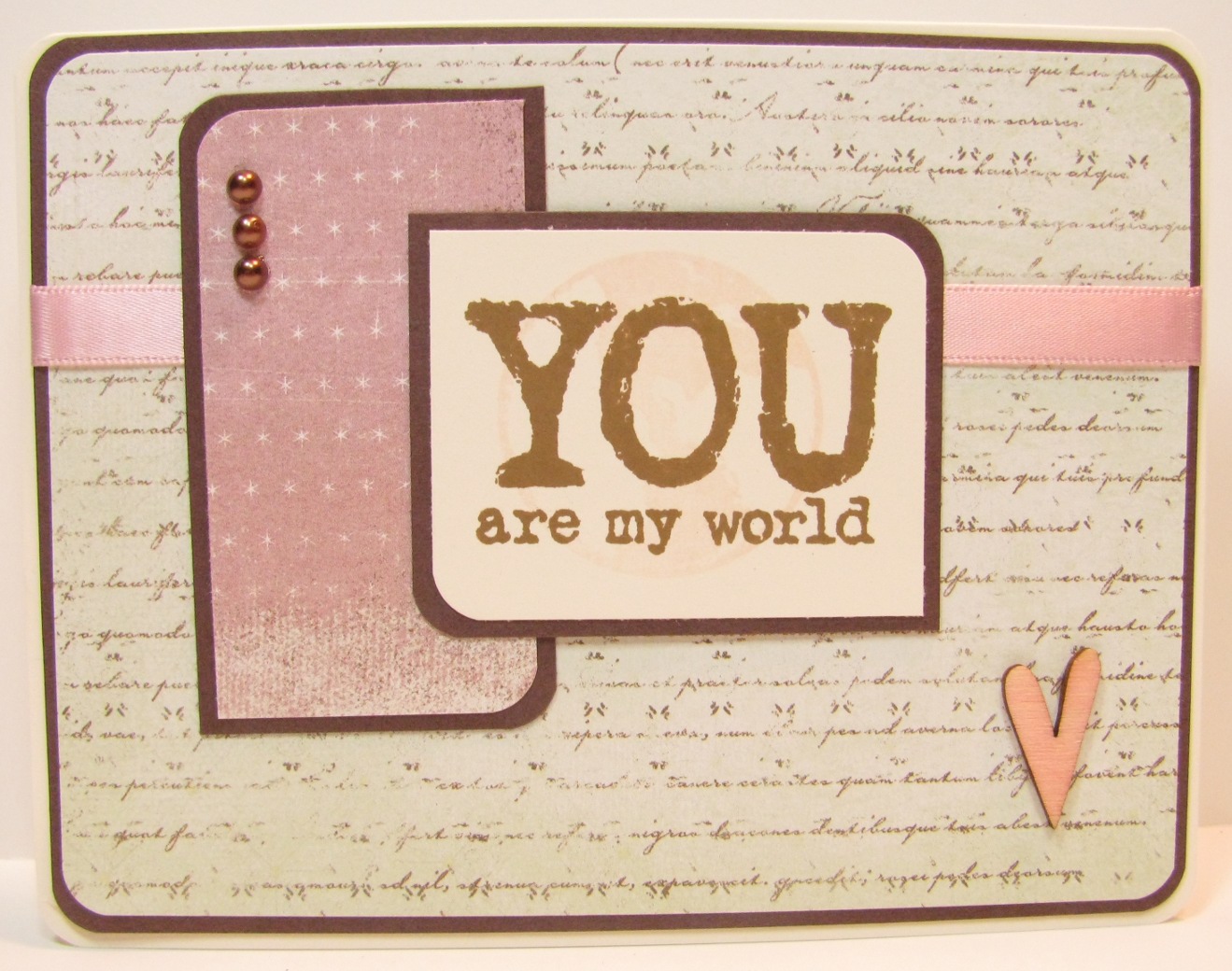 Another horizontal (I can't be trusted). You'll notice the clash of pinks here. Every color I tried on the hearts came out orange. I've embraced it.

Last one from this batch: 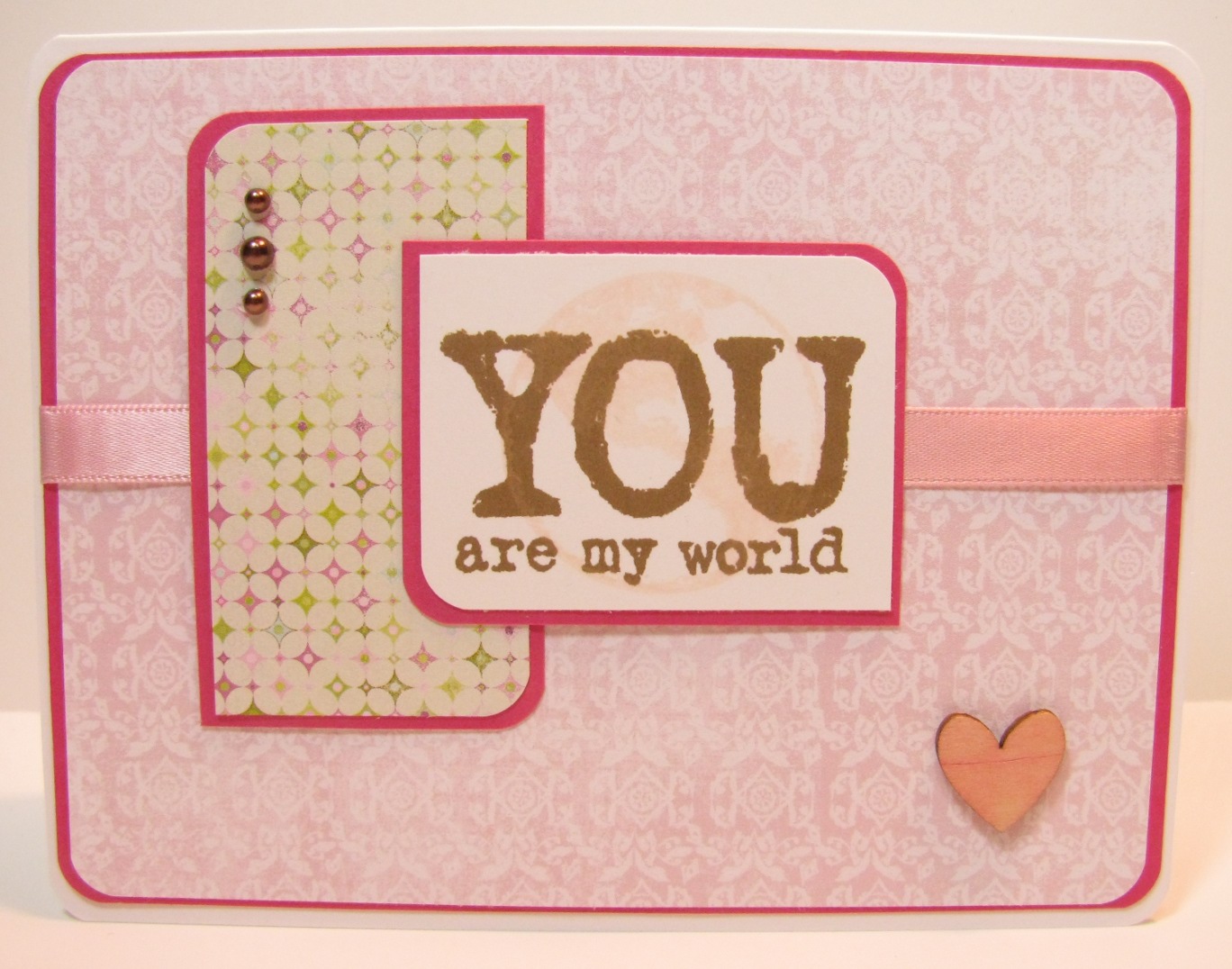 This one I mounted on Melon Mambo, just to get one more clash-y pink into the game, and it got a sentiment on white because vanilla just wasn't happenin' here. You can also see I was running out of those aged copper pearls, and this one got a medium plus two small ones. Wow, five pinks on one card. That's pretty awesome, especially for me.

Okay, then all I had left were cut-offs from the larger pieces, and I wanted to use them all so there was nothing left. I cut the larger strips into smaller pieces and ended up with a huge pile of paper strips I then cut into banners. I then proceeded to stick 3 or 4 to a card base, and I kept cutting more bases until all the banners were gone. I had 17 cards. Whoa.

I made them all the same, except for the banners. Here's one of them: 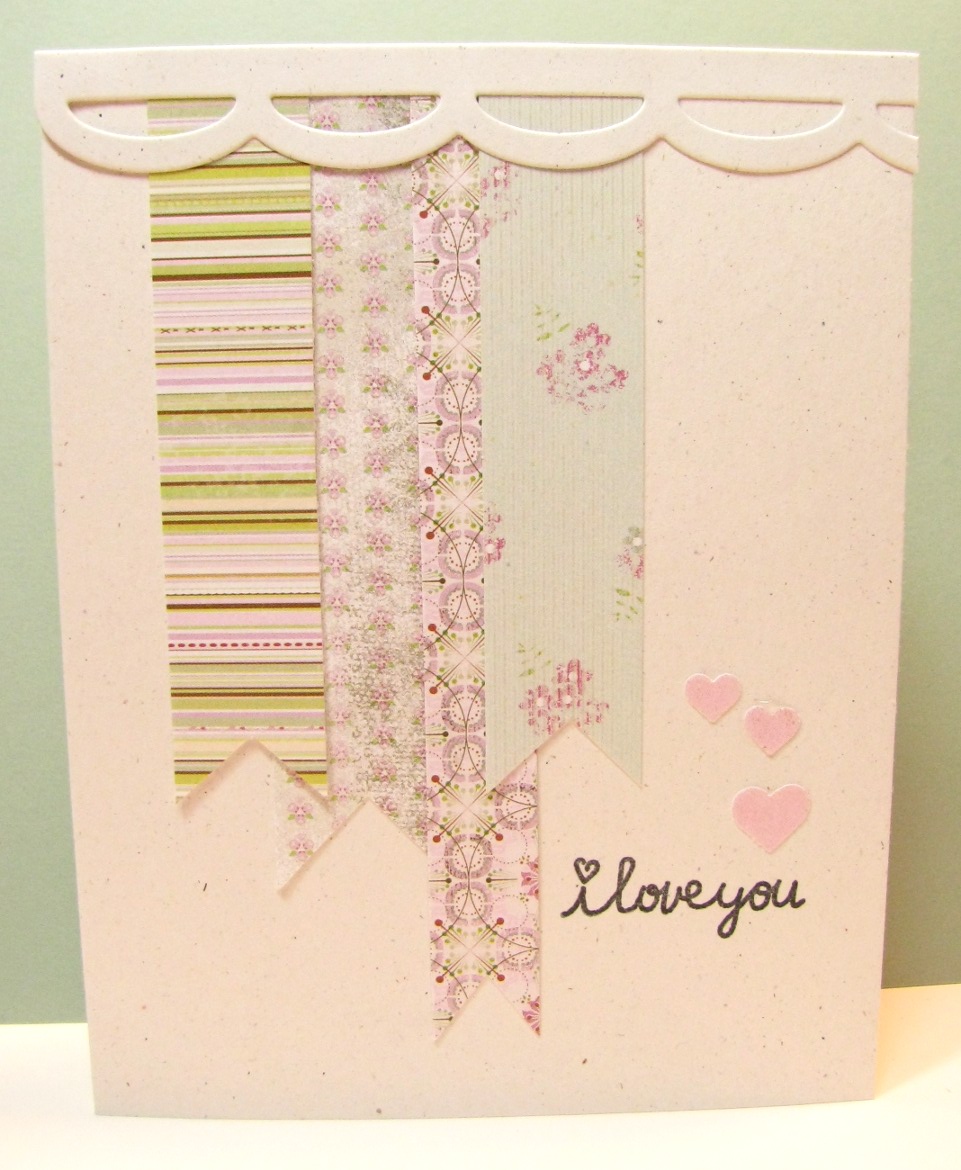 This one has 4 overlapping banners. Actually, I think this one originally had 3, but I was left with one lone banner so I stuck it on here. I also think I should have centered that die-cut piece. Oh, well. Next time. 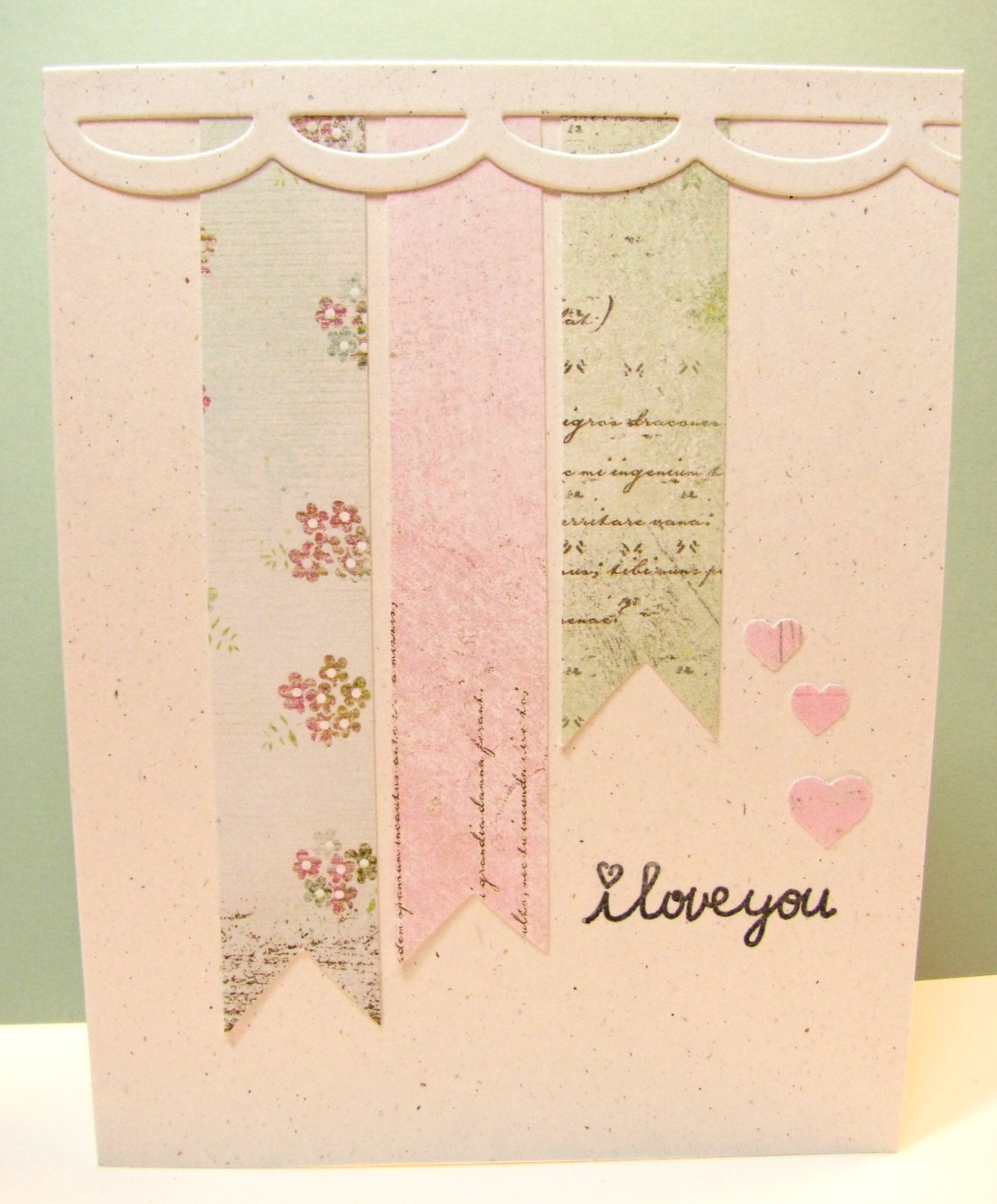 Three straight across. I think the Naturals White bases may have been a boring choice, but .. 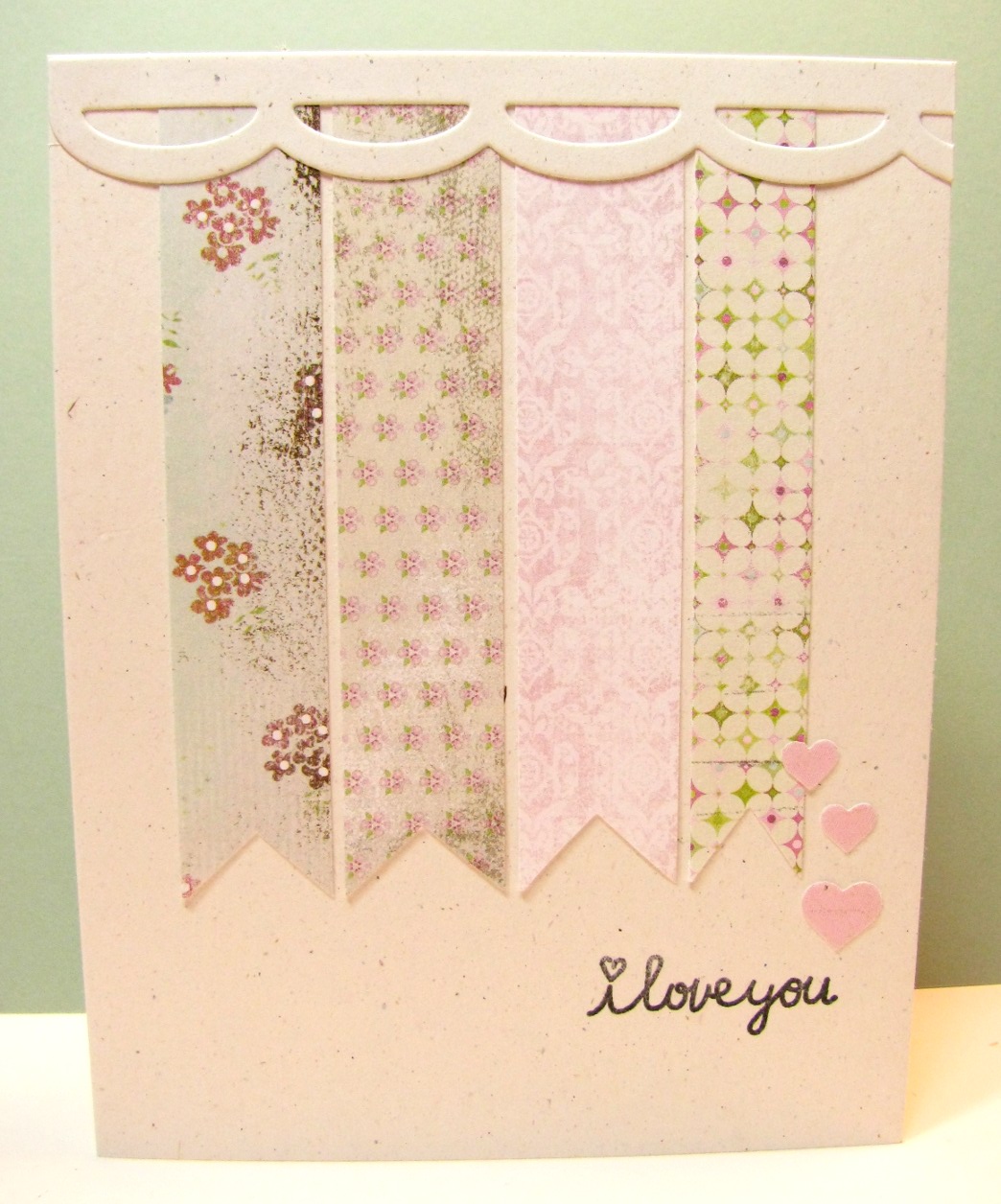 This one has four straight across.

And the last one of this batch: 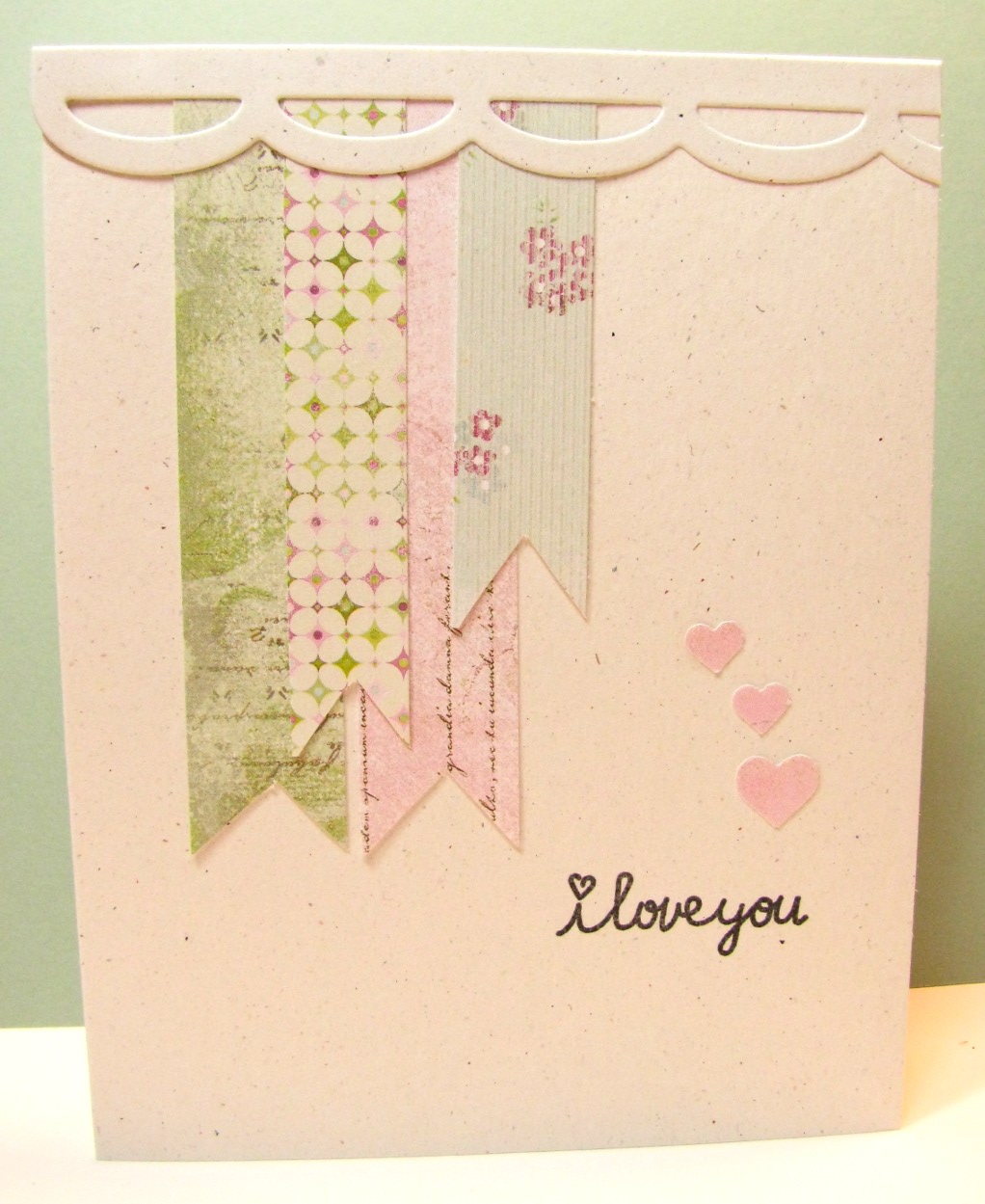 See those pink hearts above the sentiment? Remember I said I was all out of paper from this pack? I had to pull a pink sheet from my Basic Grey sugared pack to punch the hearts. And I didn't even use a full sheet of the stuff. Disappearing paper is turning out to be tougher than I'd anticipated.

Also in the paper pack were three sheets that I couldn't bear to cut up, so they became square cards: 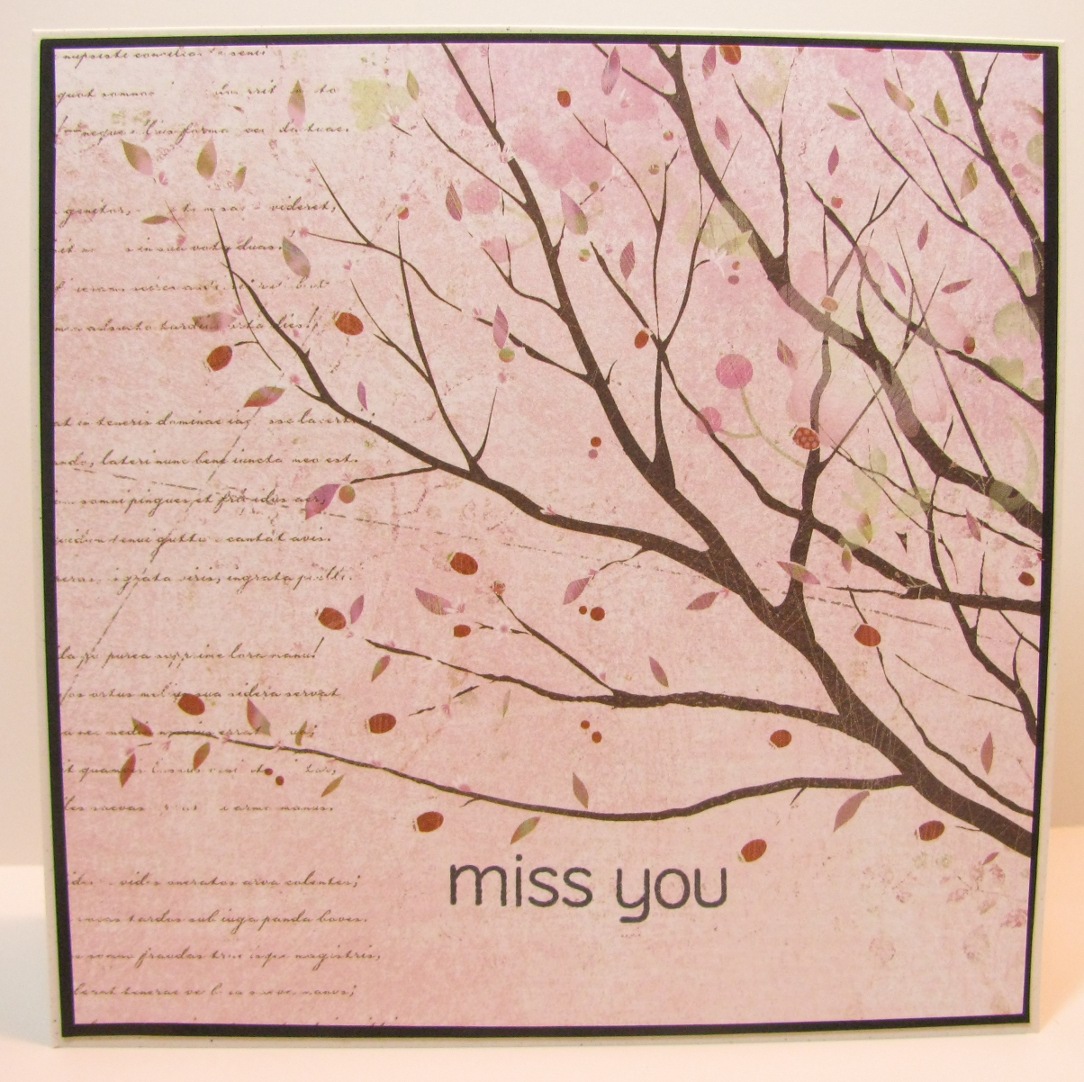 See what I mean? Where would you cut that down? I just stamped the Miss You and called them done.

So 11 of the funky sketch + 17 of the banners + 3 of the square version = 31 cards. There's still one day left of this weekend, so I may crank out some more, but I am so proud that this MB gossamer paper pack is gone, gone, gone!