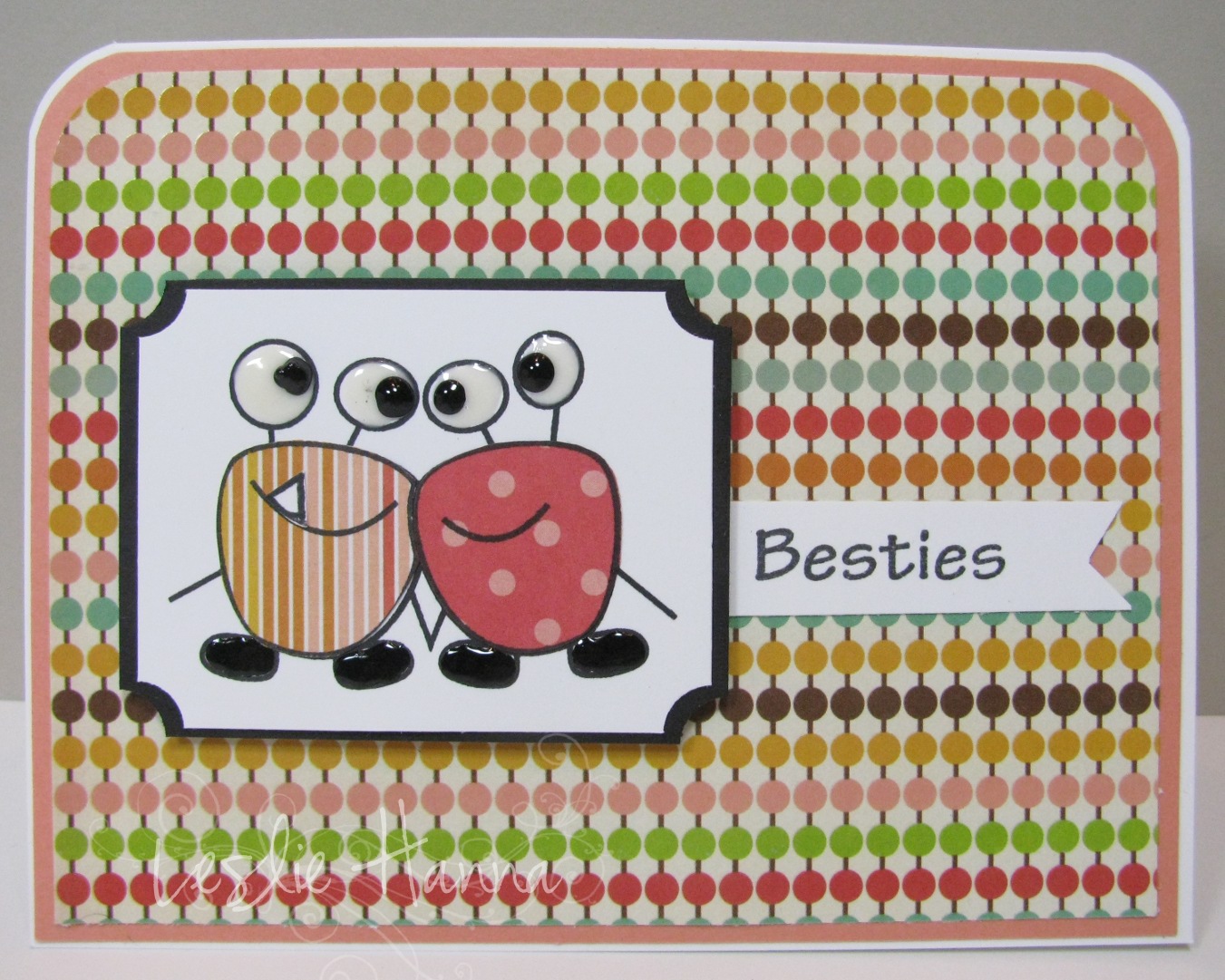 First off, I blame Natalie for influencing me to get this stamp set from Taylored Expressions. I have enough monstah stamps, but these guys are kinda cute.

The card came together fairly quickly. That piece of dotted paper from the Kaiser Craft Save the Date 6.5x6.5 pack (grrr at the extra .5 inch) is actually quite shiny; all the dots are embossed. If I'd been thinking clearly I would have used dark brown instead of black for the layers, but oh, well.

I was thinking clearly when I decided to assemble the whole card before I started with the Enamel Accents. I knew I wanted to do their eyes, and also decided to do their feet (I'm fairly certain monstahs don't wear shoes). I paper pieced the bodies and everything, then started carefully applying the glossy stuff. It went splendidly and I was soooo happy. I did the feet and the whites of the eyes, then let it all dry thoroughly. Then I went back to apply the black dots to the eyes -- that's black Enamel Accents on top of white Enamel Accents. You can see where I'm going with this, right? I nailed the eye dots. Perfect.

Then ... THEY RAN! They became black rivulets and made a mockery of my project. The Enamel Accents and I were no longer friends. I had to walk away. When I returned, I attempted to peel off the layers of Enamel and save the eyes, but I failed.

You may notice I've listed dental floss in my product list below. Yep: every stamper's best friend. I used it to carefully separate the destroyed white layer from the black layer and started over. I stamped and trimmed and corner-punched, but that's it. I did the feet and the whites of the eyes, then let it dry. When I ventured back in, I tested the black on a scrap, then did the eyes ... very slowly .. one at a time ... and DRAT, I globbed it onto the left eyeballs so he looks bug-eyed, but the right eyeballs looked okay.

Look deeply into the whites of their eyes:

To the untrained eye, they look fine, but *I* can see the globules on the left character. He (or maybe it's she) is looking adoringly into her friend's eyes, so maybe all is not lost. Also please appreciate that I had to stamp that image three other times: one time on each of two papers to paper piece the bods, then again to cut out the white toof. I tried several other methods of whitening, but they all failed me. Paper piecing was easiest, trust me.

Now if you'll excuse me I think I'll go list this in my store for like $10. GAH!

I think it turned out pretty cute after all. I only hope I've burned a few angst calories in the process. Hey, a girl can dream.