I Did It Myyyyyy Waaaaaaaay

Do you have that song stuck in your head now like I do? No? Well try this:

Today's saga (and it's a real saga) began when I spied a sneak peek of the card that Jennifer McGuire showed us in her post entitled No-Mess Glitter Die Cuts. After I ran out and purchased half of the latest MFT release, I was grateful I had the supplies to try the cards myself. Let me just say I did break up with glitter the other night, as it wasn't a no-mess experience in my world.

But I tried. I really did. Let us begin by looking at one of my cards: 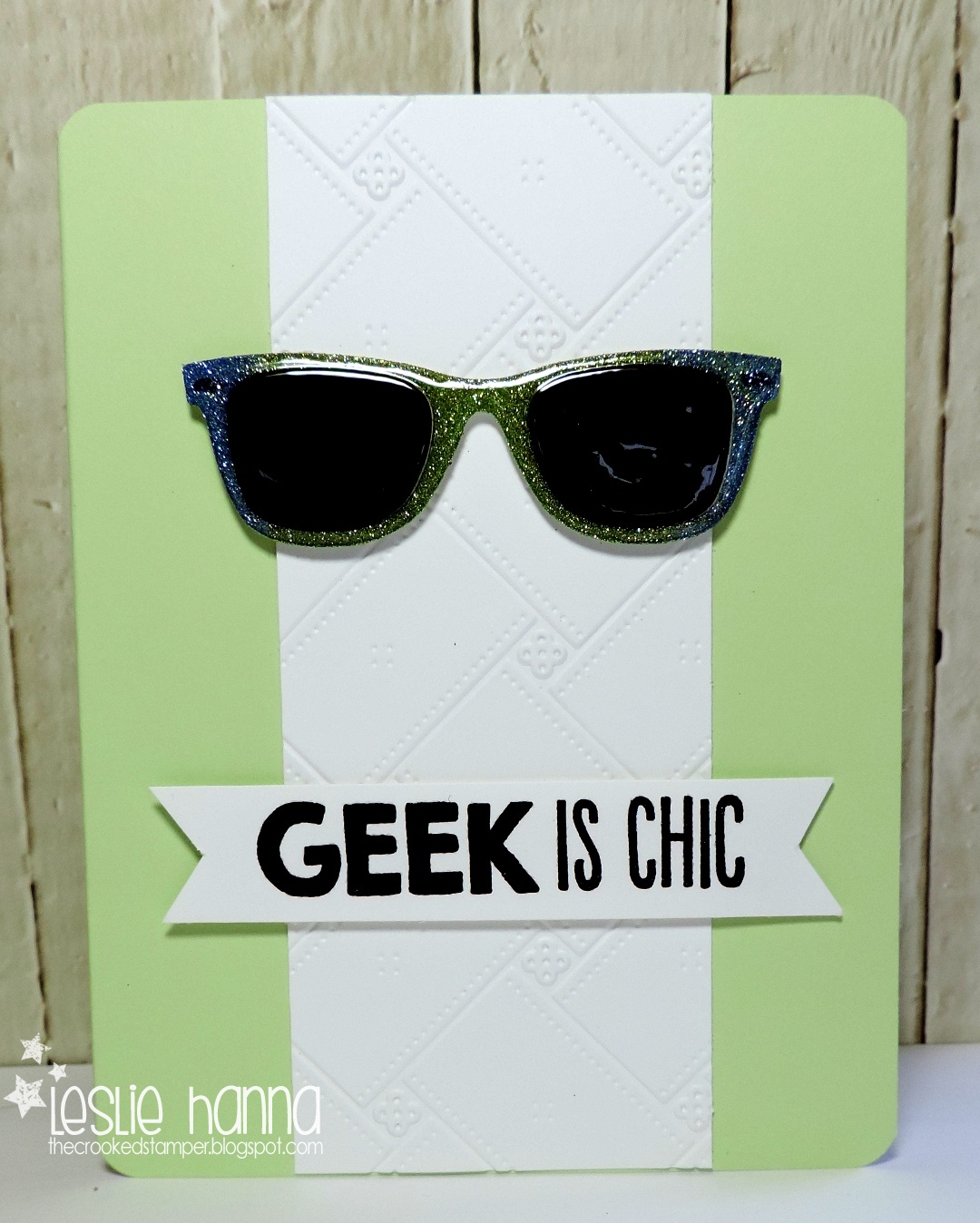 You may notice mine are sunglasses. We'll get to that in a minute.  I die-cut the glasses from double-sided sticky paper as directed and applied the glitter. I think if I'd only been making one of these, I might not have been so flustered, but I made several because I know me pretty well, and I mess up a lot, so I always cut more than I need so I can recover quickly when (not if, when) I mess up. So all along I was doing 4+ of these, just waiting for the screw-up.

So, glitter applied, I went to punch out the centers and found they were stuck in pretty well. Instead of putting them back into the dies to cut them again as Jennifer did, I took some centers I'd cut out previously from black card stock and stuck them to the adhesive. Then, when I got to the Glossy Accent step, I covered the whole thing, not just the rims. 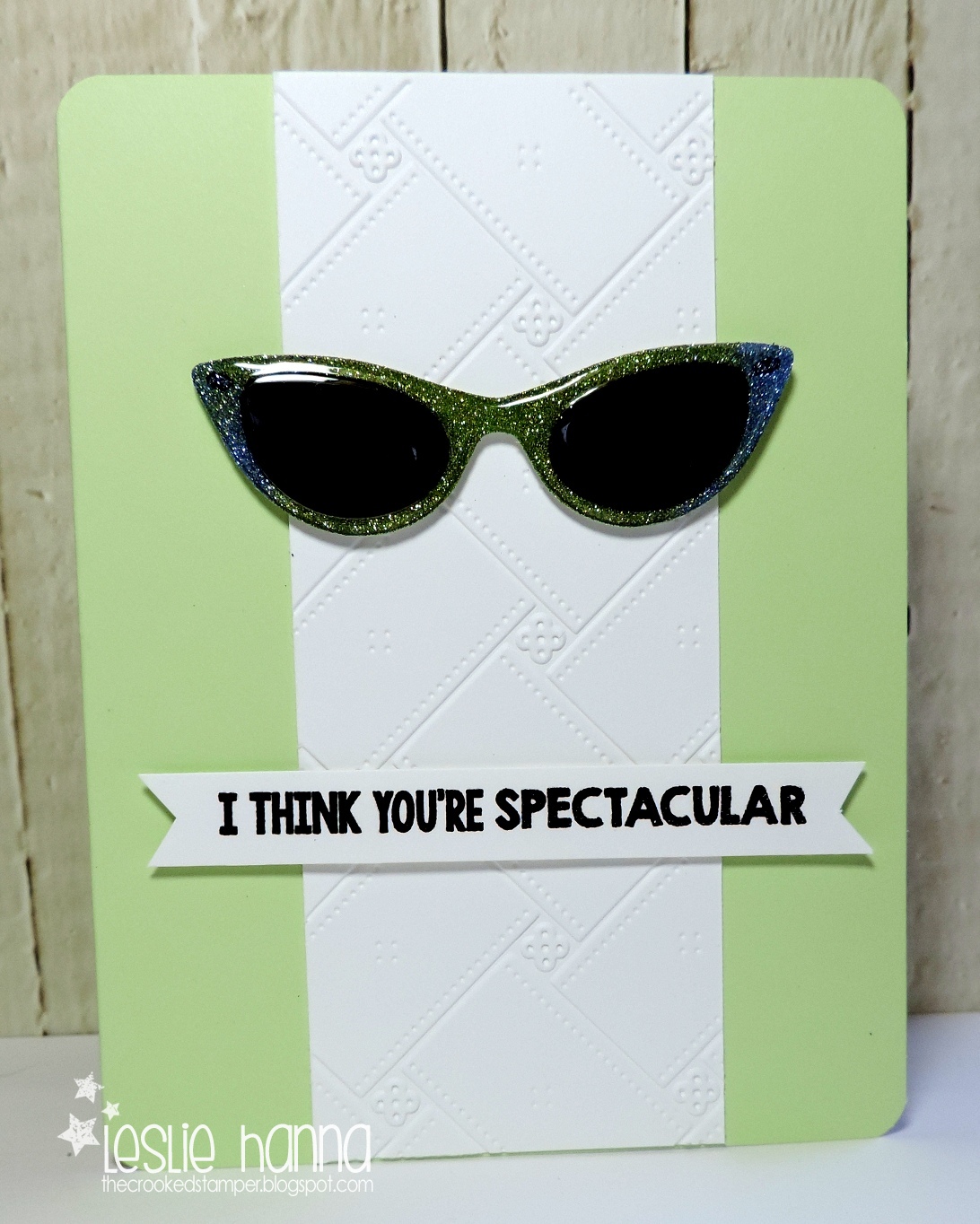 I also made a few with different glitter colors, just to further complicate my life: 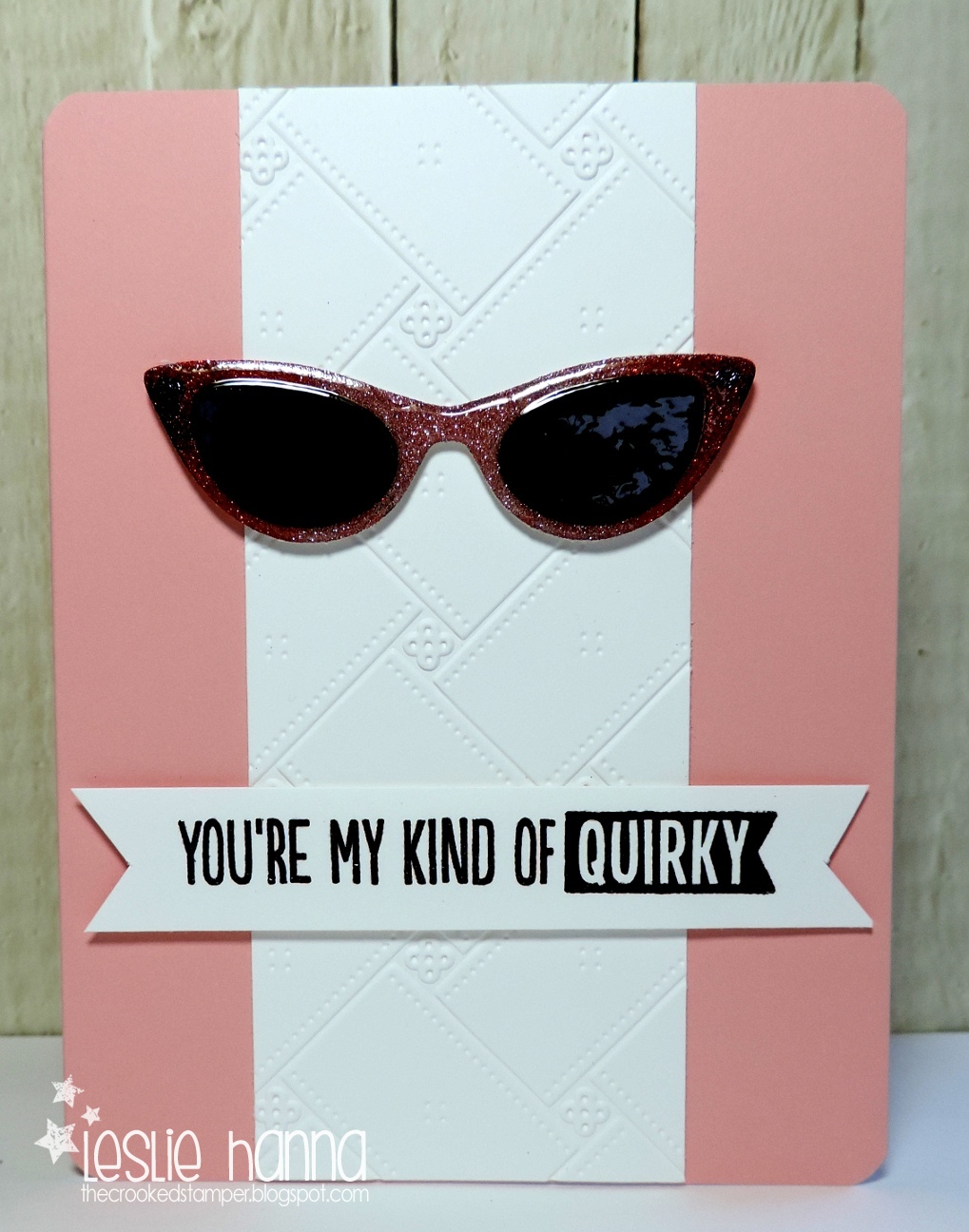 This started with pink in the center, followed by an orange-red, and finally a brown at the edges. And yes, it's (gah) pink, but that's one less pink card in my craft room. 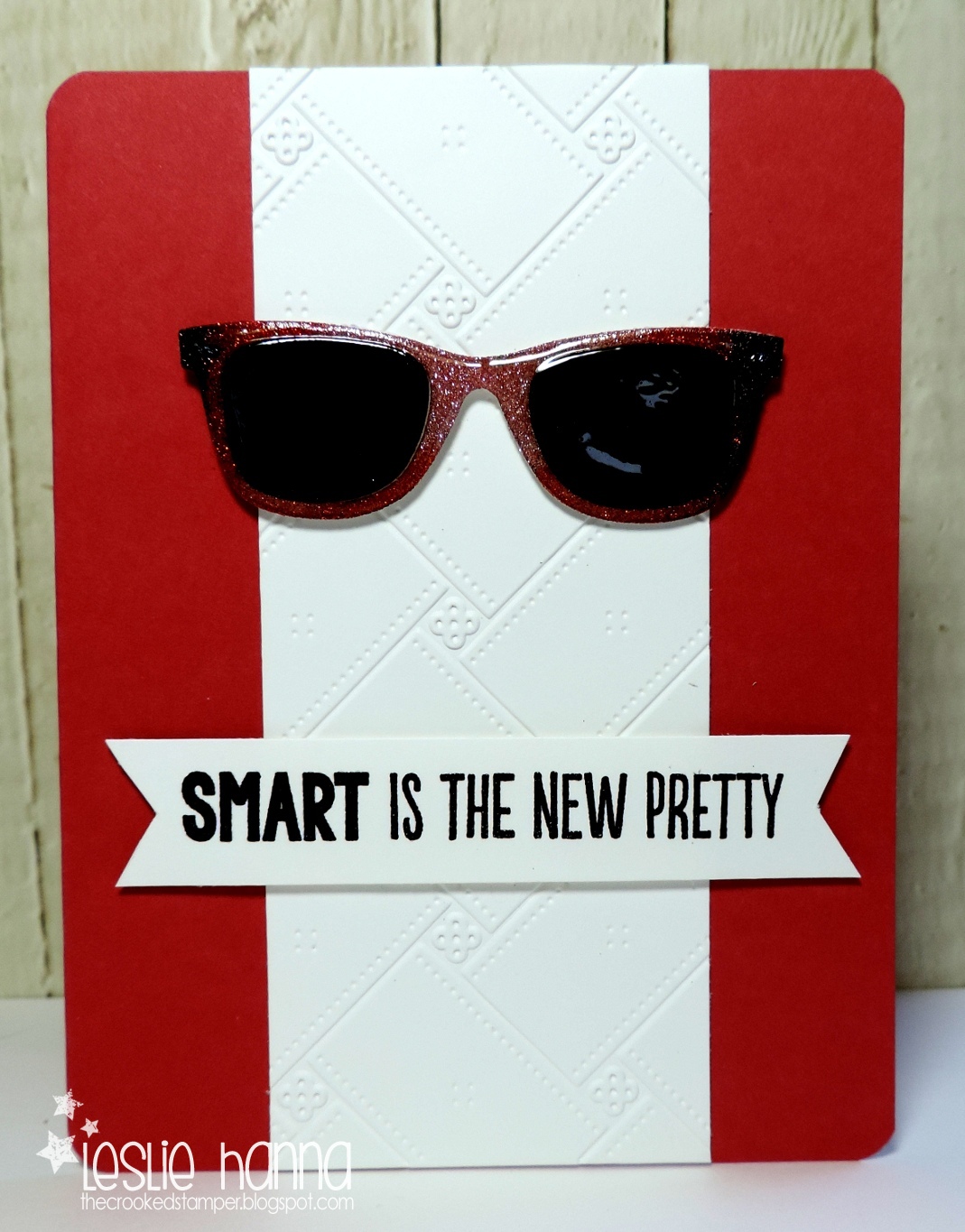 Also, instead of embossing the background, I opted to dry emboss the white panel, which totally justified the purchase of that embossing folder I was enabled to need when I was blurfing.

Oh, here's a close-up of the sunglasses:

Then, because I'm such a glutton for punishment, I went back in for more.  I decided glitter wasn't for me, and I came up with another way to achieve the same look with less mess.  I colored a piece of card stock with three colors of Distress inks:

then die-cut the glasses from that. I got color with no mess, and all I had to do was go over the die-cuts with my Wink of Stella clear pen to get the shimmer. So smart. *pats self on back*

Then my world fell apart. After I cut eleventy bazillion of the glasses and fussy-cut out the acetate layers as instructed, and layered on the pretty top layer, and assembled my cards, I started to apply Glossy Accents to the glasses. FAIL. FAIL. FAIL. It went all over the acetate and I could not control it. What a mess. I even tried to apply it with a tooth pick, but it was only marginally better.

I pulled off the glasses from the card fronts and went to re-watch the video. Then I got a clue and, starting over, I again cut the glasses from a piece of distress-colored card stock, but this time I got smart(er). I opted to do the clear embossing instead of the Glossy Accents. Here's one: 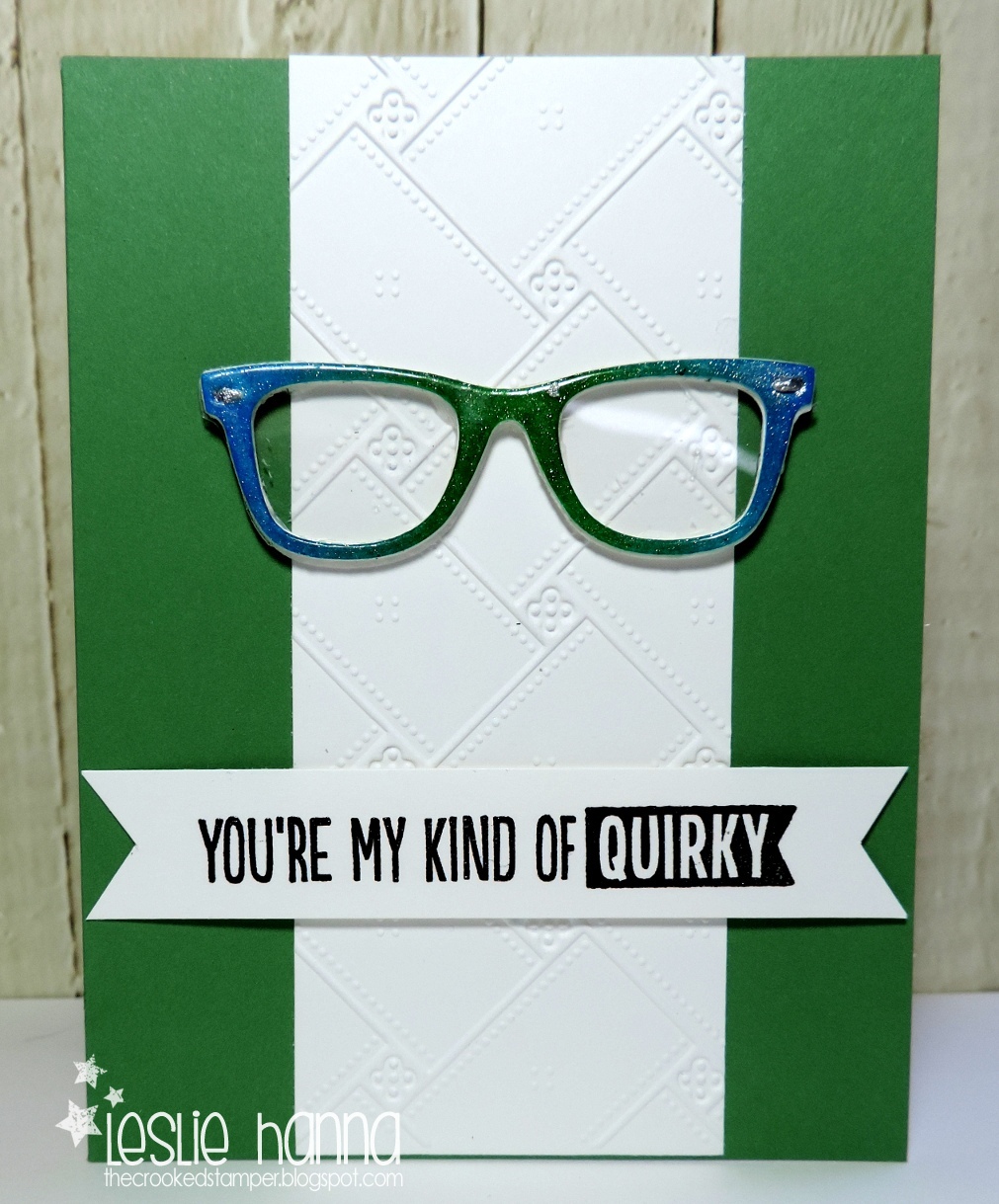 Maybe it's not as dramatic as the Glossy Accents, but it was waaaay less messy.

Here's another one with a different sentiment from the MFT stamp set: 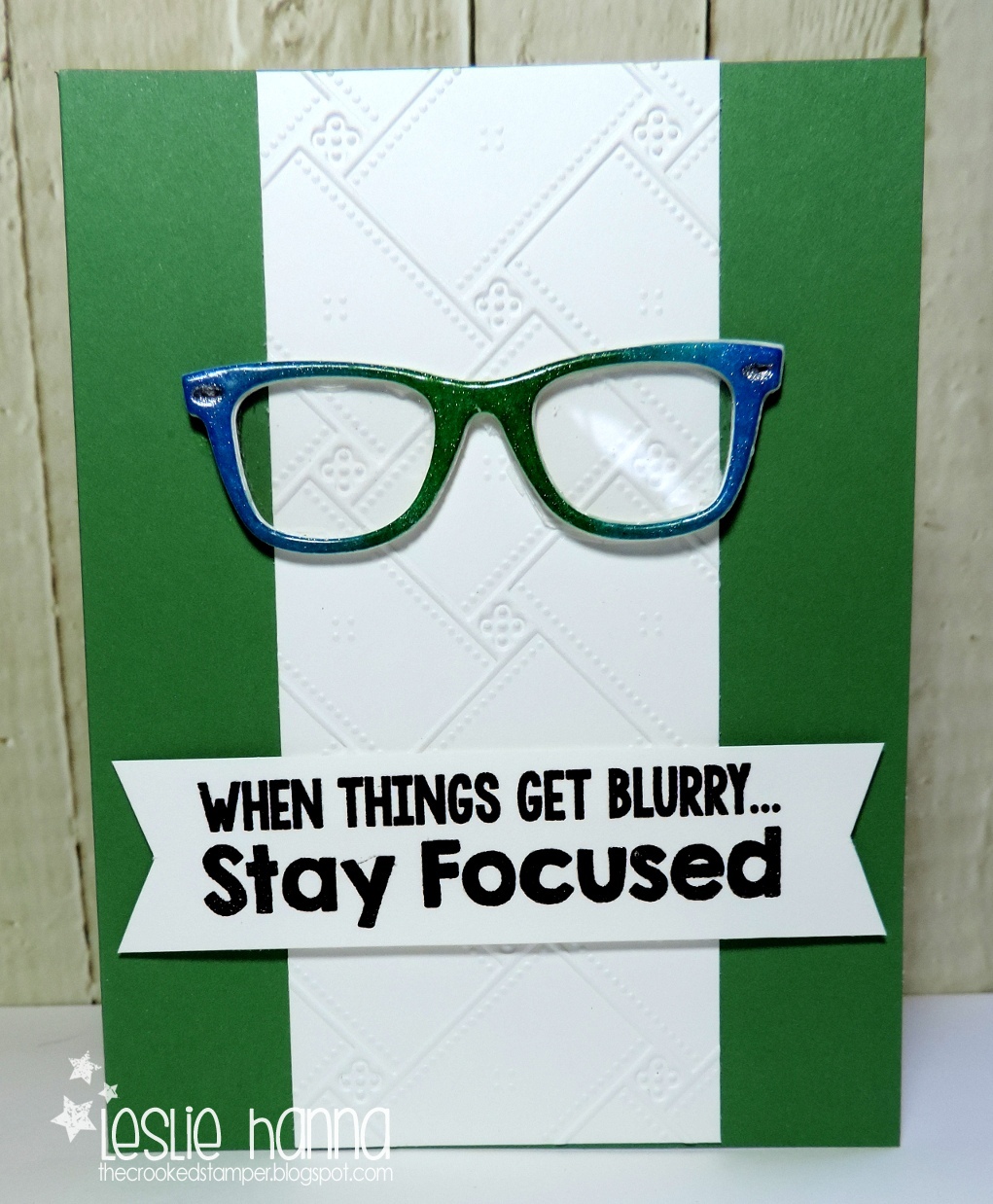 The issue I had with this set of three pairs of glasses was the tiny pieces on the tops that I wanted to make silver. Let me warn you those babies are very very teeny tiny and tough to keep track of. With all the stacking I finally gave up even trying, and I embossed these guys with holes where the silver pieces should have been. I later went back and filled them in with some Pearl Pen in Silver Chrome, using a tooth pick to fill the holes. And yes, I do have a jar of tooth picks on my craft desk. Doesn't everyone? 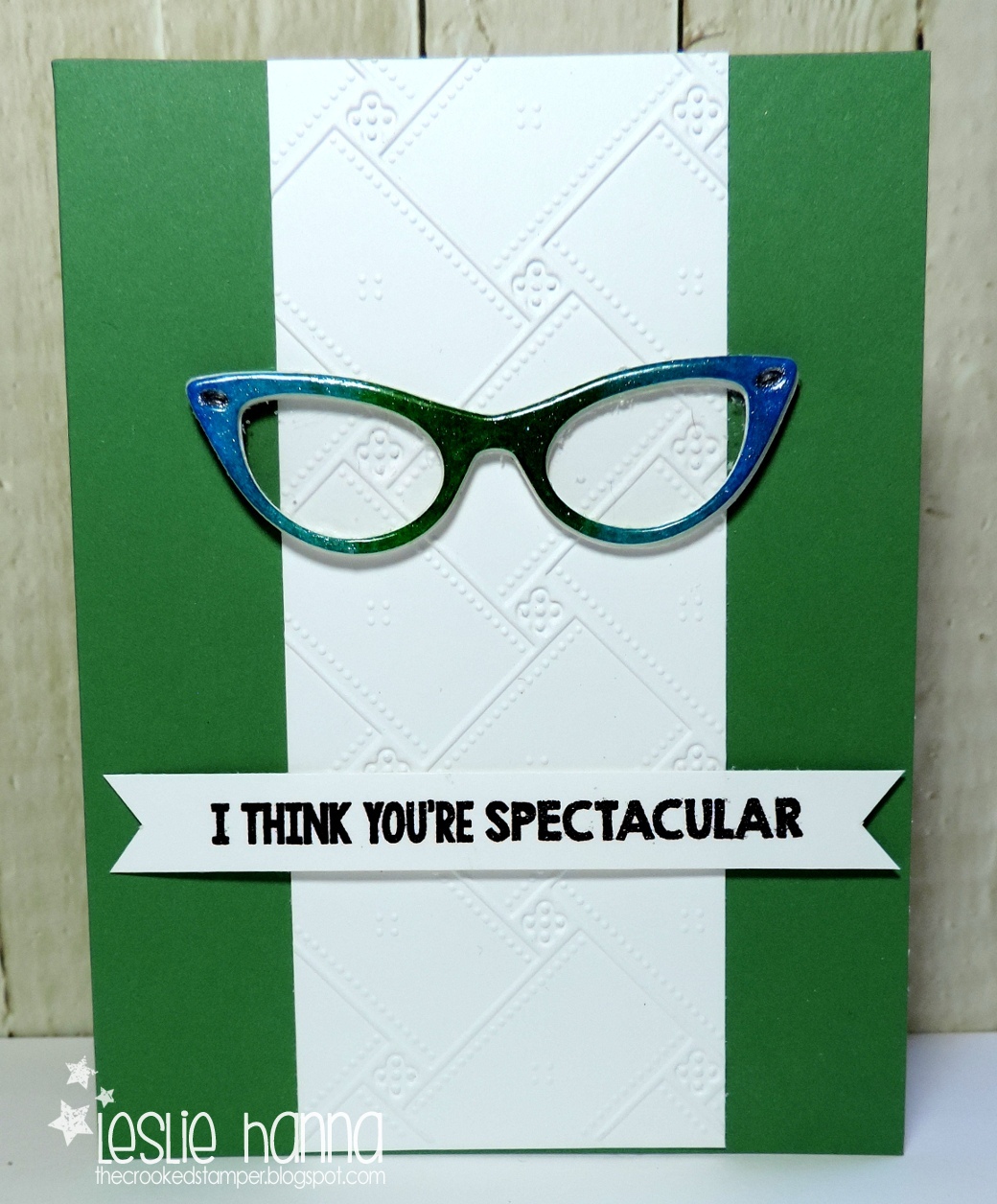 Now that I look at these, that center panel would look better off-center. Sigh. Next time.

In other news, I fell in love with this stamp set because it's encouraging to see that geekdom is being embraced. Back when I was a pup, it wasn't unusual for kids -- even girls, heck ESPECIALLY for girls -- to be smart and geeky. Or maybe there were just so many of us it was cool. I remember at my 10-year High School reunion when one of the guys at my table said to me, "You were one of the smart girls. You don't know me because I was one of the guys out back in the parking lot." Uh-huh.

So, final ruling: You need these dies and accompanying stamps. And if you can master glitter, more power to you. Though I've been told there will be a Glitter Intervention in my world, I am quite happy to live without it. After all, I have my washi tape collection to keep me occupied instead, right?