Under the Same Moon

I am still under the effects of Shopper's Guilt, so I'm trying to use the stuff I bought at Stampaway last Friday, to, you know, justify my actions. I've spent a few days playing and making pretty trash, thus reinforcing my WHY I DON'T GO TO STAMP CONVENTIONS line, even though I did go to this one. It's all about the dinner and getting together with friends. And shopping. Sigh.

So I finally made a version of this I liked: 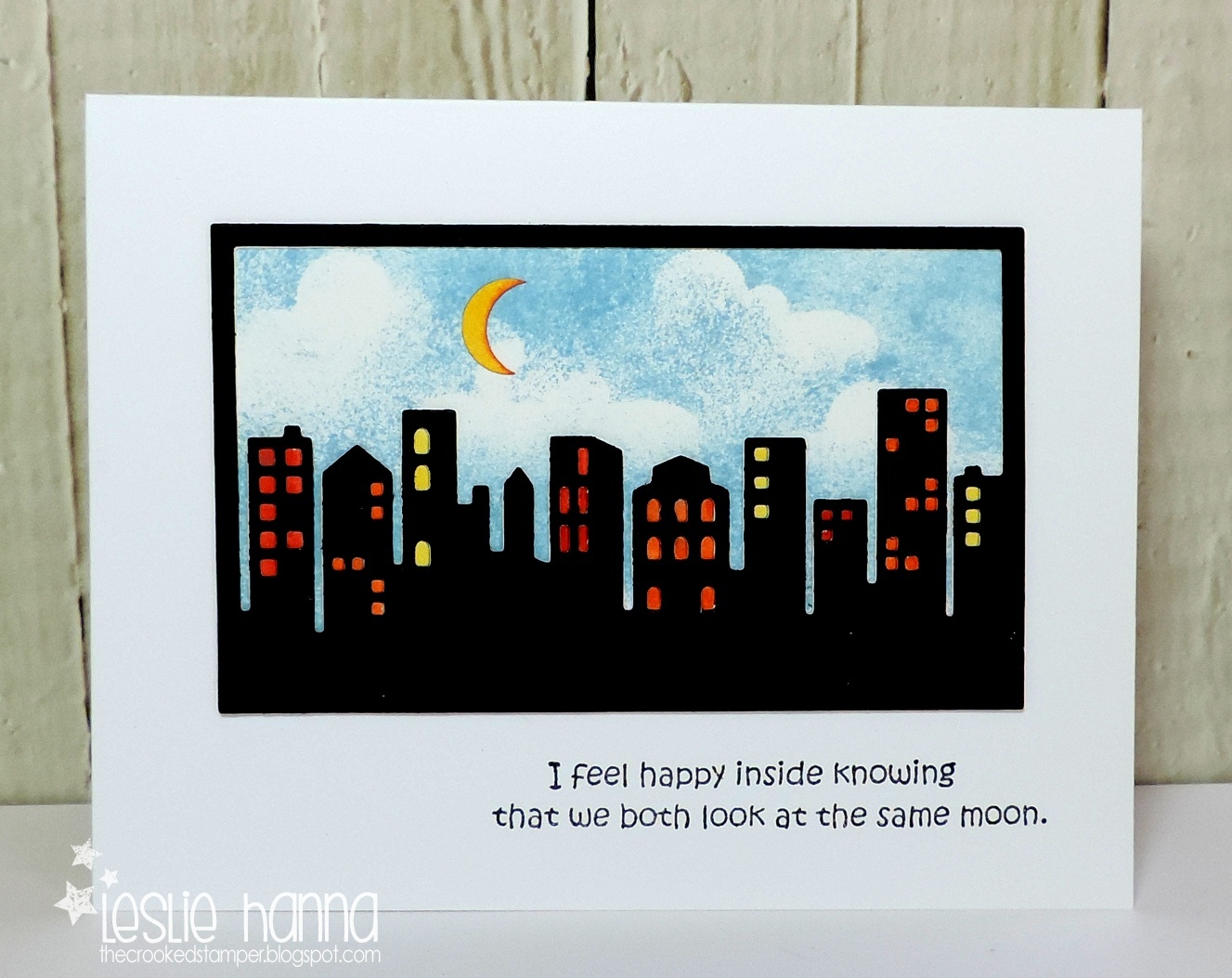 I caved and bought the Taylored Expressions Skyline die, even though I already have one (maybe from MFT) that I don't use. This one is different, though. It has a border. Yep, I needed it.

My original idea was to cut the skyline from white, color it, cut another one out of black, punch out the holes/windows of the black one, then stick them together. Four tries later I got it right. Do you know those pesky windows stick to the embossing plate and fall like confetti? Do you know how difficult it is to put them back in? Did you know that unless you stick the skyline to something there is nothing for those windows to stick to? Do you now understand why it took me so many tries?

Note: having a two-layer thickness makes the top of the frame less bendy, at least for me. This is important in the next step.

Next I made a sky using Pool ink instead of a lighter blue since I wanted it to be more of a night sky. I trimmed this piece to just smaller than the skyline frame and stuck them together. This is where you appreciate the non-bendy top part of that frame.

Now you can put the missing windows back in. I put a drop of glue from my Zig glue pen into the holes, then used my Pick-Me-Up tool to grab the little buggers and put them into the empty windows. Once I was done filling in the missing windows, I colored them with my markers.

I didn't have a moon the right size, so I had to make one. I used a 1/2" circle punch, punched out one hole in a piece of white scrap, then shifted the punch to one side to create a crescent. I colored it with markers and glued it down.

This whole project was driven by the Stampotique sentiment stamp I've had on my desk forever. I knew I could use it for this card then finally put it away.

Now that I know what I did wrong for the first three tries, I can make another one of these some day and I won't be so whiny. I really do like how it turned out.

If you have this die and you know of an easier way to do this, I'm listening.