You Are The Best

Here's another card I made during yesterday's play date: 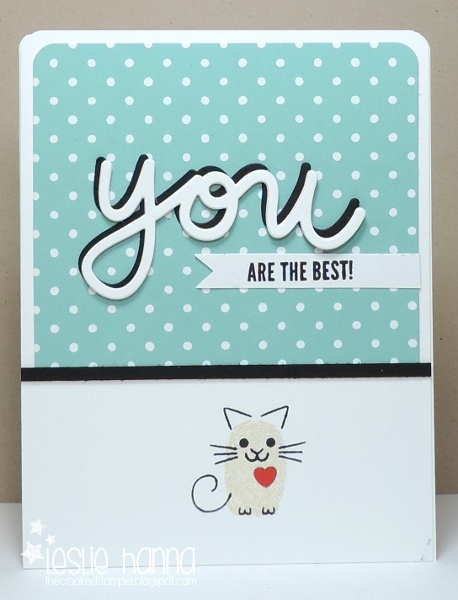 This card is the result of me trying to use some more of my new stuff. I've used another Lawn Fawn notecard (this time as background paper), and new Clearly Besotted stamp set that I added to my shopping cart without paying enough attention.

A side note: I know a lot of people who put things in their shopping carts at online stores, then come back later to actually buy. Instead, I add things to a wish list. This way I can pick and choose what I want to buy when I'm ready, and I never lose the stuff I want but don't plan to buy right now. It's also a great way to keep track of what's in stock or not. In my case, I was so excited that most of my wish list was in stock, I went click click click and bought most of it. That's how this set ended up at my house.

I won't bore you with the failed iterations of this idea, but let me tell you: there were a few. I die-cut the you from the Simon Says Stamp Big Love You several times from white and once from black ... it really needed the contrast.  The rest of the sentiment is from the SSS set of expressions that go with the you dies.

For the bottom, I broke out my Clearly Besotted In Print set. This set is so fun, but mostly if you have little kids, which I do not. I had played with the set, stamping a bunch of the finger prints onto a piece of white card stock with Hero Arts Soft Tan ink, then went in with each of the critter images and stamped them over the finger prints. Stinkin' adorable! That's how I decided I needed to use the cat here.

While I assembled my card, I tried a layer of black under the blue panel, but we decided it was too much. But after I'd built the card, I felt it was missing something. I tried a strip of black card stock, and it was perfect!

For my last act, I added a red heart from some Pretty Pink Posh bling I bought in a weak moment.

Even though it took me hours to make even three cards, I did use a bunch of new stuff, so it wasn't a total loss. Also, my pal decided she needed to maybe borrow that finger print stamp set, and I think she's made her Christmas card for this year. #WIN

PS: Since the Soft Sand ink is "Kraft", I'm going to enter this into the Simon Says Stamp Flickr Challenge. :)