Here is the second card I made for the current Jingle Belles Fa-La-La-La-La prompt: 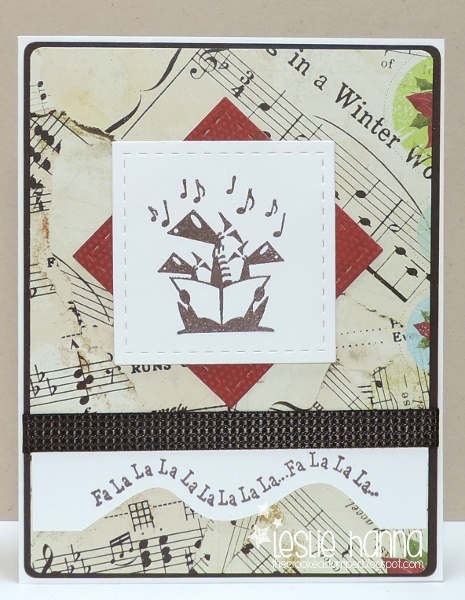 When I finally found these stamps, I realized the glitch in my stampy organization system. For some small companies whose wooden stamps I've collected over the years, I keep all that company's stamps together. Well, in this case the Christmas stamps were in with the other stamps from that company, and not with my Christmas collection of ALL THE CHRISTMAS THINGS. No wonder I couldn't find them.

Enter: The Dilemma. Do I break up a set* and put these in with the holiday stuff? Will I remember where they are next year if I don't? Will the Earth fall off its axis if I mess with my system? So I took a deep breath, and when I was done, I put these stamps away with the holiday stamps. It is done.

So about the card, right.  I stamped the pups with Memento Luxe Rich Cocoa and clear-embossed them, then die-cut them with my Lil Inker Stitched Mats: Squares. I cut the same size square from a piece of patterned paper and put it behind the white piece for contrast.

In addition to the singing pups, I used a piece of musical paper from the same paper pack as the red piece.

Now about that sentiment: I love it, but it's a bear to figure out how to stamp on a card front that really works. It's kindof wavy. I suppose I could make a one-layer card (*horrors*) and not deal with it, but ... whatever.  I chose to fussy-cut it, and when I'd done the bottom I stopped and got a clue.  I know me pretty well, and I'd probably muck up cutting the top part, so I left it straight and un-touched.

Now I needed a solution for The Join to make it look like I meant to do that. Since I was in brown mode, and had used SU Early Espresso card stock for the layer, I looked through my cache of unopened SU ribbon and found this spool of Early Espresso, so it was opened and used. go, me

That's it, there is no more. I made two holiday cards in under an hour last night, and it was very therapeutic. Stamping is good for the soul!