Once again, the rains stopped and we had lovely weather for today's market. We even had two more new vendors, so the place was hopping! 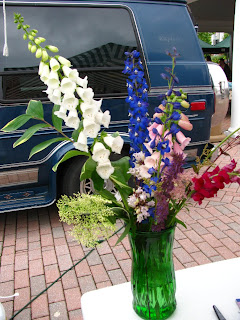 I struck a deal with the current flower people to display a vase of their flowers in my booth and hopefully help drive traffic down to their tent. I get discounted flowers out of the deal. Aren't these pretty? 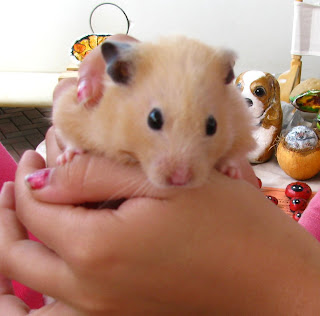 Three girls from across the street came by to talk to the Rock Lady about commissioning a likeness of this little guy. He was really cute. They told me they put him down all the time in the house, but I had to talk them out of putting him down at the market, because we were in a busy, noisy place, and I was afraid he'd run away. They listened to me, too! Hey, old ladies make sense once in a while. :-) 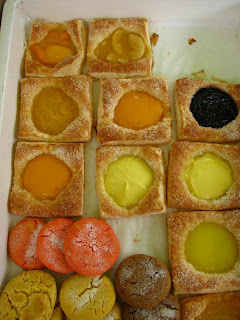 Then I wandered over to the bakery booth. O.M.G., would you look at these. I bought a custard one, and right now it is sitting in my kitchen, waiting to be my dessert later this evening. 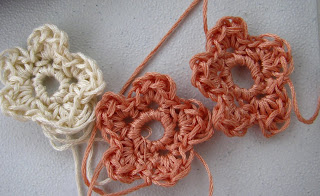 I worked some more on these guys while I was sitting and mostly not selling. I found the directions here, and I opted to do only the first layer. I think I'll make some cards with them later this week. I might even make some extras and see if some of the card-makers that don't buy my cards would be interested in hand-made embellishments. Hey, it keeps me off the streets. 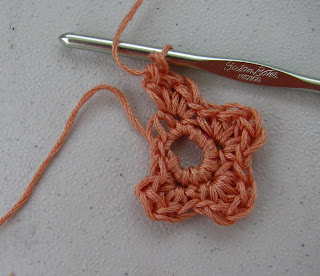 This poor flower is a partial, because I ran out of that color DMC floss before I could finish it. And to think I used to be a Girl Scout. I certainly was NOT prepared for this! I wonder if I should finish it with a different color and put it in a bouquet or something. Hmmmm ... So many possibilities! 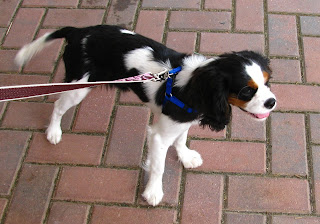 Over-all, today's sales were reeeeeeally slow until about 12:30, when I had two really, really, REALLY great sales, which pretty much made my day. One woman bought 10 cards, and when I questioned her motives, she asked if she was allowed to buy them, and of course I let her! I also sold two boxes of cards, and I almost never sell boxes of cards; I just like carrying them around all Summer. Yay, me!

One of my customers told me she'd bought one of my cards at Chloe's, the coffee shop across from the Market where I have my small box of cards. I thanked her profusely, and she bought a few more from me today. I think my favorite part of selling face-to-face with people is hearing how much they like my stuff, and most of them even appreciate the amount of work that goes into them. It just makes it all worth it.

When I got home, I tackled The Table. I need to get serious about making projects for next weekend's Stamp Camps, so my first step was to start putting stuff away. Me being me, this usually involves major distractions, and today was no different. 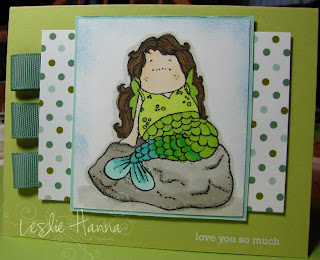 This little lady (stamped image compliments of Kristie) was colored, matted and layered a few weeks ago, and it was lurking in the piles of stuff on the table. As I cleaned, I felt compelled to finish the project, so I added a few snips of PTI Ocean Breeze ribbon and a(n) SU rub-on sentiment. She's been bagged and tagged and put into the box for next week. I think she'd be a cute card for a Dad to give to his little mermaid. :-)

Okay, time for me to finish "cleaning" so I can spend tomorrow creating with 100% SU stuff. Hopefully I will be successful and I'll have something to show you. I'll also have a Krum update - I have new pics! ;-) I have also been remiss with my UHC Monday posts, so I hope to get to that tomorrow, too. Wow, I'm tired already ...