Pink is not my go-to color, so when I chose National Pink Day (celebrated on June 23rd) as today's Under-Appreciated Holiday Challenge, it was truly a challenge for me! I had originally selected a different paper, but I was simply not feeling the love. While rummaging in my stash, I found this piece of A Muse paper, and it was pink, so, well, you know ... 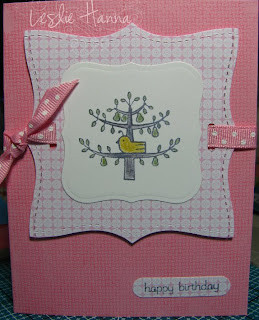 I combined the UHC challenge with something I saw on a blog or on SCS - how to cut a square and a circle with the SU Top Note die. It's too easy!

Cut your first die shape as you normally would. Then turn the cut-out shape 90 degrees and line up the points - eye-ball it to center it on the die, then run it through again. Ta da! A square! And you'll get two bracket shapes and two photo corners out of the deal, too! 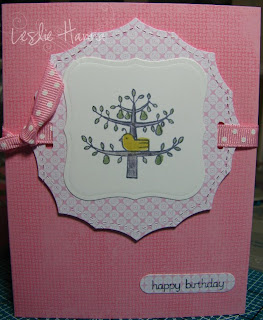 To get the circle, turn the cut-out square shape another 45 degrees and run it through again, then repeat. Ta da! A circle!

As for the other parts-is-parts: I punched slots for the ribbon with my SU Horizontal Slot punch; the ribbon is from my stash; I stamped the SU Aida background stamp in Pretty In Pink on the Pretty In Pink base; The sentiment is A Muse and is stamped on a piece of the same paper and punched out with the SU Word Window punch.

Now about that bird and that tree. The more I thought about it (read: after it was colored and stuck on the card), I realized it is probably a partridge in a pear tree, and I am only 6 months off in using it. So who wrote that rule?! I say it is a yellow bird in a pear tree, and it has nothing to do with a certain December holiday. Pttttht! 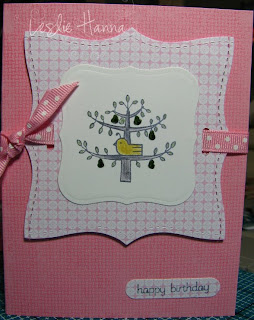 Then I decided the tree looked too boring, so I went over the pears with a green glitter pen. Now it really looks like it should be December, huh? :-)

I'll be back later with a car update (see my earlier post) and at least one more card I've managed to generate today. All scraps!!!!