Ya know how sometimes in order to do one thing you need to do something else first? Or in my case, about twelve things? Since no one can figure out why it takes me forever to do anything, I thought I'd record today's activities for posterity.

Goal: Move the library card cabinet into the Captain's Quarters.

Let's get started with a pictorial of the "before". Here is the library card catalog in spot #2: 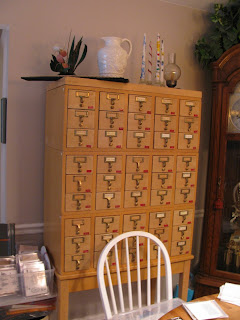 The bottom two sections of drawers are filled with my embarrassingly-large CD collection. The top section of drawers actually have index cards in them. The object of my attention today ... this whole piece of furniture must be moved into the CQ.

Now let's take a look at where we think it will fit. This is one of the walls of storage cabinets in the CQ: 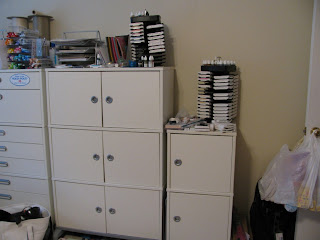 Please focus on the small one to the right: 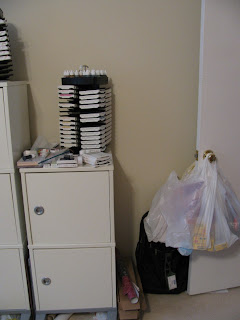 If that small section of storage were to find a new home. the space between the 3-level cabinet to its left and the edge of the door is: 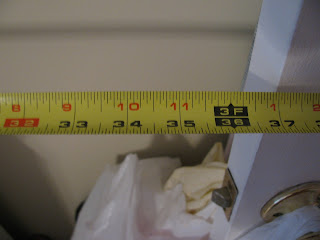 ... just over 36". And measuring to see how the depth of the card catalog will fit: 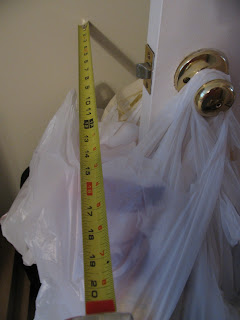 ... see the 17" mark? That's how far it would stick out into the room/doorway. I wrinkled my nose over this when BR#2 was here, until she pointed out that the bags hanging on that door knob stuck out 20". She's right.

So where do we think this 2-section storage thing will live? Gotta find it a home, right? Well, there's this spot: 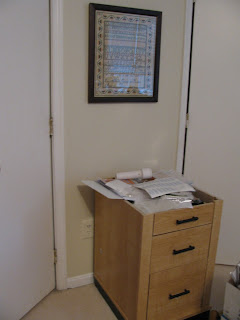 That ... thing is a part of my desk that used to support an L-shaped desk section that I took down because it took up too much room and was just a collection spot for STUFF. The drawer section has no top ... I keep meaning to get one, but, well, you know.

Let's measure the card catalog one more time, just to be sure: 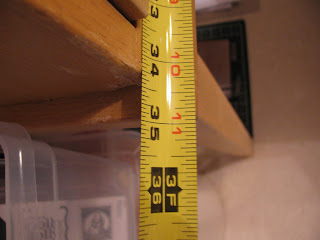 Okay, now for the "gotta do 12 other things before the one you want" part. In order to take the Card Catalog apart, it needed to be empty. To empty it out, I needed to remove the drawers, which contained all my CDs. I needed somewhere to put these CDs, so why not put them back where they originated: a cabinet in my front hall. But that cabinet was moved into the Dining room: 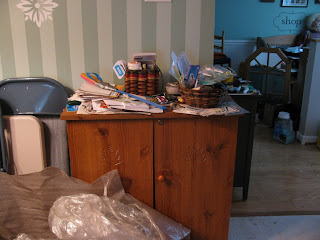 (For those of you wondering, I actually did take that packing material and fold it nicely and stack it up in the kitchen a few weeks ago. I have a ton of it. Anyone need packing material?)

... to create a spot for this green cabinet in the front hall: 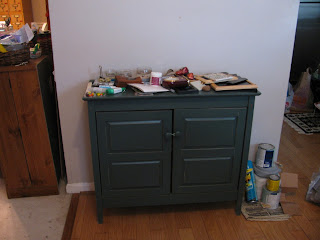 (You may recall that this green cabinet used to live where the card catalog lives now. Just think of it as musical chairs and you'll do fine.)

So I dragged (drug?) the green cabinet into the Dining Room, then set about moving the brown cabinet back to its original spot.

Unfortunately, that brown cabinet is not only a put-together-yourself cabinet that weighs about 15423 pounds without the CDs, it is old, and was partially limping before I tried to move it, and it broke totally when I moved it to this spot. Moving it back was going to be a Herculean task. And it was.

I had a hair-brained idea that if I took off the two doors, it would not only lighten the piece enough to move, but allow me to flip it over and re-attach the bottom support that ripped of when I moved it the first time. (Lesson #1: Don't ever attempt to move this stuff.) So I unscrewed the doors, one at a time, and the first one ripped off with screw #6 of 6. Did I mention these doors are heavy? The first one fell onto the carpet, which was okay with me. Most of the VHS tapes even stayed in place. Cool.

Then I got another hair-brained idea to support the second door so it would not fall off with the removal of screw #6 of 6. I am capable of learning from my mistakes. I am. No, really.

So I supported the open door on some cans of varnish I had conveniently stored next to the cans of Raid. They did not work, and that door crashed to the wooden floor, spewing its VHS, cassettes and CD contents all over my kitchen. Okay, at least both doors were off; time to re-build this baby.

The screws for the base that had ripped off had destroyed their holes, so they had nothing to grip. No way they were getting re-screwed, and drilling new holes today was not gonna happen, so my only option was to put the cabinet where I wanted it and carefully place the support where it would, well, support the cabinet. Oh, yeah, I know - this is scary stuff, but c'mon, I had 250+ CDs that needed to go SOMEWHERE, and I did not want to move them twice.

So I dusted the inside, outside and underneath of this thing, screwed the doors back on, and began to transfer the CDs out of the drawers of the Card Catalog and back into the cabinet.

FINALLY, I got to begin on the card catalog! One at a time I took a drawer out of here ... 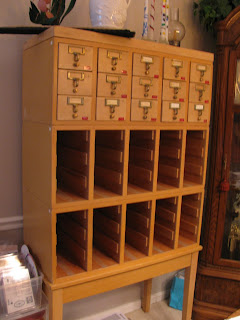 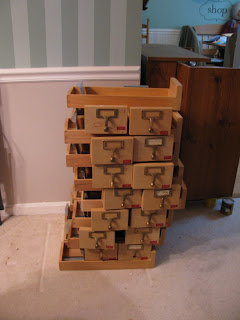 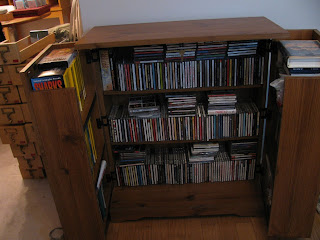 DONE! All back the way it started a few weeks ago. 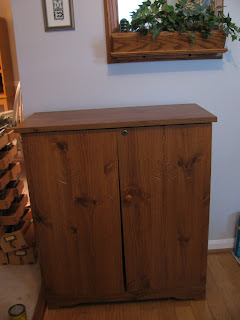 I did move the cabinet a little to the left in the front hall so I can move a chair to the right of it in place of all the cans of varnish and paint and Raid. See? I do have a plan!

Then I took apart the card catalog itself.

Here is the base: 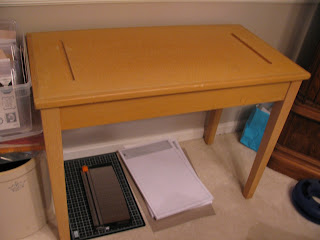 ... and here are the heavy parts - the drawer sections: 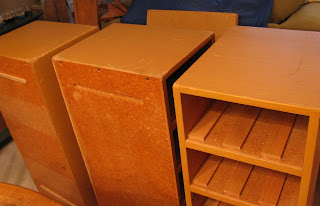 Next up, I'll move stuff around in the CQ, then move the base into place to see if it fits. Let us all pray that it does, or I am in deep doo-doo.

I'll be back later with another installment. Are you tired yet? I know *I* am!

Thanks for stopping by!
Posted by Leslie Hanna at 1:38 PM

Email ThisBlogThis!Share to TwitterShare to FacebookShare to Pinterest
Labels: Domesticity