I don't know about you, but at any given point in time, I have no fewer than seven projects in my staging area. Either papers I've put together that I think will work, or stamps I want to use together, or things I've started but could not finish, so they were set aside. LOTS of those. In fact, the other day I stood there, hands on hips, talking to the cat about the mess on the Captain's Table, and I took out the camera and documented the chaos for posterity.

So last night, instead of picking up one of my in-progress projects, I had a completely different set of ideas in my head (yes, MORE ideas), and I made those instead. I'll be blabbing about those cards this time, then tomorrow you'll get to see the mess. Promise.

Both of these cards are almost 100% Papertrey Ink content. You know me: I am an equal opportunity hoarder, and I collect PTI in addition to SU and Basic Grey and {insert company name here}. For these two cards, I used SU punches for a little something-something, and Linen Thread to tie the buttons. One thing I love about PTI is they have done all the work for me with the color combos. Like this: 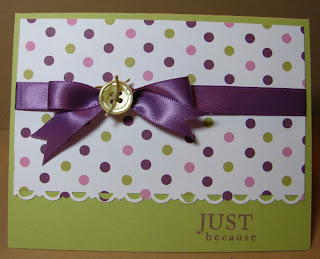 A pattern with one green and two purples. Put the paper on the base of one color and use the ribbon of another - done! Quick and easy.

This next one - same thing: 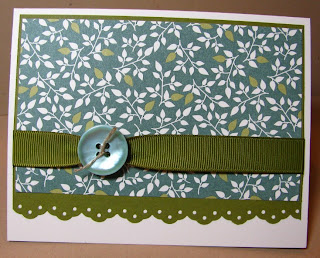 I just used the green in the paper pattern as the layer color and added a button of the other color. Actually, now that I look at it, I think that button is a different blue, but it works, so no biggie! And maybe that green is wrong, too. Sigh ... but you know? I like it! I called it DONE!

In other news, have I told you I need to refile my 2007 and 2008 income taxes? Uh-huh. All of this stampin' is what I call "creative avoidance", because playing with all that paperwork and forms and stuff, even with TurboTax, is a royal PITA, and who wouldn't rather be stamping than doing taxes, anyway? So far, I've managed to find all my back taxes, and backed up the files to a CD, so when I go in to make changes, I do not wipe out what I've already filed. Just my luck I'd be audited for that tax year.

While talking with my IRA company rep, I decided I should look into doing 2-3 more shows per year so I can have the money to pay an accountant take care of all of this silly paperwork. That would leave me all sorts of time to play! I'm liking that idea. Seriously.

Anywho, that's all I have for now. I hope to post my crafty mess tomorrow, unless I get inspired again and do something else. :-)

Thanks for stopping by!
Posted by Leslie Hanna at 6:52 AM