No Balloons Were Harmed in the Creation of These Cards

This post was going to be a painfully detailed explanation about why I do not like futzy projects, complete with twenty seven eight-by-ten color glossy photographs with circles and arrows and a paragraph on the back of each one explaining what each one was, but GIMP, my photo-editing software (yes, I DO edit these ... lemee alone) blew up mid-edit at least three times, so I decided to cut my losses and quit while I was ahead. And THAT, my friends, might be the world's longest run-on sentence. Whatever. YOU are the winners, because I only managed to crank out 4 pics in an hour, so that's all you'll get.

Tonight I decided to play with the remaining PTI patterned papers from this post, and I ended up with a layout totally different than I'd expected. Check it out: 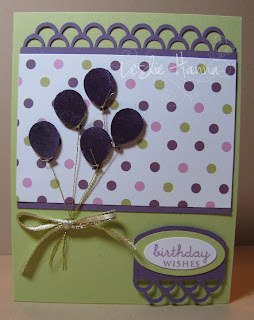 LOTS of stuff going on here. As you can see, I broke out one of my new MS punches. It's kind of busy for this patterned paper, but I wanted to live dangerously. I had the obligatory ribbon out (this time, I'd selected the pale purple color to match the dots), but once I started to "fill in" the blank spaces with balloons, I decided to make the balloons front & center, so I had to skip the big, purple ribbon. (I KNOW!)

The balloons are done using an old SU punch. I originally painted the tails gold, then I ended up cutting them off and replacing them with gold thread. I kinda like how they came out. The ribbon holding the balloon threads was a scrap on my table from Christmas.

I struggled with the sentiment piece. Tried it all sorts of ways until I ended up with what you see here. I had originally tucked it under the main piece, but decided it needed to stand free(ly). Square was not making me happy, so I rounded the top of it. Eh, it's okay.

Here is some detail of the gold threads tied to the balloons: 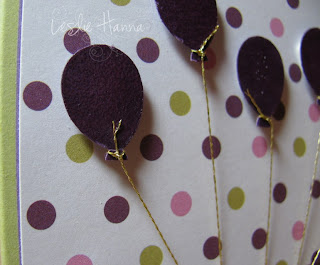 The balloons are darker than the card stock layer because I colored them with my Versamarker and embossed them with clear EP. Have I mentioned futzy yet? I only blew them onto the floor three times. Did you know that when you use a metal tweezers to hold down one balloon while heat-setting it, the metal gets really, really hot? Ask me how I know.

Not totally satisfied with my first effort, I went in for another: 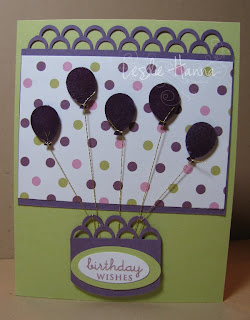 This time I decided to turn the sentiment the other direction and have the balloons hold it up like a hot air balloon. It only took me 20 minutes to figure out how to deal with those threads. And yes, I tied 5 more of them to the balloons, THEN tried to figure out the basket part. I'm telling you, *I* was nearly a basket (case) after this one.

Look what I did: 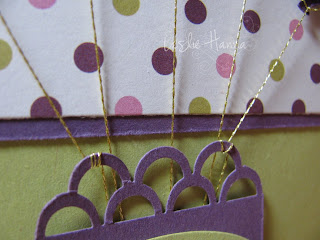 The middle three threads are just taped down to the card base, and the tape is cleverly hidden by the basket. Only the two side pieces are wrapped to look like they are holding the basket.

Well, THAT was a lot of work, especially since the original two cards took me about 10 minutes to make. Given my druthers, I think I prefer the 2-in-10 variety, but these were a good exercise, nonetheless. I do think it's safe to say I will not be mass-producing these. Oh, yeah.

That is all I have to share this evening (OMG, it is NIGHT!)

Thanks for stopping by!
Posted by Leslie Hanna at 9:16 PM