I have been sad lately, thinking about the bazillion sketch and challenge sites I follow and used to actually DO, and now I just look and sigh and move on. Why? Why, indeed! So tonight I did several all in one card! I did! 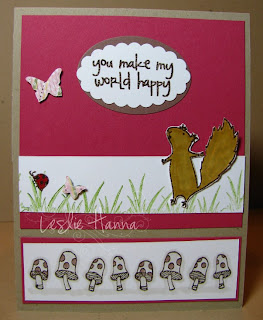 This is SCS Wednesday Sketch Challenge 263 (SC263) + the SCS Wednesday Tutorial Easel Card + it COULD qualify for the SCS Monday Clean & Simple (CAS49 - Cut It Out!) cuz I cut out the squirrel, but it is not C & S, so maybe not. PLUS, I opened and used my new Hero Arts Woodland Creatures set that jumped into my basket during my last Angela's run, because the critters are so stinkin' cute!

Most of the stuff I used on the card was left over from other projects. The white layers were all pieces of PTI White that were next to my cutter; the Rose Red card stock was left from kit prep last weekend; the flutterbys were left from last weekend; and the Kraft was also next to the cutter. Even the Memento brown ink was already out on the table! I really only needed to grab a few Copics to finish it off. 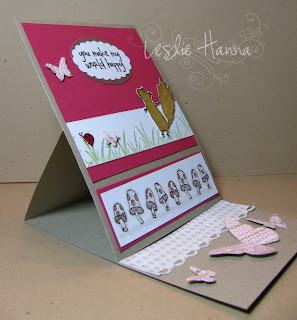 Always the rebel, I ignored the card dimensions in the tutorial instructions and instead made my card 4 1/4 x 5 1/2, folded on top. The really easy part of this card is the front is a separate piece until the very end, so you get to work with it without having to mess with the rest of the card base.

The most difficult part of this card was the inside, because, well, I don't do card innards. But I had to in this case, because it's that strip of paper on the inside that holds the card open, and it said I should place it about 1/2 way up the inside of the card. Well, *I* think that totally eats up the writing room, but maybe that's just me.

Since my tail is all floofy for having accomplished this masterpiece of combined challenges, I'd like to point out the floofy tail on the card: 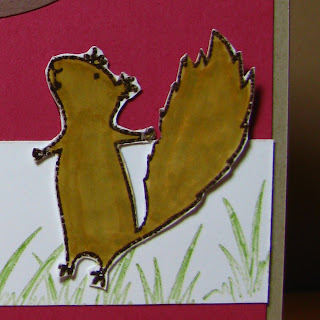 Do you see that it is popped up off the card? (And no, he/she is not wearing a bracelet, although I could say I meant to do that. Nope. In order to cut out the white part under his arm, I had to cut his little hand away from his tail, and it got bent in the process. I could go back and add some color to it. Or not.) 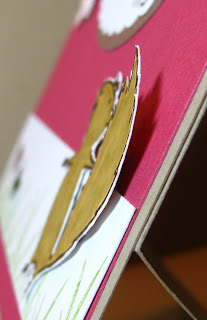 How ever did I manage this? Pthththt. It's 3 mini glue dots all stacked on top of each other.

And since I am a Full Disclosure kinda gal, let me tell you a secret about the flutterbys. This one was first: 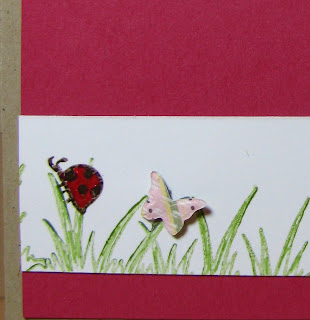 It was added to cover up a grievous error on my part. You see, I thought I'd add some glitter pen lines or dots to the grass to make it look like dew. And it would have worked, except the glitter pen I had out was silver, not clear. Last I checked, dew is not silver, so now I had a silver, glittery line on my grass, and I was not starting over. My only option then was to cover it up. Remember, there are no mistakes in stamping; only opportunities for embellishment.

Once I'd added that first flutterby, I decided there was a big empty to the left of the sentiment, so I added another one. The other three naturally went inside to fill up all that space under the easel support strip.

I like this style of card so much, I suspect a variation of it will make its way into my February Stamp Camps.

In other news, I made a second baby card so my custom order person had a choice: 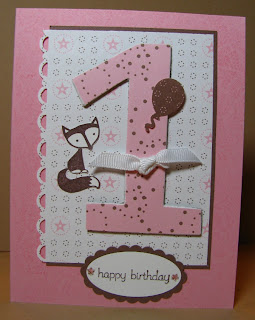 She actually chose this one, too. Isn't that little fox a cutie?

That's all I have for this evening. I think I'll kick back and catch up on some more blog reading. I am hovering around 700 unread. Sigh.

Thanks for stopping by!
Posted by Leslie Hanna at 8:00 PM