I'm baaaaack! Did you know for $5/year you can buy 20 gig of space on Picasa? Well, you know now! :) In my absence, although I was mostly a slug all weekend, I did get some stamping in. Let's see what came out of that effort, shall we?

First, in my effort to use the new stuff still in the bags from the LSS, I used two new stamps on this: 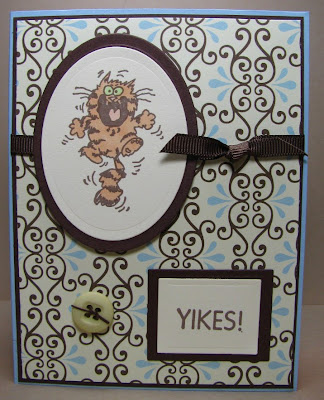 The cat and the YIKES were purchased together, so that part was easy. I wandered aimlessly around The Captain's Table - or rather "stepped carefully" around it, and re-discovered a box of patterned paper remnants that included that brown & blue piece, from which I cut 4 pieces. I futzed with this for hours until I ended up with this layout. The first version has blue ribbon to match the base. I like the brown better, and I'm officially no longer in love with the blue base. I'm thinking it should have been a blue layer on a vanilla base, but oh, well. And it took me about an hour to select that button. Seriously.

Next, I finally found my droopy dog stamp (I'd put it away - no wonder!), as I wanted to use it with the Hound Dog sentiment, thus(ly): 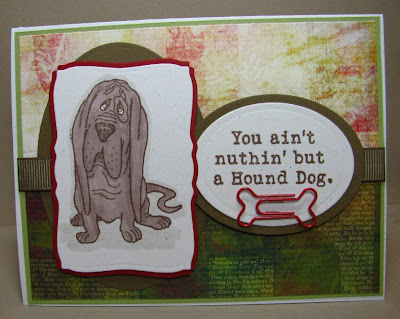 Meh. It's okay. I think I should have left off the red layer around the dog. The patterned papers are from the Basic Grey jovial pack, left over from a Christmas Card Extravaganza from last month. The bone embellishment is from my stash. 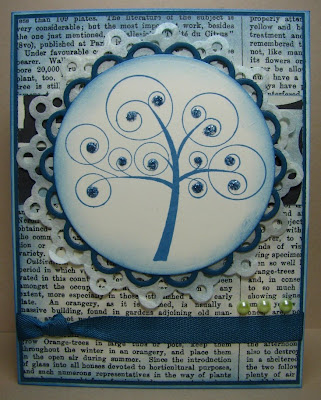 This is me, trying to layer. The tree stamp has been on The Captain's Table for-ev-er, and I'm just now using it. The blue ink is Ranger's Blue Jeans, and I used a LOT of it. This card caused me much angst, it did. You'll notice the doily layer from the ones I'd cut with my MFT die; I struggled with the many layers of patterned papers and finally ended up with the one horizontal piece behind the circle layers; the blue is all SU Not Quite Navy, except for the ribbon which is PTI (a poifect match, too!) At the last second I added green (!) pearls. I was torn between going mono-tone and adding some color, so I added color you can almost not even see. It's how I roll. The stickles on the tree are Ranger Distress Stickles.

I've also been slaving over some baby cards, but I'll save that epic for another day.

In other news, back in my Time to Make the Buckeyes post, I alluded to a crazed squirrel climbing all over my screens. Tonight, I give you proof. Please observe: 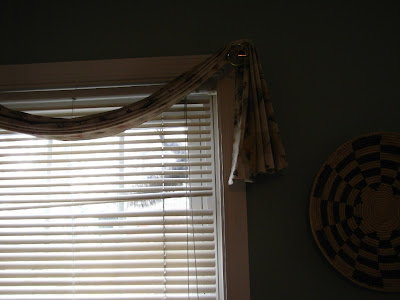 Didn't see him? How about this: 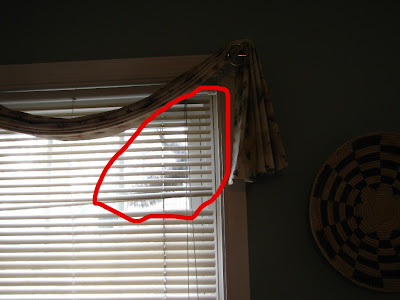 (I have full screens, by the way, so this is physically possible for him.) Yes, in that pic the little bugger is digging (DIGGING!) at the edge of the window frame to ... what ... GET IN?!

Here's another shot of him: 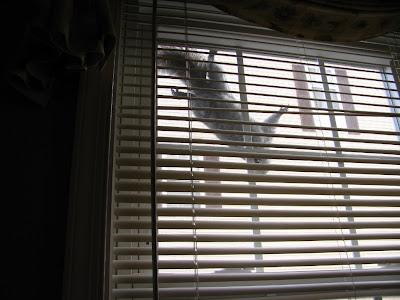 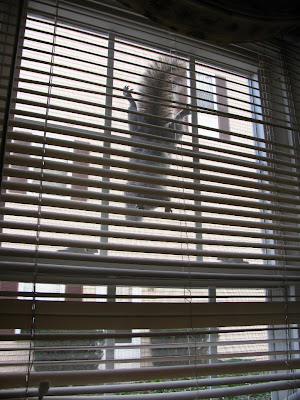 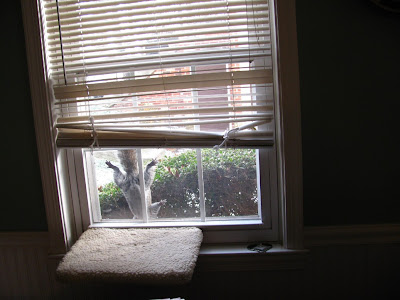 Oh, and yes, I need new blinds. It's been on my list for years. Those handsome rope ties are doing just fine, thankyouverymuch.

I'll say this one more time: squirrels are varmints! VARMINTS! They are the reason I can't put out bird seed for the birds - the squirrels keep the birds away and eat it all themselves! VARMINTS! However, the tree trimmers did cut off the lower branches of the huge tree out front - the one with the squirrel nests in it, but still, even homeless, these guys may NOT come into my house. Nope.

Oh, oh, oh - one more thing! One of my bloggy pals, Lauren (uber-talented with the fussy gene), has started a new blog with a weekly Christmas Card Challenge: JingleBellesRock. Go check it out and join in the fun if you can!

Thanks for stopping by!
Posted by Leslie Hanna at 7:12 PM