Finally, the last project for this month's Stamp Camps: 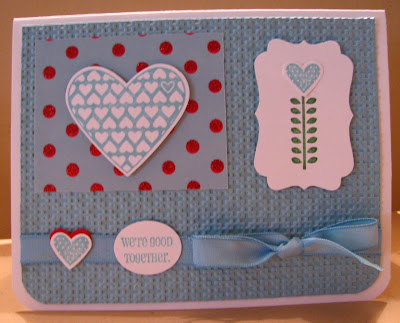 It's a little dark and blurry because I've already moved my lamps back to where they belong for tomorrow. Sorry, it is much worse than usual. ;(

This is a variation of this card I made back in August, when I first got my paws on the stamp set: 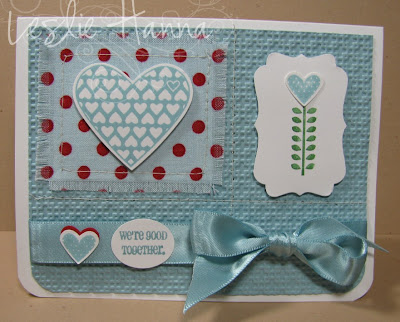 The only differences are (1) no sewing, (2) paper instead of fabric for the red & blue dotted piece, and (3) Marina Mist taffeta ribbon instead of Baja Breeze satin. It's really a busy card, and I hope there won't be too much grumbling. Also, I need to use the same punch as on another project, which is already sharing ink with a third project. I am now officially crossing tables, which is just about as efficient as crossing the beams. But The Ladies are troopers, and they share very well.

I do have one new person coming tomorrow. I sure hope she won't think me totally scatterbrained. ;/

I also finally made the pocket for this purse. I'd originally wanted to make it because of the pocket, so I find it hysterical that up until now I've done everything BUT the pocket.

Here is what I'm blathering about: 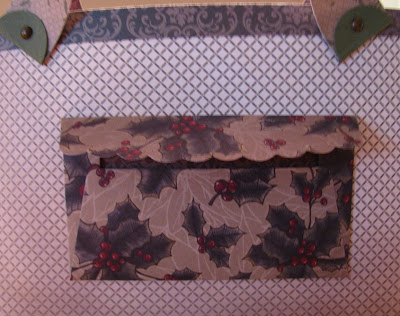 Cute, huh? Here it is closed: 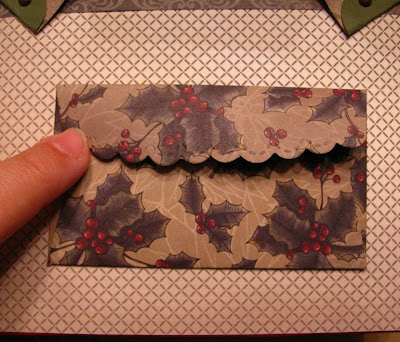 I still haven't figured out how to keep the pocket closed, but I did want to show The Ladies what it would look like, and they can play around with it.

The SU scallopped envelope die is too small to fit a gift card, so you need to trick it. I learned this skill on Patty Bennett's blog with this tutorial. It's sooo easy to do!

You may notice I have two projects that need the Big Shot. Yes, once again: Standard. Operating. Procedure. in my world. So I've pre-cut all the pockets for them, but I'll show them how I did it. I think this project is fussy enough without them having to die-cut the pocket, too. The second Big Shot project is the embossing folder on the Valentine's card above. I may do those, too, as it's another fussy card. Fussy, fussy, fussy. I can hear them now.

So now I need to disappear all of this crap stuff and get ready for tomorrow's sessions: 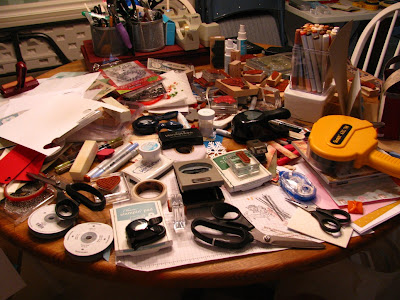 OMG, what a mess.