This weekend my Creative Avoidance was in high gear. I cranked out all SORTS of stuff. I did finally figure out my state sales taxes, too, and to celebrate, I played this week's Sketchy Sunday over at Tiff's blog. 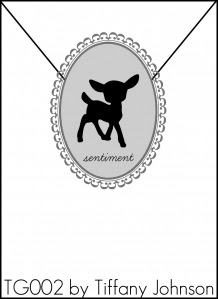 I went into the Captain's Quarters with not a clue in my head. I thought I'd look through some papers on the Heaplet that never got put away, and found a sheet of owls. It looked like it would go with Kraft card stock, and whoa! I had two already-cut pieces of Kraft card stock ready to go. It was kismet. I made this: 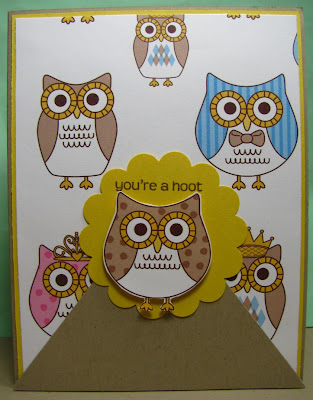 *Note: The card base is Kraft. That green stuff you see behind it is a piece of wrinkled paper I grabbed so the card didn't disappear into the Kraft "photo studio".

I flipped the sketch and used a circle instead of an oval because ... I don't know why. I wanted to. And I have a circle punch but not an oval that large. And I was too lazy to get out the Nesties, though I did think about it for about 2.1 seconds.

It's missing something, isn't it? The triangle of Kraft is too big. And it's nekkid. I cut out two more of the owls (the tiny ones) to put on the Kraft triangle, but it was worse, so I left it alone and did something different with the second one: 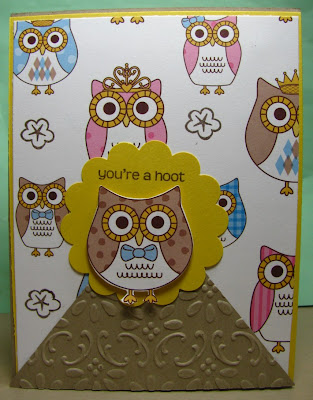 I embossed it! Whoot! (oh, no pun intended there ... sorry). Not sure when anyone would send a card like this. I have about 10 owl cards that say "you're a hoot" and they don't sell. Whatever, *I* think they are cute. And it's close to the sketch, even. Sort of.

*Note: See those flowers stamped amongst the owls? Pssst ... I schmeared something on the card and needed to disguise it. Shhhh ... don't tell anyone. K?

Even if you missed last week's sketch, you can still play! And make sure to do this week's, too. What else do you have to do? Shovel snow? Pthfhtf.

Thanks for stopping by!
Posted by Leslie Hanna at 6:38 AM