Digging Into the UFO Pile

One of the questions I am asked most often is "How long does it take you to make a card?" and I can never give a straight answer. That's because there is no straight answer, and I'm not trying to be difficult. As most card-makers know, the hardest part of making a card is the design. HA! That's a fancy way of saying "futzing".

Sometimes a card's design/layout/whatever that's in my head translates directly to paper, and it's literally a 5-10 minute card. Most of the time, however, it takes hours upon hours, sometimes even days, for a card to come together. This is why so much ends up on my UFO pile... I just give up and put a partially-designed card (or its parts) into the UFO pile and move on to something else.

Now once you get past that futzing stage, reproduction is not difficult. But that first one? Oh, boy.

So today I thought I'd show you what I've been doing for the past few hours. It all started when I sat at The Captain's Table with the intent of using something from the UFO pile. I selected some remnants of paper from a 6x6 pack I HAD to own. Actually, I'd used quite a bit of the pack, but there were lots of homeless partial pieces.

First I made this one: 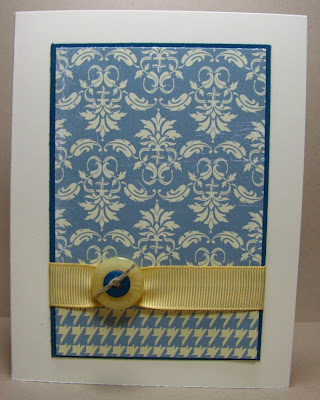 Eh? Not too over-the-top. Pretty boring, actually. The papers are so pretty, I didn't want to cover them up, but I didn't leave room for a sentiment. I thought I might find a black rub-on to put over the top part, but I may just leave it alone and put it in my "Any Occasion" section.

I made another one, but with blue ribbon instead of yellow: 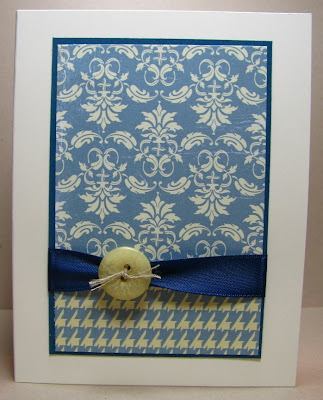 Two was enough, and I needed to do something else. The remnants were staring at me, so I decided to make a patchwork piece from them. Divide and conquer! Yeppers!

First, I took some strips from the UFO pile and stuck them to a piece of printer paper.: 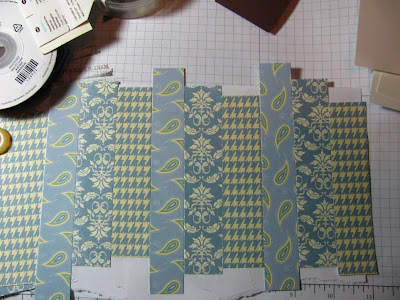 (You can tell when I've used a 6x6 piece for a card front, because there's a 1" strip left over.) After the strips were all stuck down, I turned it 90 degrees and cut them into 1" strips, which yielded rows of 1x1 squares: 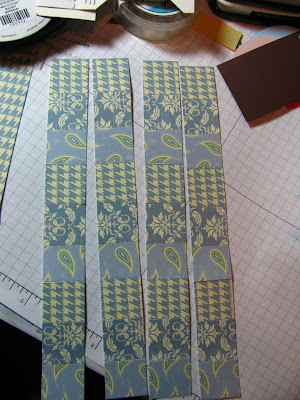 ... and stuck them to another piece of printer paper in a stair-step pattern, like this: 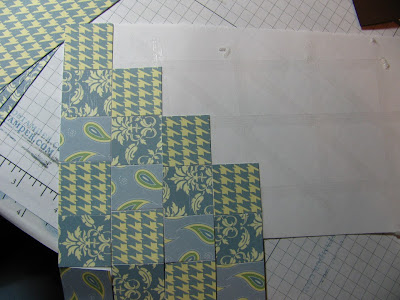 I continued until the whole thing was filled in, then I die-cut the piece to get this: 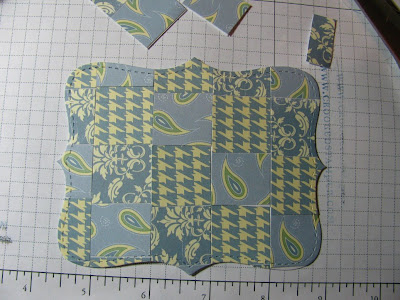 Now you might think that's a lot of work to get rows of 1" squares, and it may be. So I tried another method: punching a bunch of 1" squares, then sticking them down to a piece of printer paper and die-cutting it. This is how that one turned out: 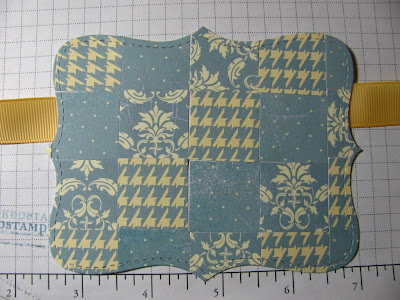 I think it's safe to say that *I* don't have any better luck one way versus the other. I think the 1" punched squares method is easier, but I have more opportunities to mess up since I need to place every single square instead of starting with strips, which are really just a bunch of soon-to-be-squares all lined up. :) I have learned to live with my shortcomings and just embellish to hide as much as I can. It's how I roll. YOU, on the other hand, should do what works for you.

Here's one of the two cards using the patchwork die-cut pieces: 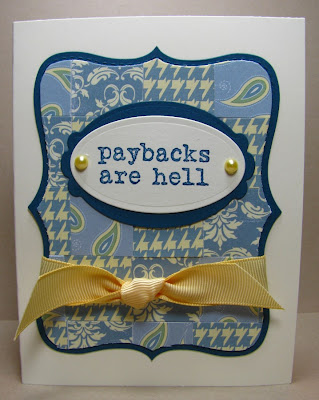 Those yellow pearls are from a pack I got just this morning from Mike's. (yay, me!) 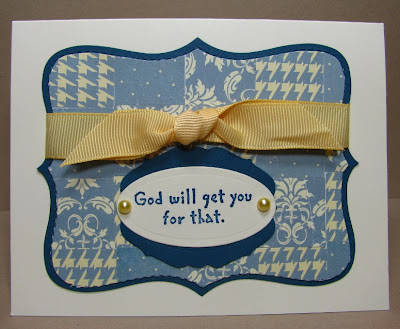 In other news, I tried to print my MDS (My Digital Studio) card, but my printer was having a hissy fit and I failed. I think I'll make it out of paper and ink, though, and use it for next weekend's Stamp Camps. Whoot! When I get to that, I'll do a side-by-each comparison for you.

That's all I have! Thanks for stopping by!
Posted by Leslie Hanna at 4:51 PM