Happy Sunday, everyone! I attempted to get sketchy today, but my output was not what I'd hoped. Also, I found another stack of "do this sketch some day" print-outs, so I'm not even close to being done. I am, however, making a dent in the UFO pile and the Heaplet, so there's that.

Today I headed to VA to pick up some items at Angela's they were holding for me. I seriously thought about just having them ship it to me so I didn't have to go into the store and come under the influence of whatever it is they pipe into their air system. But nooo, I went there, and as a good consumer, I purchased. I am weak. But I did break into some of the new stuff this afternoon, so even though I don't do "new loot reveals" en masse, I do tell you when I've broken into something new, so just pay attention and you'll see it. (*waves* Hi, Karin!)

So here's the only official sketch I managed to use this afternoon - FTL (Fall-to layout) #124 from Clean & Simple: 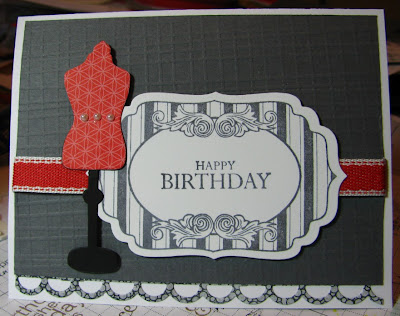 *Note: This is LARGELY INFLUENCED by the card used in the above post. I also admit that post is what made me order the dress form die from PTI.
**Note2: It is now obvious to me I know not what a dress form looks like in real life, since I failed to trim the top of the poppy DSP to reveal the top of the post. Or maybe I was just not thinking clearly. Yeah, that's it.
***Note3: I straightened the ribbon after I took the photo. I DID!

The stamped image is from the Lovely Labels GinaK set (Nestie-friendly!) stamped in Basic Grey on white and cut with a Nestie Labels 4. The sentiment is from another GinaK set: Labeled with Love. The scallop at the bottom is one of my new MFT dies from my shopping trip today. My LSS has a wall of MFT in the house - stamps & dies. It was so, so cruel. Several of us were muttering under our breaths. I've decided that the Fondle Factor is a real influence. Things I've not added to my online cart were touched and added to my basket in the store. Sigh. I did NOT, however, get the tree die, even though I did touch it. Twice.

In this next version of that card, there is only one minor difference: 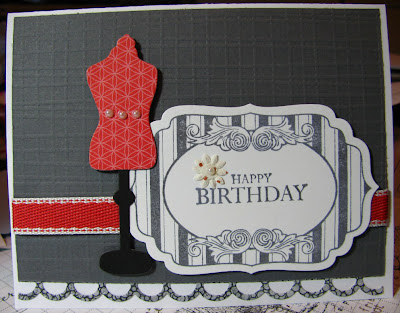 The cute flower with a pearl in the center hides an unfortunate ink schmear. Lesson #1 in stamping: There are no mistakes in stamping; only opportunities for embellishment. I rest my case.

Next up, I started to do a sketch, but then I realized I didn't have enough layers, and also this is my own, personal go-to layout for just about anything. So it's not a sketch. But it IS a birthday card and it does use new stuff: 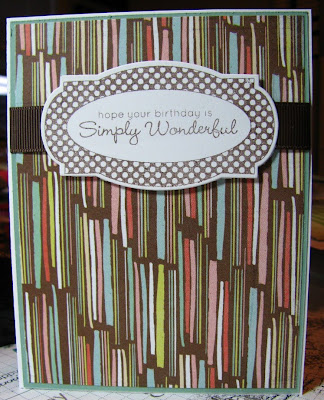 The patterned paper is from my new pack of Basic Grey Hopscotch. LOVE IT! This is for a 20-something young man, so I chose this one from the pack - kinda looks like books at first glance.

The sentiment and frame are another MFT purchase from today. The stamp set came with the die - TOO EASY! NOT FAIR! WE ARE WEAK! At first I was afraid I couldn't cut the card stock first, then line up the stamp, but it was crazy-easy. I used Dotto (temporary adhesive) to hold the die-cut card stock in place, inked up the stamps (I put them both on the block together and inked & stamped once), and since they are clear, it was easy to line it up. I love these things! Looooove!

I snuck in some ribbon and a layer of Sage Shadow card stock that was sitting next to the paper cutter. I think it came out quite manly, don't you agree? :)

And last(ly), since the stamps were already out, and since I had a piece of this paper still out and two extra Basic Gray layers sitting next to it, I made two of these: 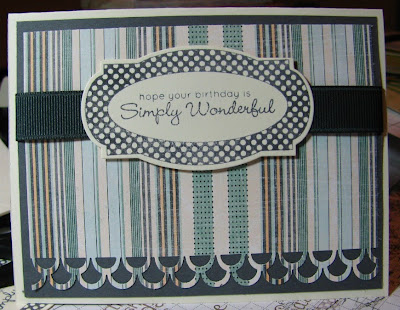 Again, too easy. And again, I had an opportunity to embellish one of them: 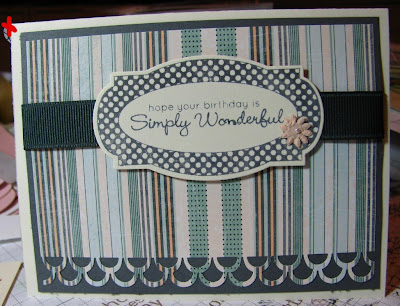 An unfortunate schmear. Love the little baby Primas I finally opened and used. (yay, me)

(That red 'x' is supposed to inform you that little scrap of whatever is not part of this card. There is just a lot of sticky stuff all over my 6x6 work space, and it stuck. It happens. It will not be sold with the card.)

So that's it for today - I'm all stamped out. But I have lots of new paper packs and new stamps to play with (with which to play), plus I have nothing even started for my February Stamp Camps, so there should be more crafty stuff to share with you this week.

Thanks for stopping by!
Posted by Leslie Hanna at 6:42 PM