Sometimes people ask me where I get my ideas for cards. I tell them I do a lot of blurfing (blog reading) for inspiration; sometimes I read magazines; sometimes it's something in my environment - a coffee mug, a shirt, a sign; and sometimes it's what Noel Paul Stookey once said on a live recording of his I have (on vinyl): it's "off the wall. By that I mean, you don't know where it came from". This was one of those cards: 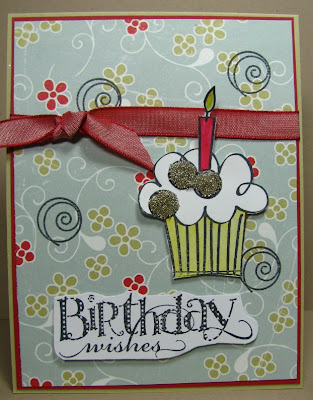 This started with a left-over puddle of Crystal Effects I had on a scrap of paper. I had just used it to secure the micro beads on this card with a top coat of the stuff, as they were not sticking too well to their original liquid glue, and needed attention. I'd set that aside to dry, and was faced with the remaining puddle.

Puddle = might as well use those blasted micro beads again, and this time I would win. Then I remembered a cool cupcake set Miss Lauren had gifted to me earlier this year, and it's got circles on the icing, which screamed for beads.

So the first thing I did was stamp the cupcakes on white and fill the circles with Crystal Effects. Then I had to face The Beads. This time I took an empty SU clam shell box and poured the beads over the adhesive and the excess fell into the clam shell box (instead of rolling off the desk and onto the carpet). I am so smart sometimes. After I got all the gluey stuff covered in beads, I used a toothpick and took the remaining glue from the puddle and covered the tops to seal them.

Yes, it was a lot of work, but I didn't waste all that glue! After they were done drying, they looked like this: 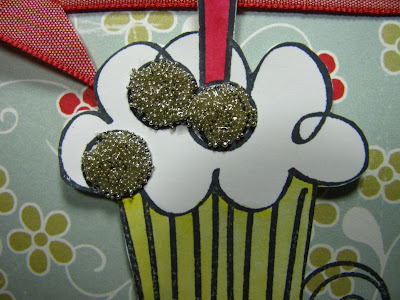 Not bad! Though I must admit, long-drying adhesives are not the best choice for those into instant gratification. While it dried, I went across the street and got take-out dinner. Then I brought my dinner home and ate it. Then I tweeted and read some blogs. Seriously.

Oh, and the beads still flaked off. Look: 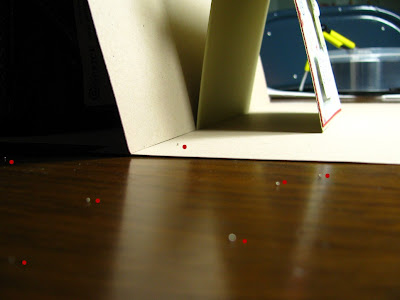 Each handsome red dot = an identifiable rogue micro bead on my dining room table, next to my ghetto photo studio. I will never find them all.

So let's summarize:
1. I made a card based on having some left-over liquid adhesive.
2. I used a stamp that had never seen ink.
3. The papers used were all scra remnants.
4. Crystal Effects takes forever to dry, but not as long as Stickles.
5. Please notice I went above and beyond and also stamped the circle from the stamp set onto the background paper.
6. HOW did it get to be 11:00 PM? !?!?!?! I need a keeper.

Thanks for stopping by!
Posted by Leslie Hanna at 10:07 PM