*** Giveaway is closed. Yeah, I know it says Friday, 11/14, instead of 10/14, but 11/14 isn't a Friday, and I wouldn't give you guys a whole month to respond, anyway. I'd forget all about it; I can't even remember what I had for breakfast and you want me to remember something for a whole month? Not. Sorry for any confusion. ***

As promised, here's a peek at my "before" and "after" efforts in The Captain's Quarters. First, the "before" pic of the side table: 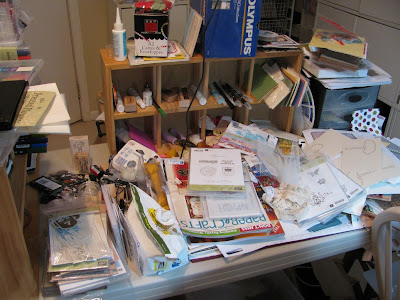 Yeah, it was pretty much a dumping ground for things that slid off my standing desk, or that otherwise had no home yet. Those wooden boxes on the left and back of the table are some old CD storage boxes I have. They are perfect little spaces for inks and acrylic blocks. Unfortunately, I can't get to most of it because of all that other stuff. Plus, this table was fine before I got the standing desk, but I had to turn it sideways for the new desk to fit in the room, and in this direction the table was just too wide. Something had to be done. And I done did it!

Here is that space now: 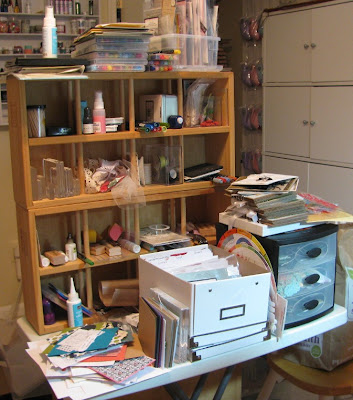 I replaced the table with a much smaller one. I stacked the wooden boxes on the back, then put my small drawer unit (ribbon scraps, UFOs, etc) on the right front of the table. 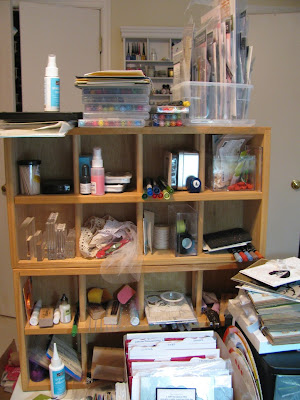 On the top - now only one surface instead of two ... when space is at a premium, one must build UP - from left to right: my stamp cleaner, SU markers, and a box of my MFT and other dies that have no home. Some of them are so small I have no idea what I'll do, so there they live.

The cubby-holes of the boxes hold my most-often-used items: Memento inks, acrylic blocks, my SU mat pack that I was forever losing somewhere on my desk, you know - stuff.

The front of the table top: 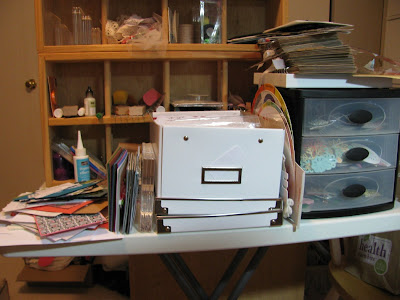 That white box is from IKEA, and now holds all my Nestabilities and my border dies from several other companies. It may not be the best solution, but at least I'm going in the right direction. To the left of that box are some cards I re-discovered under the heap-o-stuff on the desk, and what's left of my "in progress" pile. I guess they could be called UFOs, but if I could just focus for a bit, I could complete all the partial cards in there. Believe me when I tell you my "in progress" pile was 4 times this size. I'm talking major purging here at the Crooked Household. Funny how something you had to save is no longer deemed necessary a month later.

Here's a peek inside the Nestabilities storage: 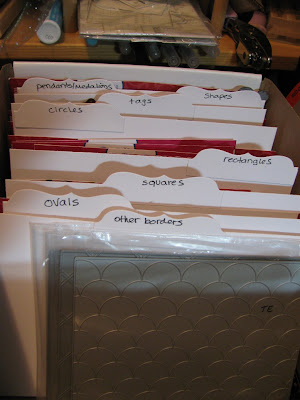 This used to be stored in a 3-ring binder, but then I had to have somewhere to put the binder, open, and that was always on top of something else. This way I can flip through them in the box and not have to move anything. Also, I realized I found myself looking for "something rectangle" or "something oval-ish" so that's how I decided to store them in here. Each set is on a 4x6 magnet sheet and (once I thought to do it) with the front of the packaging so I know which set it is.

Right now this box is too heavy to lift, so I probably need to upgrade to something sturdier. This box came in a set of 2, so the second one is unassembled and stuck under its sibling - no where else for it to live. :(

Lookie what I found along my travels in the "in progress" pile: 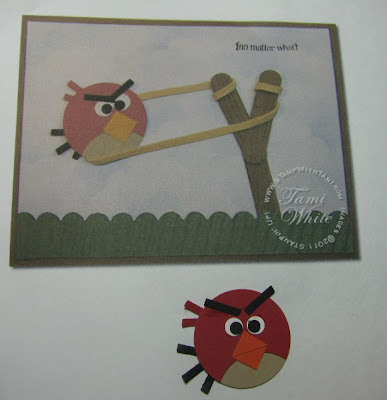 I made an angry bird! HAHAHA! And I don't even play, but I did watch a video so I could see what the sling shot was all about. It's made from punches, and is fun to do. I thought I might make some cards for Angry Birds fans, but you see how far I've gone with that idea. This is it, folks. Yeah, it's on the list.

As I've said for the past few days, I've been doing some major pruning and purging in the Captain's Quarters, and you will be the recipient of my "OMG, WHY do I have SO MUCH of this" efforts.

Okay, ready for a give-away? Today I have five (5) packages of SU Delicate Dots DSP that were part of SAB a few years ago. I've cut them down to 6x6 so they'll be easier to mail. Here's what they look like: 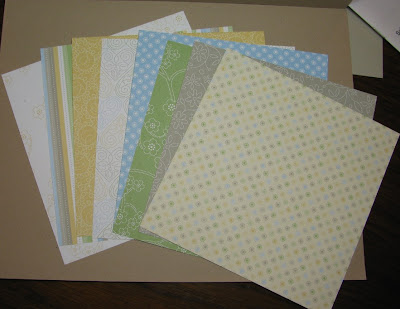 (Please click on the photo for a better look at the patterns.) I have displayed both sides of the four double-sided papers.

I have 5 packages, and each winner will get a whole package. How can you win? Just leave me a comment on this post by Friday, 11/14, at 6 pm Eastern Time US and answer the following question:

How many grooves are there on a record album? (You know, those vinyl things? Yeah, those.)

I'll pick 5 winners through a totally unscientific and probably not fair method, and announce the winners Saturday morning.

Good luck, and thanks for stopping by!
Posted by Leslie Hanna at 3:21 PM