A little old, a little new. My retail therapy today resulted in the purchase of a 30% off MS punch, so I used it to make two cards, thus getting rid of two card bases off the desk. I had ear-marked the bases for some more of these, but I realized I stamped the ladies on vanilla and these bases really need white. Oh, well, so I changed things up a bit.

Both of these cards are the same except for the sentiments*. Here's the first one: 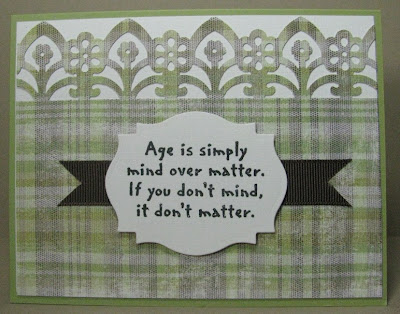 I realized I am waaaaay behind in the irreverent sentiment section of my inventory, so I need to get to work on those. I've been focusing on normal cards, and well, it's the weird ones that pull people into my booth at these shows. Must. make. more.

In addition to the new-to-me MS border punch, I also picked up this set of Nestabilities. Then, breaking with tradition - where I stamp a sentiment then spend 15 minutes trying to pick just the right die for it, I took the die to my Irreverent Sentiments area and found two that would fit in this die. Poifect!

Here's the other card, exactly the same except for the sentiment. And I got the punched part more centered on this one: 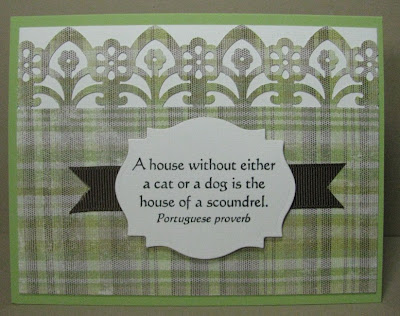 Can't you just see Mark Twain saying that? heh heh And I don't think I've ever inked up this one. Shameful.

Okay, next up I'll have those remaining butterflies attached to some cards. I'm determined to clear off some space! DETERMINED! :)