Today was a GLORious day at the Market. My, my, my, my. It was cool, the sky was blue, humidity was looooow, a nice breeze, and (the best yet) a constant, steady stream of people came through. And they were BUYING! It's what we call "hoppin'". Check it out: 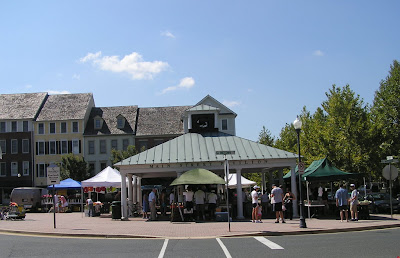 People, big and small, strollers, dogs, bikes - it was wonderful! And people are in such good moods when it is this nice out, too. Although I must say most people who stop by are generally in good moods; I think it's a market thing. Have you ever noticed how people who frequent markets like this bring their own bags? Yeah, we do a lot of behavioral studies and people-watching. It can be very entertaining.

I got set up before 9:00 am, so I visited the Dahlia Guy and got my pick of fleurs. First I took a few photos in the glorious light: 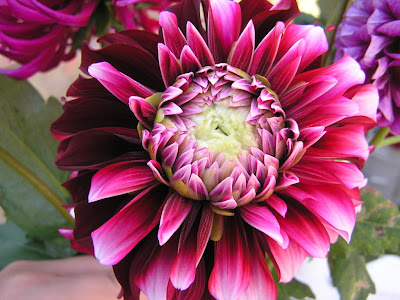 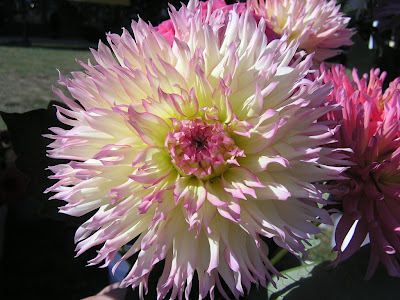 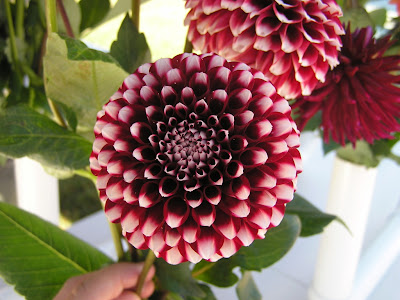 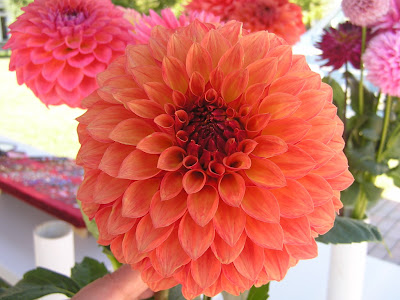 I grabbed four of his larger blooms for my vase this time. I tried to take individual shots of them, but they came out awful, so here is the whole vase: 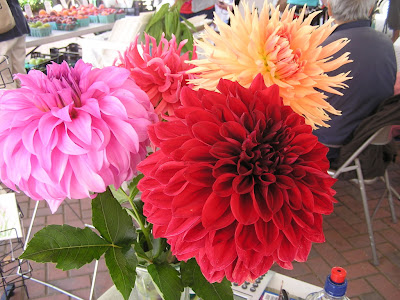 This was not a zoom. Each of these babies is over 9" across, I kid you not. I had so many people stop dead in their tracks and drop their jaws, that I started saying, "Yes, they are real. No, they do not smell. Yes, you can buy your own right over there." and I pointed to the Dahlia tent. Later in the day, the Dahlia Guy's wife (man, I wish I could remember her name ...) mentioned that people were whining that I'd bought all the good ones. Get here before 1:00, people!!! ;-) The photographer who sits beside me kept prompting me to sell mine for $5 a bloom and make a profit, which I, of course, refused to do. People would stop and stare, and I'd hear this whispering behind me: "Five dollars ... tell them five dollars..." It was pretty funny!

Also, among the many pooches visiting us today were these two beauties: 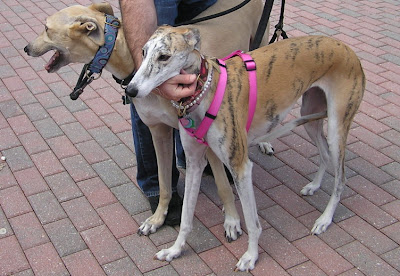 Both are Greyhound rescues, though the one in front is of the Spanish variety (yes, from Spain.) Not only are these the sweetest dogs known to mankind, what struck me about the female was her string of pearls. The guy said she is a real Mama's Girl. ;-) 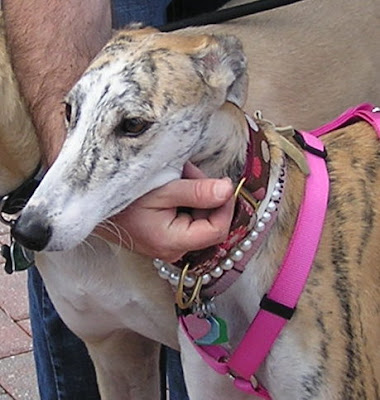 I had another great sales day (woo-hoo!), and tomorrow is supposed to be as nice as today, so I hope to do well tomorrow, too. I have donated two packs of my City Cards to the Market as give-aways, so hopefully it will be good advertising. Also, the guy from the City is supposed to stop by and get two more card packs. I look forward to the hustle and bustle and the BBQ sandwich for lunch and the Italian Ice, too! I'll report back on how it all goes.

And don't forget about my Great Scrap G-I-V-E-A-W-A-Y! Help me clear off that shelf so I can get something else organized and put away!