Today could not have been more glorious! The sky was blue, the sun was out, the humidity was low, a breeze was blowing, and the people were shopping! I had a great sales day, and the BBQ truck was there so I could get my fix. He even remembered me and knew I wanted no bun. ;-)

My Sunday market always has music, and part of the time it is a live person or band. Today's group was Crash, The Band, and they are a group of local kids. At first I thought it was some Karaoke thing, but when I wandered up to check it out, this is what I found: 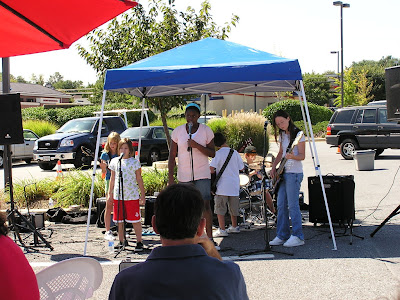 We're talking kids - little kids! Elementary and Middle School are 'little' to me. And they were rocking on those instruments! That guitar on the left was as tall as the girl (in the blue shirt) playing it. And someone told me the kid on the drums (you can barely see his head over the cymbals) has only been playing for a year. They were playing songs from the 60s and 70s, and they were GOOD! Hey - I thought it was karaoke, meaning pre-recorded music. I threw some money into their collection till.

(Yes, their parents were there. No, I did not get a release to post this photo on my blog. Yes, if you are the parent(s) of one of these kids, I will cease and desist. That is, if I cannot get your permission after the fact. May I beg? Would begging work? How about money? Free cards? How about giving me a link to post and I'll help you get a gig? BTW, your kids are MARvelous!)

I sold a bunch of three-fers - three cards for a discounted price, which has turned out to be one of the smartest offerings I've ever had. There is something about a "Three For" price that makes people want that third card. I try to talk them out of it; I even tell them they would only save 50 cents on the third card, but they still insist, so my sales were goooood. I highly recommend this marketing technique to anyone selling cards. Or anything, really.

The gentleman from the city stopped by to pick up his two packs of City cards, so I am almost out of them again...just one pack left. Several other people asked for other cites (towns) that I do not have, to the point where I started asking which city am I missing now? And they'd tell me! One woman said she would definitely buy some if I made them for her, so I'll include hers in my next wave of these cards. I am okay making on-demand cards like this if I think of it as my one store offering, but person-to-person, and without the shipping hassle.

When I got home, I finished up these cards I'd started the other evening: 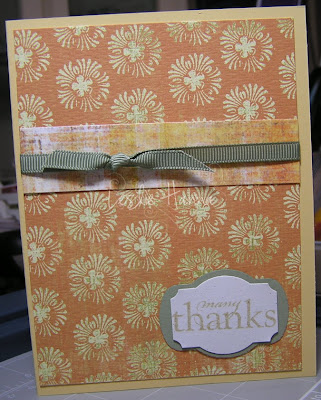 (Man, I even take crooked photos!) I had some of this paper left out in my scrap pile, so I used it. All gone. Well, except for the pieces of the same paper I had to buy yesterday at Angela's. Shhh, done tell anyone.

Then I decided to use some of the new stuff I had to buy, and here is my first attempt: 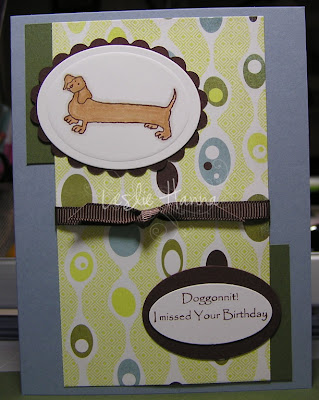 The dog, sentiment, patterned paper, wide oval punch, and markers used to color the dog are all new. The Wide Oval punch is from Stampin' Up!, and as you can see it layers very nicely with the SU Large Oval punch. Of course it does.

The paper is from my new Basic Grey pack of Offbeat 6x6 papers. The dog and sentiment are by Rosie's Roadshow. I used my new Copic Ciao markers to color the dog - E31, E33 and E35 for the dog and W7 for the shadow around the dog. The sentiment is stamped in Choc Chip. And I used my Nesties for the ovals for, and under, the dog.

Phew - that's alotta stuff for just one card! I made four of these and put them in my "for next week" box.

My goal for tomorrow is to make up three more projects for next weekend's workshops and also to inventory all my retired sets that I plan to sell. My customers get first dibs on buying them before I post them online (here and at SCS), and given that my customers will be over next weekend for the workshops, tomorrow is my day to do it all. Evenings after work cannot be trusted, or I will be doing my "up till midnight" on Saturday to get ready, and I so don't want to go there again. Wish me luck! I'll need it, as we all know that I am very easily distracted...