Not Your Typical Market Day

Today's market was pretty interesting. Not all good interesting, but interesting all the same. We started out with early arrival (before 7:30 am) due to the scheduled 5K race and associated street closures. The first thing I saw were orange cones closing the street I usually take, so I had to do the round-about to even get there. grumble ...

One of the rules about our market is: Farmers are first-class citizens, and the crafters are second. The farmers have assigned spaces and they get as much room as they want. We lowly crafters have to divide up what's left, or set up tents on the lawn. We are all okay with this, and it works really well.

Today when I arrived there was a band setting up next to our little pavilion. This was bad. Not the band being there, but the fact that they had taken up the whole sidewalk, including the space assigned to one of the farmers. This was the bad thing. As soon as I unloaded my car and started to set up, I went over to one of the band members and informed him they would need to move over to make room for the farmer. The guy got pi$$y with me! First come, first served. He should have been here early if he wanted a spot. Uh, noooo, I think you are mistaken... After much pi$$ing and moaning, I finally got them to move over about 10 feet. Then I was saved when one of the event organizers told them they really did need to move. I returned to my set-up and two of the farmers said the band members had not believed them, either. Hmph.

Now mind you, it is still before 8 am. Next thing we know, the band starts playing, and they were LOUD. I MEAN LOUD, as in YOU CANNOT HEAR YOURSELF THINK loud. At 8 am. And there is a retirement home right across the street. Farmer Mike, who was set up the furthest from the band, had trouble conversing with customers. One of the crafters is very pregnant, and she was standing on the far side of the market, actually out in the street, with her hands over her ears. She said the noise was disturbing the baby. We all had headaches after about 10 minutes, and they played for TWO HOURS. Farmer Mike finally called our market organizer and left her a voice message, which we are pretty sure she could not hear. So the first two hours were a living nightmare.

When the farmer arrived to try and claim his spot, we just sat there and waited for the fireworks - he is not shy. Fortunately for the band, they quit playing at 10. This was REALLY fortunate for us. So the day started off really badly.

But there were some really funny moments, too. While two of us were hanging out at Farmer Mike's to be far away from the noise, there was a guy checking out the watermelons, so we struck up a conversation with him. We tend to do that a lot...we are a friendly bunch. So anyway, he was trying to pick the best melon, and we had some suggestions for him. He stopped, laughed, looked at us and said, "You are talkin' to a black man from Alabama. I think I know how to pick a melon. And a 'mater. Not much else, but I can sure pick a melon." OMG, we laughed so hard, and he was laughing the loudest! I finally stopped laughing enough to tell him I was glad he'd said that. Then he just lost it - laughed so hard he had to put down the melon. Farmer Mike just looked at us and shook his head. It was pretty funny! The guy did buy two watermelons, by the way.

Time for some market photos... Farmer Mike has brought some of these flowers for several weeks now: 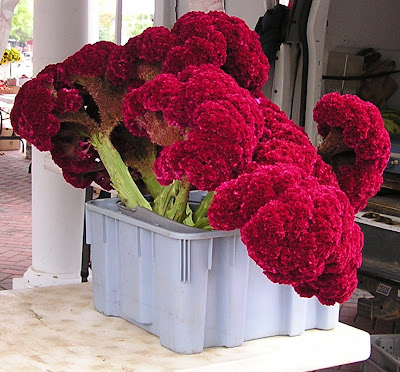 This is called Cockscomb, and it is beautiful. He sold it all by the end of the day, too. You can keep it like this by putting it in water, or you can let it dry and use it for dried flowers. You can also keep the seeds to grow your own next year. I know all this because I had to have him explain it to me several weeks ago. Once he'd finished, I told him that was nice, but if I were to plant the seeds next year, did they need sun to grow. He just shook his head and walked away. Farmer Mike shakes his head at me a lot.

I always check out the veggies du jour, and today gave us these: 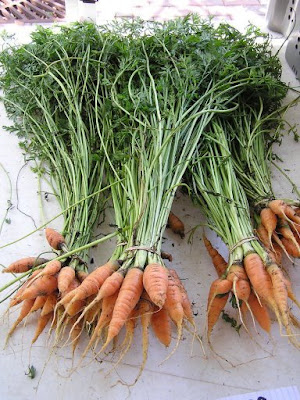 These are what could be called stunted carrots. They have been growing since February. They have had their greens cut off for, um, greens, and when that happens, they expend all their energy re-growing the greens, so the actual root veggie is out of luck. They finally picked these, and the Rock Lady bought some for her guinea pig, or was it a gerbil? 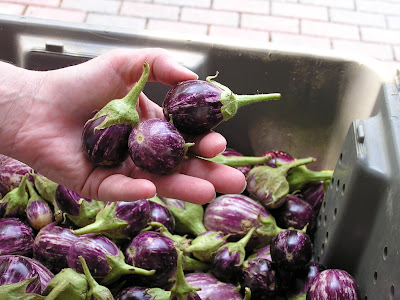 I had the Rock Lady hold a few so you could see the actual size. They taste the same as full-sized eggplant, but aren't they cute? I am pretty sure Farmer Mike was shaking his head at me here, too.

The rest of the market was okay. I had a few sales, so it was not a Zero Day, thank goodness. And the Fruity Pebbles Rice Krispie Treats were a hit. ;-)

After the market, I headed down to Virginia to Angela's Happy Stamper to pick up my ordered goods. I fully expected to see more stuff I had to have, and without fail, I succumbed to the lure of the merchandise. One of the things I picked up were some more A Muse note cards (yes, I needed more, okay?!) to make some "neutral" baby cards. Someone liked the ones I made in blue and pink, but I had no yellow or green for those times when they did not know the gender of the yet-unborn little one. Funny, but I had some baby stamps in my order, too. Whazzup with that? I need to refocus or something. So when I got home, I broke open the pack of green & white card stock and made this: 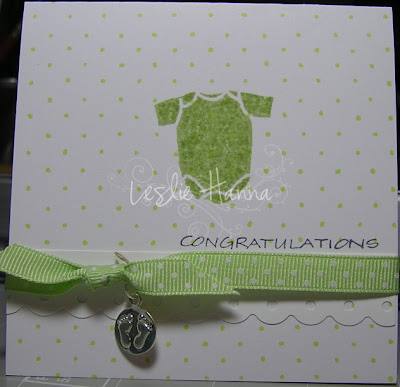 One other funny thing that happened was I sold one of my new 'feminine' milestone birthday cards. That all by itself was not funny, but the actual sales process was. A gentleman picked out one of the cards, slipped it to me upside-down and said "shhhhhh!". I slipped it into a bag lickety-split, he handed me some cash, said we were even, and went back to meet up with his wife. Wasn't that the cutest thing?!?!?! A similar thing happened last weekend at my Sunday market, where the guy picked out the card and had me sneak it into a bag all when his wife was not looking. I love this stuff!!!!

And my last funny thing today was when the Rock Lady asked if I had a card she could give to a new neighbor who did not walk her dog, but let the dog out a 5 am and let it bark and wake up the neighbors. So did I have a card for that? Um, let me work on it, okay?

So I guess the funny stuff almost made up for our earlier misery. Oh, and our market organizer did stop by and apologize for the noise. Seems she had no idea there would be a band, and certainly not a LOUD one, and CERTAINLY not at 8:00 am. My ears are still ringing.

I need to go get some shut-eye so I can be vertical for tomorrow's market. It is supposed to be a nice day, so afterwards I will probably have the strength to stamp something, maybe even something blog-worthy so I can share it with you. ;-)