Since most of you are normal (that is: not like me) and make one or two cards at a time, I thought I'd show you what an assembly line of card-making looks like.

I generally make only two or three of any card I think up. But when you get as low as I am with my Birthday Card inventory, and when I get a hair-brained idea to make Decade cards (I have done this in the past, so this is not the first time this has happened...just a different design), the whole thing becomes an all-consuming event. Luckily for me, the Analyst part of my brain surfaces and organizes the creative side, which is where the whole assembly line thing comes in to play. It is the only way I can do this without my head exploding, and heaven knows it is already enough of a mess in here without that happening.

So here we go. First, I stamped the better part of two sheets of Whisper White card stock with the Big Deal numbers in Elegant Eggplant Craft ink. I did six of each number, except I did more 5's and a lot more 0's. After each six stamped numbers I'd apply clear EP. After all the numbers were stamped, I heat-embossed both sheets, then cut apart all the numbers and tossed them into little piles. 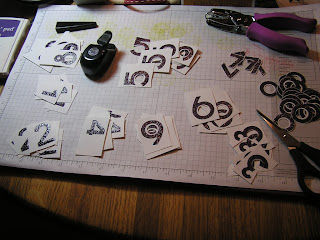 Here's the little piles o'numbers. When I made my mock-up the other night, I'd discovered the zero was easily punched with the 1/2" circle in the middle and the 1" circle on the outside. Too easy! I was inspired by this success, and suffering from extreme fatigue due to major sleep-deprivation because the Olympics have been on all week and I've been staying up past my bed time, I looked for ways to not have to cut out all these numbers tonight. Desperation: The Mother of Invention. I figured out I could punch out most of these with the various SU circle punches, leaving very little cutting! Yay! 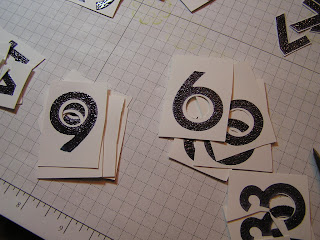 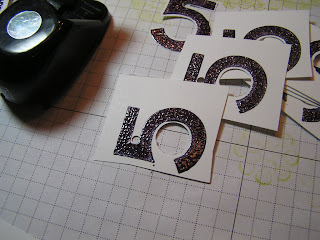 For the 5's I got even more creative...using the 1/2" punch for the bottom part and the 1/8" punch for the top. This totally eliminated any tight corners to cut, as I just had to cut up to the punched-out part, making these a breeze to trim. 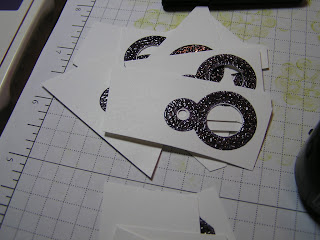 I went back later and used the 1/2" circle punch on the 2's (no picture), but afterwards I decided it was a little too big. They're passable, but maybe next time I'll just bite that bullet and trim the 2's by hand.

The only real trimming I had to do with an Exacto knife was with the middle of the 4's.

Once I finished the numbers, I cut the Mustard dotted papers with a scallop Nestie square die, stuck them on to scraps of Whisper White and cut them all out real close.

Then I stuck the punched green squares on to Perfect Plum and cut them all out, followed by cutting some More Mustard DS paper into 5 1/4" x 4" pieces. Lastly, in the cutting phase, anyway, I cut the Whisper White bases and scored them on the Scor-Pal.

Here we have all the parts-is-parts for twelve cards: 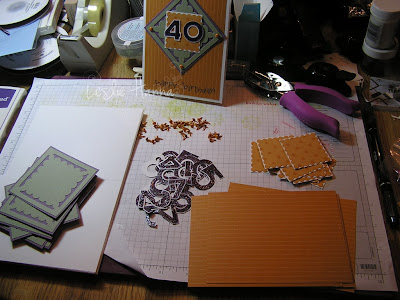 I started by attaching the Mustard-on-white scallop squares to the green & purple layers. Then I marked and punched all the corners and put in all the brads: 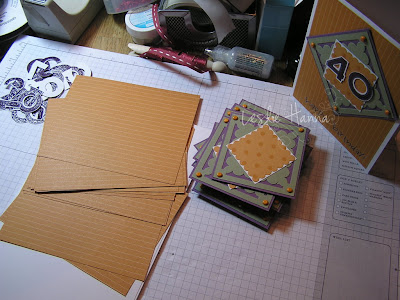 Next I attached the Mustard DS paper to the front of each Whisper White card base, but I did not fold the cards until I was all done. I've found it much easier to stamp the sentiment when the card is not popping up to meet the stamp (!), and it's also easier to stamp my copyright stamp and my Web site stamp on the back.

Next, I stuck the purple & green layers onto all the card bases, and then I stamped the sentiment on the fronts and copyright on the backs of all of them using Elegant Eggplant Classic Ink. The last thing I did was stick on the numbers. I put numbers on nine of the twelve cards, leaving three of them nekked for customizing. Then I folded them on my pre-scored lines (love that Scor-Pal!)

And here we have all the little soldiers: 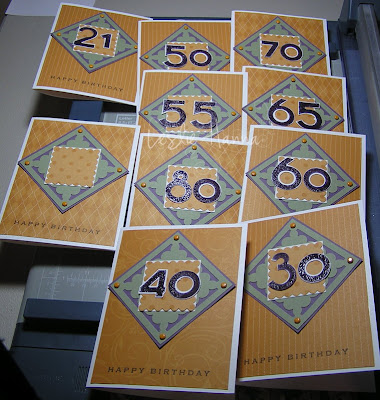 You can see I chose to go totally crazy-wild and I turned over a few of the double-sided Mustard DS paper pieces so I had a variety of patterns for the backgrounds. And one lucky 40-year-old will get one with swirls.

I put all these guys with envelopes into clear sleeves, stuck on an inventory number, and called it a night.

That's it! That's how I do the whole assembly-line thing when I decide to make a lot of one card. Except for these Decade Birthday cards, or my Holiday cards, though, it rarely gets this intense. Hey, my whacko brain has too short of an attention span to do this sort of thing more than once or twice a year, which is why I opted to chronicle it while it was happening.

Well, it is many hours past my bed time, but the Olympics are on, and I love the Diving and the Track & Field, so I am doomed to be sleep-deprived for another day or so. Hopefully my markets will go well this weekend, or I'll be sleeping in my soup! I'll report back later this weekend on how things go. Thanks for stopping by!