Today started out very blech. And if 'blech' is not a word, it should be. It was overcast and starting to spit, and by the time I got to the market, it was raining. Since I get there so "late" (according to the farmers who get there by 7:30 am), Farmer Mike had to show me how he'd sufferred by dumping all the water from his tent top. It was pertty funny, and it got my heart started.

So when I got there, I was only the second vendor - lotsa room to set up today! But by the time 10:00 rolled around, everyone had decided the rain ws going to go away, and they showed up anyway. Eventually the rain did stop, and the market was hoppin', but by that time the damage had been done, and sales were slow for most of us. We still had a good time, though!

I spent all last night cookin' up a storm because I knew I'd have a ton of new veggies and fruits in my CSA, and sure enough, I got that ton, plus a whole watermelon. My fridge has vats of the following from my cooking spree: ratatouille, cole slaw, and cucumber & onion salad. Since I have nothing else in the house to eat, in theory I should be eating good for a few days. Oh, except for the bag of tortilla chips I bought to eat the salsa I made two days ago. And the left-over donut holes I got for breakfast...

So today I thought I'd share more about Dahlias and our market's resident Dahlia Guy. Here is his very inventive set-up: 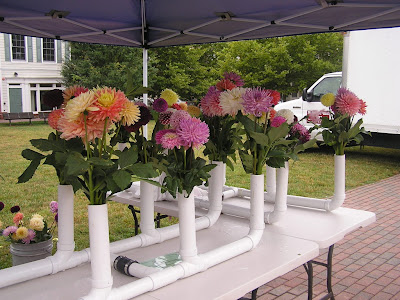 Is this not the most clever thing you have ever seen? He constructed it from PVC pipe. Once he assembles it, he fills it with water and just sticks in the bunches of flowers. At the end of the market (or when he sells out), all he does is dump out the water, disassemble it, and stow the parts in his van. I love some people's ingenuity!

Here are two of his flowers I took photos of today in the real light of the outdoors: 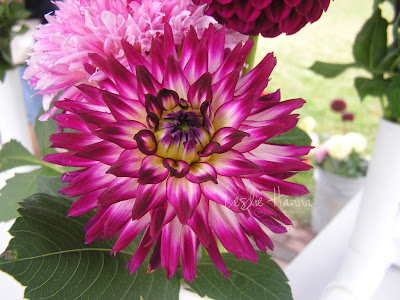 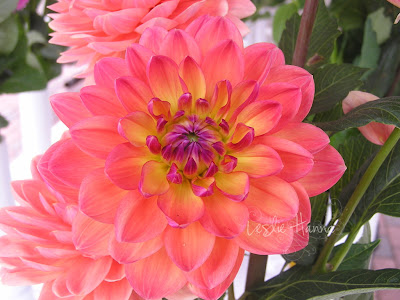 Aren't they gorgeous!? I got two vases full this week, and one of them (the flower, not the vase) is as big as my head. Almost. I'll try to get a decent outdoor shot of one of them next week.

The rest of today and all of Sunday I plan to work on projects for next weekend's workshops. Yes, once again, I am down to the wire. I have one done, and three to go. I am sure along the way I'll play with the scraps and non-SU stamps. I'll post anything worthy.

And don't forget to try out the subscription thingy I posted earlier today. You can always unsubscribe later...I just need to know how the darn thing works (or doesn't!) Thanks!