Alotta Veggies, and Part of a Wedding Card

One thing I will say for this CSA gig: I get to figure out creative ways to use all these dang veggies I get every week! Tonight, I had A Plan. I was going to make two dishes that both needed me to drag out the Food Processor. If I am going to retrieve and assemble all the parts-is-parts for that thing, I am going to use it more than once!

I was desperate. I was in what can be referred to as a Fatal Embrace. Or maybe a Perfect Storm. My place is small, and I have a lot of stuff. In the kitchen, I had emptied out the CSA cooler and had everything in the sink. I'd also made some more Rice Krispie treats in an attempt to use up the extra cereal and marshmallows, and had those 9x13 pans stacked on top of my stove. I also had the pan I'd used to make the treats, also on the stove, for lack of a better place to put it. And I had the counter stacked with LAST week's veggies.

I could not wash the pots and pans until I'd emptied the sink. But I needed to cut up the veggies in the sink in order to cook them. But the pots and other veggies took up all available counter and stove-top space. Ack!

The Plan: Chop up as many veggies as I could and get them in the oven to roast. To accomplish this, I balanced the 9x13 pans on the edge of the sink, and I put my teeny tiny chopping board I use in my teeny tiny kitchen onto the stove top and started chopping. I just laugh at all those Food Network people who expound on the virtues of a large cutting board. Well what if that darn thing WILL NOT FIT ON MY COUNTER!? Huh? What about THAT! Ahem. The plan for these veggies was from something I saw on Alton Brown's show the other day. He roasted a bunch of veggies, let them cool, then threw them into a food processor with a brick of cream cheese. Can you say - Veggie Cream Cheese?

So, the veggies went into the oven. Done. The second wave was to chop up the veggies remaining on the counter to make another version of the tomatillo salsa - the no-cooking version. This is where things went a little wrong. After chopping, I had enough room on the counter to set up the food processor, and I started to throw everything in: tomatillos, sweet peppers, green peppers, jalapeno peppers (2), zucchini, cucumbers, etc. I filled it about 1/4 full and fired it up. I proceeded to add the rest of the veggies in stages until the processor was just about full. I threw in some cilantro and the juice of one lime and finished blending. It smelled yummy, but it was a little runny. Okay, a lot runny. More like a soup. When I removed the processor bowl from the base, there was liquid running everywhere. Soup. I had a brainstorm to throw in a brick of cream cheese as a thickener and to and make THAT into a spread, too. My mistake was not draining the 'soup' first. Okay, so I drained it in a strainer afterwards, and it is actually very good. I put that stuff in the fridge and moved on to the roasted veggies that had cooled.

This was too easy - dump the roasted veggies into the bowl of the processor, add a brick of cream cheese (softened), and fire it up. In a few seconds you have a roasted veggie spread that is very, very good.

I can now find my sink, but I have a ton of dishes to wash, including the food processor. A woman's work is never done.

To celebrate the veggie project completion, I started to make my Nephew's wedding card. I had this idea to use my Verve butterflies and also use my Pretties as embellishments. I asked my Brother what the kids' colors are, and he said Teal, or maybe Cream. As of this moment. The wedding is the 13th, so I sure hope they figure it out quick! They are getting a cream & teal card, and so far I have this: 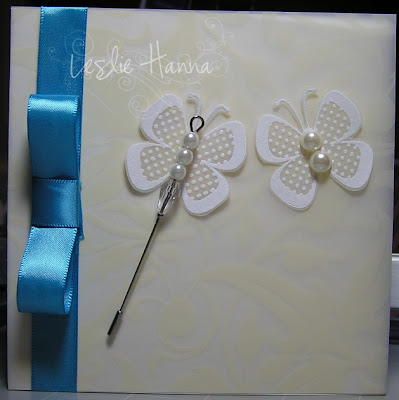 I have a Wedding Wishes stamp somewhere, but is has gone missing. When I drag out my retired sets this weekend I'll look through them, but I am pretty sure it was a clear stamp, and it is in The Other Room somewhere. Goodness, just shoot me now.

Okay, time for bed. I have my massaaaage after work tomorrow. Yay! I hope to find more time to stamp something, too. Thanks for stopping by!
Posted by Leslie Hanna at 8:59 PM