I left Port Huron bright and early this morning, and surprise! It was not raining. Okay, it was not raining when I left the hotel, but it was raining by the time I met up with #1 son. I did have to get my sunglasses out once, but I put them away again.

After a hearty breakfast, I left to head West to Indiana to meet up with #2 son. Most of Michigan and Indiana looked like this: 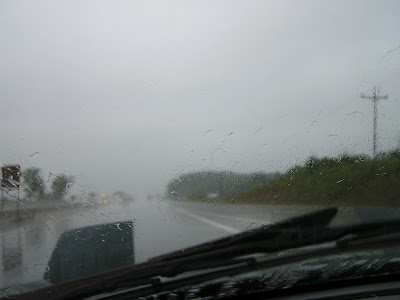 I set the camera on top of the steering wheel and snapped it between wiper swipes, so you see what I saw: a lot of wet. Actually, it was getting quite windy, too, which is easy to tell in a Miata, because keeping the car going straight can be a challenge with strong gusts of wind. Turns out (I found out later) that I ran into the tail end of Ike. Apparently he took a right turn once he made landfall and just headed up to hit the Midwest, which is where I was. Darn! The closer I got to my destination, the wetter it got, including standing water that closed several exits off of I-94, and also major flooding in the town to which I was headed. It was so flooded that my son met me at the hotel, because he was sure I would not make it to his place. As it was, the road just past my turn-off to the hotel was totally flooded. Ugh. But by the time we went to dinner, it had mostly drained away.

I see Ike is now in Canada, but we are in for some more rain tomorrow. Oh, joy. I get to drive through 4 states in the rain. But I am getting real good at it.

The shopping center behind where we went to dinner has a Hobby Lobby, and I have never been to one of those. Hopefully I will get out of here before they open and not be tempted. ;-) Actually, I think I'll do my damage online, instead, as PTI has their release tonight at midnight, which means I'll hit them later this week (probably Tuesday - my day of recovery). They have a new "Jewish" set that promises to be exactly what I am looking for. Now I'll be able to tell all my Farmers Market customers who ask: "Why, yes, I do have Bat Mitzvah cards."

Oh, and because someone asked via a comment, Farmers Markets generally run May-October in our neck of the woods, but both of mine run into November this year. In particular, my Saturday market in the Kentlands goes through the Saturday before Thanksgiving, and my Sunday market in Olney goes until November 9th, I think. So if you are looking for farm-fresh veggies, you should be good until the second or third weekend in November. Make sure to ask one of the farmers when you stop by to confirm the end date.

Tomorrow I head for home. Part of me wants to take the back roads, because the turnpike is so incredibly boring, but with the rain, back roads can be dicey, so I'll undoubtedly opt for "faster" over "interesting". I'll wait for a sunnier day to do the "interesting" version.

Thanks for stopping by!
Posted by Leslie Hanna at 10:18 PM