I am the Master of Creative Avoidance. I was supposed to spend the rest of today cleaning and setting up for my workshops tomorrow. But noooooooo. Okay, I did cut all the card stock for the kits and collate them, so that is done. I even have one of the stations set up, and a bunch of stray stamps and ribbon and punches put away. But then, well, let's just say I think I am officially channeling June. I kept looking at all the stuff I've started and set aside, or pieces of paper that could be used so as to avoid the Clean Sweep, and I just lost track of time. But oh, what I've accomplished!! Let me show you!

I had a pile of cut-and-scored white card stock that I was going to use to make Thank You notes, and I did not want to put them in the scrap pile. I also had a bunch of flower images I'd mistakenly stamped on white instead of cream. I also had a still-shrink-wrapped Tangerine Tango ink pad. I thunk and I thunk and this is what came out: 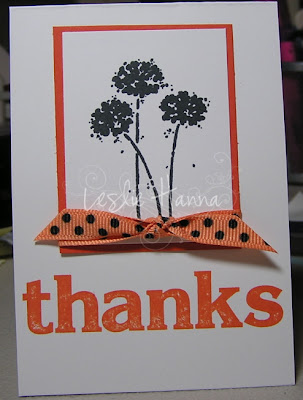 Yeah, the Thanks is a bit thin in spots, but trust me, I tried many others before I came up with 5 good ones. I actually resorted to using the Stamp-A-Ma-Jig to get them even this good. I made one pack of 5 and put them in the For The Market box.

What about the failed orange Thanks efforts? Well, I looked at them and almost threw them out in utter frustration, but then I thought I'd save them. I hacked off the bottoms of the card fronts to remove the words. Then I grabbed a scrap of some cool textured blue that was left from my Brother's b'day project. I cut it into strips, scalloped one edge, and lined it up with the rest of the card front.

Much to my dismay, I'd cut them all exactly the right size to replace the cut-off part of the card front. Unfortunately there was nothing with which to attach them to the front (no overlap.) Pooh! I was determined not to give up! I am stronger and smarter than a stinkin' piece of card stock! So I cut strips of the same blue and glued them to both the front and back seams to hold the two pieces of card stock together. That's where I am here: 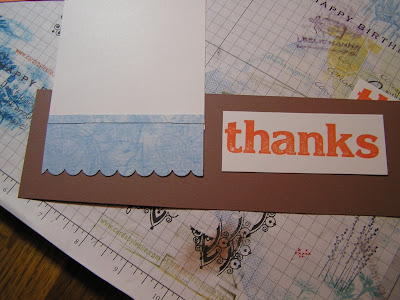 In this photo, you can see, um, you can plainly see that I have not changed that piece of grid paper in a very long time. You can also see the patched card with the blue pieces stuck to it and the crooked orange Thanks I'd hacked off earlier. I then cleverly wrapped a ribbon around the seams and called it good. I went to my stash of Thank You stamps and found this generic one: 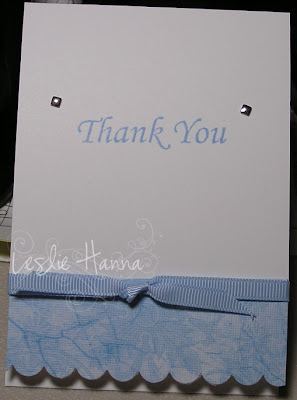 And those silver things? They are there because I had a speck of something on one of the cards, and I could not get past it. I dug into my sticky things stash and put two of these silver jobbies on each card to make it look like I meant to do that. Now I have five cards all the same, and no one will be the wiser (except you guys.)

Now this next card makes me really proud. I had four small strips of this Basic Grey paper left from last week, and I could not bear to throw them out. I saw Bordering Blue. I saw Always Artichoke. I clawed through my scrap piles and found both. This is what I made with all of it: 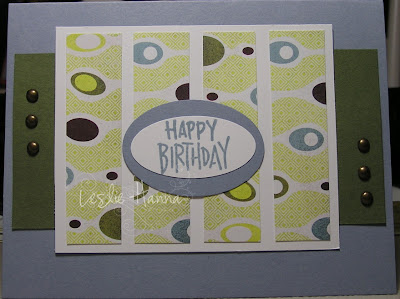 That Happy Birthday stamp is one of the first stamps I ever bought, and I just love it! I played with the layout a lot until I decided to actually center everything (well, centered is a relative term, isn't it?), or should I say I decided to not go for an asymetrical look. The brads, however, are skewed on purpose. Really!!!

But wait, there's more?!?!?! I told you I lost track of time. I had three scraps of Bella Rose DS paper. I had four scraps (read: mis-cut) of Riding Hood Red from my kit-cutting exercise. I played and cut and trimmed and came up with these three cards: 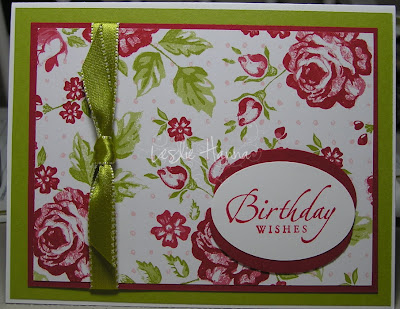 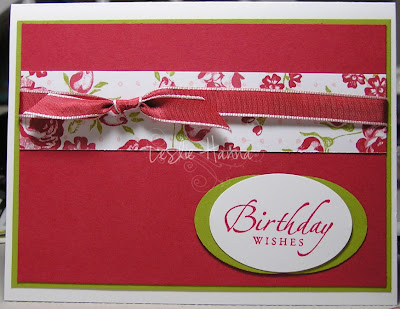 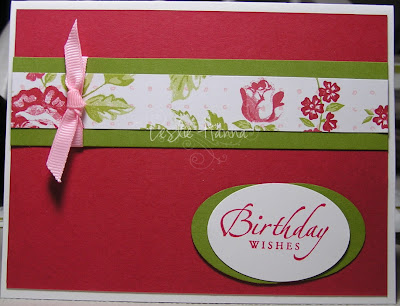 I did cut into virgin Whisper White for the bases, and one piece of Kiwi Kiss. I also broke open both the Kiwi Kiss and Riding Hood Red ribbons, and they are both wonderful! I would go so far as to say the Kiwi Kiss ribbon is to DIE for! It is thick and double-sided and scrumptious.

And then she rested. But now I must push the vaccuum around; I must clear off the Living Room table so it can hold all my retired stuff that I have to retreive from the closet in The Other Room; I must Clean Sweep what's left on the tables so I can finish setting up the stations for tomorrow. But I feel good! I fell a sense of accomplishment! I created something!!!!!

Okay, I must leave blog-land now and go forth into real life. I'll come up for air again early in the week. Thanks for stopping by!