Alright, I'll admit it: I want to be like June when I grow up. What? She's younger than me!?!? Rats! Okay, I aspire to be like June. Better? Let us begin.

This past month I have challenged myself to focus on the scrap piles in an attempt to (1) use the stuff so I do not have to (2) figure out what to do with it during the upcoming Clean Sweep as I prepare for this coming weekend's workshops. Last night I grabbed this piece of striped scrap, and I made two cards out of it. I did sacrifice a virgin piece of Barely Banana card stock for the base, but everything else was from the scrap pile. Are you proud of me? I know *I* am. ;-)

I have had this card in my head since I bought the sentiment in my last Viva Las Vegas Stamps shopping spree. I kept this retired SU set because, well, just because. So I was thrilled when I saw this sentiment, because it meant I could actually use the set again. I think that makes twice. I am hopeless. 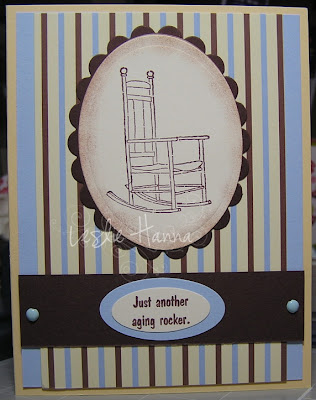 Tonight I worked on another half-baked idea I have to make a different kind of Thank You notes. Those townhouses are a bear to color! A week or so ago I had made some 3 1/2" x 5" note cards out of Whisper White card stock. I cut the card stock the long way so the cards fold on the short side, just to be different. I like to mix things up sometimes.

I have recently discovered a hidden die in my set of Olivia Alphabet dies for the Cuttlebug. It is the word thanks, all in one die. So I took a scrap of my Berry Bliss DS paper and die-cut 5 of those babies. Then I resurrected my Xyron and ran those die-cuts through. Yes, I am lazy. Then I stuck them on, and the cards looked nekked.

I kept going and added a strip of a different paper from the same cut-into pack (no virgin 12x12s were sacrificed), and I used a pink ribbon from my stash and this came out: 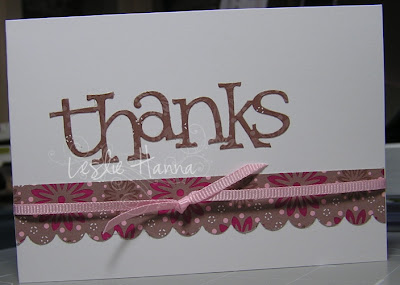 What do you think? Passable? Maybe I will make only one pack of these and stamp something on the next set. Tomorrow.
Posted by Leslie Hanna at 9:10 PM