I Should Have Used Chicken Broth, and A Card

Today was different from the start. First, Autumn is here. It was lovely when I left for work. I run hot, so temperatures in the 60's are perfect for me...not quite jacket weather. I know people who turn blue when it is less than 95 out, but not me! Nope - give me 65 and sunny and I am one happy camper, though I do not camp.

So this afternoon we had Field Day at work. My Manager had decided a while ago that we needed a Group Bonding activity, so they all planned Field Day. They reserved a building and a big field at a local park and we had games. We were divided into teams and forced to play. We had kick-ball. We had an egg race. We had blind-folded puzzle activities. We had acronym decoding. We had questionaires we had all filled out earlier this week, and we had to guess whose was whose. It was kinda fun. And we got to wear jeans to work, and play all afternoon (not at work) and go home from the park. It was a nice break in the ole daily grind.

So when I got home I decided to cook myself this Pasta Carbonara. It is sinfully good when well-made, and then there's my version. Well, it was really not all that bad, but its preparation this evening was not without a little excitement. You see, when I started to pour the wine into the hot pan (the directions said to wait until the pan was smoking hot - I read the directions!!!), when the first few dribbles hit, it burst into flames! I am talking leaping flames - like up to the range hood. And I have electric, not gas, and a ceramic stove-top, to boot, so getting that whole flaming inferno was pretty exciting. And unexpected. My first thought was to douse it with baking soda. I learned that from my kids when they were in Montessori, and they were showing me an activity during Parents' Night that involved matches. The baking soda was part of the activity. Did I ever tell you I love the Montessori method of teaching?

ANYway, I thought about getting the baking soda, as I stood there watching the flames lick at the base of my cabinets, but then I went to Plan B: Cover it to cut off the oxygen. So I put on the splatter shield I'd used for the bacon step. Like that was going to do any good, since it has holes in it, and it was full of bacon grease...it just added fuel to the fire, literally. I am a real idiot sometimes. But I laugh at myself, a lot, so it all works out. On to Plan C: Put on the lid of the pan. I dug around in the cabinet for a second and finally found it and slammed that thing down onto the still-flaming skillet. Done. Then I lifted the lid and looked at the splatter shield. Let's just say it still smells. I may have to toss it.

Chicken broth? The recipe said if you are not into wine, you could use chicken broth to deglaze the pan. I should have used chicken broth. But I have to say that wine adds a really nice flavor to the finished dish.

So I have decided to go back to my new lifestyle of eating breakfast and lunch at work, and skipping dinner. No food to spoil or turn into science experiments. No flaming skillets. No dishes to wash. Think of all that extra time I'll have to STAMP!

Oh, here is some evidence of the flames: 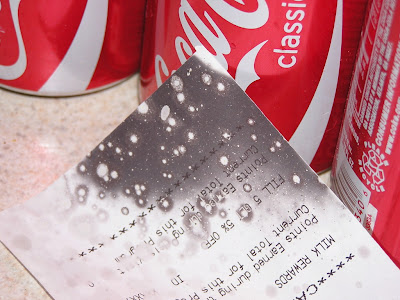 That is a scorched receipt that was innocently laying on the counter next to some really old cans of soda. First the receipt was spattered with some bacon grease, then it was caught in the flaming inferno, but just a little. Sigh ....

So then I retired to the Stamping Spot that is my Dining Room table, and I broke into my new PTI Mazel Tov set. (BTW, Mazel = Luck and Tov = Good ... so Mazel Tov = Good Luck. Your Hebrew lesson for the day. My parents did not send me to Hebrew School for 10 years for nothing!)

Tonight I was going to make two each Bar and Bat Mitzvah cards. (Hebrew Lesson #2: Mitzvah = Commandment. Bar = Son. Bat [or Bas] = Daughter. When a Jewish child turns 13, they reach the age of majority and they celebrate becoming a Son or Daughter of the Commandment, thus Bar Mitzvah or Bat Mitzvah. You can read about it here if you are interested.) In my synagogue, after your Bar or Bat Mitzvah, you were allowed to attend the Adult services instead of the Children's service. It was a big deal, trust me. ;-)

Back to the card. I started with Nichole's project as inspiration, but switched it up as I always do. Jewish "colors" are traditionally blue and white, or blue and silver, so I used SU's Brushed Silver card stock as the accent with PTI's Blue Shimmer card stock for the layer. The base is SU's Shimmer White. 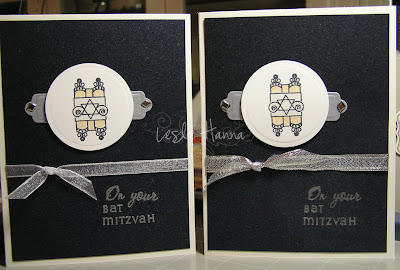 You do not really say "Happy Bat Mitzvah", so I chose the words "On your Bat Mitzvah" instead. The sentiments are embossed with detail silver. The one on the left is embossed better, but the one on the right is straighter. If you average them ... oh, never mind.

I used two different ribbons on the two cards above, because I could not decide, but I am not sure I'll use ribbon on the boy's version of these. I'd also like to try a silver layer under the blue, or maybe trimming down the blue a bit. I need to play with these some more.

And Rosh Hashanah (Head of the Year, or New Year) is next week, so I should probably whip out a few cards for that tomorrow. Oh, yeah, like I'd actually send any myself. That would require planning. Or forethought. I still have not sent out my Season's Greetings cards from last year. Hey, does that mean I am ahead for this year? No? Can't blame me for trying.