Mostly Blathering, and a Sympathy Card

'Twas another good day. Well, except for the interminable time spent at The Day Job, that is. I actually got almost all of my errands run after work tonight! I stopped at Chloe's to check on the card inventory - only sold 2. Ah, well.

I hit up the hardware store and got screws and anchors to mount the Bygel rails, grout to fill in the holes left when my old screen door was removed, leather work gloves for handling the glass mirror tiles, and knobs for my IKEA cabinet doors. I had a list, I checked it twice, and I called it done.

I crossed the parking lot to hit up the grocery store. I am OUT of TP. How does this happen?! It usually happens on the day of The Big Storm - you know, when they predict snow the night before so schools close just in case it might snow, and then everyone goes to the grocery for milk, bread and TP? On those days I really AM out of TP, but I refuse to go lest they think me one of them. ANYway, when I realized I was out this morning, I immediately thought of what natural disasters might happen between 6 am and 6 pm to make me look like an idiot, but nothing happened, so I was in and out of the grocery with TP under one arm, and um, a bag of other stuff. This other stuff consisted of about 25 jalapeno peppers, some cream cheese and ... ready ... some BACON! You know what else? PB! Yep. One of the Bacon Blog Hoppers said he liked bacon on PB, so since he said he might try my bacon-wrapped-cream-cheese-stuffed-jalapeno recipe, I thought I'd try his recipe. It's all about sharing and growing. Right?

By the time I got home this evening, I was wiped-out tired. I threw a load of towels into the washer (I am out of clean towels, too ... how does this HAPPEN?!?!?) and sat down with the laptop to try and catch up on my 300+ unread Google Reader entries. Good gracious, but people are posting like crazy, and I keep finding new, cool blogs to follow, and keeping up is getting tougher and tougher. BUT, in my blurfing, I look for neat projects to steal, er, CASE, and um, make them my own. In all fairness, I do not think I have ever 100% stolen a card. I cannot do that. Why? Because 1) I do guilt really well and I like to sleep at night, and 2) by the time I start futzing with my version, I decide I want to change something. That's what I do - futz.

So at long last, I get to The Card. Tonight's CASE is inspired by this card on Brenda's blog. She cut or punched out the squares, but I had other plans. There is a name for the technique I am about to attempt to describe, but since I cannot remember it, here goes. 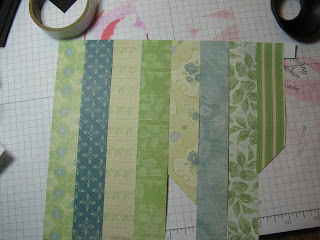 I took my pack of retired Porcelain Prints DSP and cut a few 1" strips from several of the two-sided papers.

I lined up the strips (to the best of my ability) on a 1/2 sheet of printer paper and taped them down. Then I turned the paper 90 degrees and cut strips, which yielded strips of squares ... 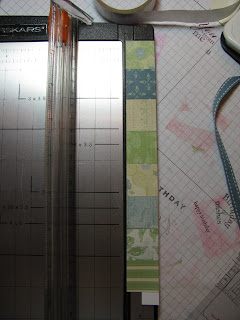 You'll need to imagine the next part cuz I forgot to take a picture before I hacked into the result.

I took another 1/2 sheet of printer paper and attached the first strip along one edge. Then I took the next strip and lined it up one square down. I worked my way across the paper. Then I trimmed the bottom edge, and attached all those pieces to the staggered tops.

Okay, I am sure I've lost you, because I've lost myself. I promise I'll make another one tomorrow and take better pics. Or someone could tell me the name of the technique so I can just link to it! 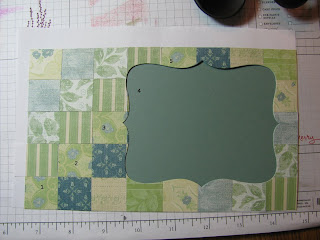 After I was done with all that staggering business, I punched out a Top Note die shape with my Big Shot.

In this pic I numbered the top square of each strip so you can see the staggering thing. Starting in the bottom left corner, laying left-to-right, is strip #1. If you look where the other strips start, it might help. Or not. 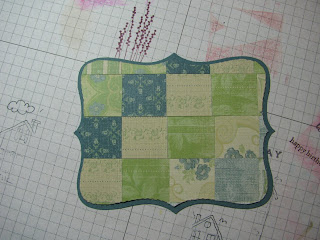 ANYway, here is the punched-out Top Note die shape. I trimmed the edge along the perforations and layered it on another Top Note shape of the coordinating blue. 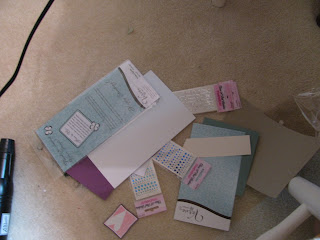 Then I had a crafting mishap. My table is once again loaded up, so I had some stuff piled up on the lamp base, which is not flat. All that stuff decided that flat was good, so it attempted to become flat by sliding off the table and onto the floor, where it indeed became flat. I showed that stuff by putting it back on the table, mostly so the cat did not make it into a new bed. 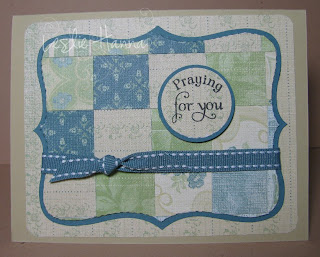 And here is my finished card. See? I changed it! Her SU sentiment was placed over the ribbon, but I had an unfortunate uneven series of squares (surprise!) that needed to be covered up, so I opted for a layered circle sentiment to perform that duty. I selected a sentiment from the still-out Verve set of Circular Sayings - one I would not normally use. Thus a sympathy card was born.

Next time I'll listen to Brenda and punch out the stinkin' squares. If I ever do this for a workshop, that's what I'll have The Ladies do, because if I ask them to do this, they might get up and leave.

Okay, it is past my bedtime, and I must retire for the evening. I thank you for stopping by!