It's all about the bacon. Somehow, a Twitter discussion spun out of control (actually, most of them do, but that's another post for another time), and now we have a Bacon Blog Hop... I kid you not. 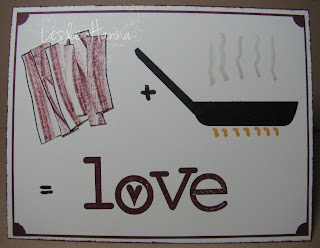 With apologies to any vegetarians or vegans, is there anything better than the smell of frying bacon in the morning? C'mon, you know you like it!

What *I* like right now is I remembered I had this SU set called A Light Heart, and the love stamp from the set was the perfect image for this card. :-)

There is a Twitter account called allbacon. Then there's jesusbacon, where I found this link: bacon cheeseburger donuts. Go look ... I'll wait ... ... ... ... Then there's Kevin Bacon, and his Six Degrees, but we'll skip that one today and just focus on the food.

Okay, moving right along. I love bacon, but I rarely buy it because, living alone, I always seem to cook the whole package, and then I gnaw on it until it is all gone. Then I am sick.

So I stopped buying and consuming bacon. Then I met this: Marlboro Man's Second Favorite Sandwich. Oh, my goodness. Such goodness. It requires you to cook not just any bacon, but pepper bacon. I've tried it with the plain, and it is just not the same. (Hey that rhymes!) Get the pepper bacon. Trust me on this one.

It also requires you to use some of the bacon 'juice' (Emeril - Mr. Pork Fat Rules - calls it that, as it is much more appetizing than bacon 'fat' or 'grease' or even 'drippings') to cook the chicken. This recipe is a bacon-lover's dream-come-true. As a single person, I cook it all and eat off it for days. It is really good cold, too. I have nothing bad to say about this recipe. BTW, I skip the bread in both this recipe and Marlboro Man's Favorite Sandwich. I just cannot be bothered. And if you skip all the bread and the butter to cook it, then you can eat more of the good stuff. Right? RIGHT?!

But I have to tell you, my absolute favorite bacon is not American bacon - what the Two Fat Ladies used to call 'stripe-y' bacon. Nope. My all-time favorite bacon is back bacon, which is what you get in Ireland or Scotland, which is part of the reason I went there on vacation one year. Our equivalent here would be Canadian Style bacon. I have been told American (USA) butchers do not butcher the hog in the same way, so we are stuck with stripe-y bacon. So sad.

I am supposed to end my post with my favorite bacon recipe, and right now that is Bacon-Wrapped Jalepeno Thingies, without a doubt. Can you tell I like The Pioneer Woman's recipes? I have also accused her of being single-handedly responsible for the fattening of America, but I digress.

So, at long last, here is the very complex (not) recipe, dutifully copied from PW's site. If you need pictures - you can go there LATER.

Halve each of the peppers and discard the seeds and membrane.
Stuff each pepper half with cream cheese.
Wrap a piece of bacon around the stuffed pepper half and secure it with a tooth pick.

Bake in a pan with a rack @ 375 degrees for 20-25 minutes. If the bacon is not cooked to your liking, turn on the broiler for a few minutes.

Serve hot or at room temperature. I've even eaten them cold the next day!

Alternative uses: pop a few on top of your burger for a little extra kick. :-)

Next up on this bacon adventure is Angelique Cain over at http://sweetsandtarts.blogspot.com/2009/08/welcome-to-first-annual-twitter-bacon.html. BTW, she makes the cutest little paper bats. :-) So hop on over to see what she has to say about bacon!