Why I Do Not Make Cards From Scraps

[Warning: Long stream of consciousness ... go get a cuppa joe.]

I try. Really, I do! I keep all my usable scraps. I (eventually) organize them into boxes by color (all the reds together, all the blues, etc.). I have them all lined up on a shelf in my closet where they are easy to get to. But I shun them.

I do occasionally work out of my scrap heaps in the Living Room and Dining Room, but mostly because it makes it easier to do the Clean Sweep, not for any other reason. Oh, sometimes I am TOTALLY inspired by scraps heaped together, side by each, and just screaming to be used together, but that happens only rarely.

I do my best work when I have stamps I plan to use together, then I think of designs that might go with the particular images. But starting from a scrap and working in the other direction? Not so much. Let's take tonight's disaster of a project and do a case study, shall we?

First we have the innocent blue scrap: 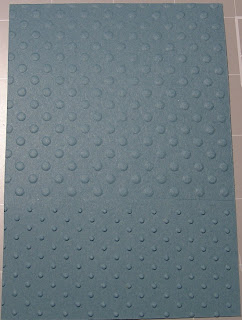 This humble piece of dotted blue is the result of a Bad Demo moment during Sunday afternoon's workshop. One of my customers, when RSVPing for Sunday afternoon, asked about using her Fiskars embossing plates in the Cuttlebug and also the Big Shot, because she has the Fiskars plates, but gets weary using that thingamabob to emboss with them. I agreed to demonstrate the plates in the Cuttlebug for her.

This blue scrap was handy, so I did one part with the Fiskars plate (the top) and just for giggles I took out the Cuttlebug Swiss Dots embossing folder and used it on the bottom.

There were many oooohs and aaaaahs, and she decided that when she can afford to, she may just buy the Big Shot from me (cuz she likes me and wants to support my business. Yeah, she said that! Really!) So I guess I turned that Bad Demo moment into a potential sale. Maybe.

ANYway, I had this piece of dotted blue that just begged for a piece of ribbon to be tied betwixt the two different embossed areas, and that was my going-in position with this whole scrap thing.

Here I have the ribbon I'd planned to use: 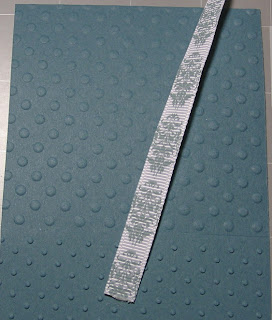 See? The colors even almost go together. Mostly.

Next I took out my handy colors-that-go-with-the-In-Colors cheat sheet from last year, because this was Blue Bayou and I wanted a quick answer. The answer I got was Mellow Moss, Bravo Burgundy and Kraft.

So I went to my scrap boxes, retrieved various pieces of said colors, and got to this: 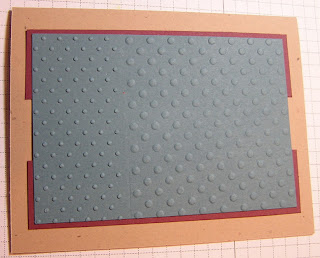 I kinda liked that I did not have a big enough piece of the Burgundy to do a whole layer, and it was just on two sides. But overall? Eh - boring. 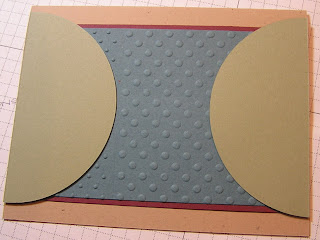 Then I took the Mellow Moss and used my newly-arrived (like today) Circle Nestabilities, cut a circle, measured it and cut it in half. Then I laid the halves on the card.

At first I thought it would look cool to put a Jumbo Eyelet in each half-circle and tie them together with that ribbon, but I thought it might look like the ribbon should be untied, and I was not sure how to not imply that, so I kept thinking. After you see what I did instead, you may agree that this would have been the better choice. 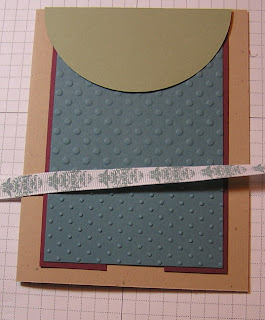 THIS is where I went instead...just one half-circle. This would let me tie the ribbon where I'd originally planned, but it still looked like the flap should be opened. What to do ... what to do ..... 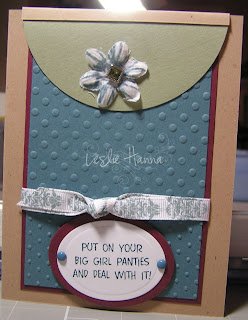 ...this is the result. The half-circle looked weird at the top, so I made a little folded thingie to go over the top of the card. It is held in place with 1/8" red sticky strip. Not going anywhere.

The flower is from my rarely-used SU Pretties kit. I stamped a flower on it with Blue Bayou ink and attached it with one of my rarely-used SU rhinestone brads. I was still worried about that darned flap, so I stuck it down with red sticky tape. It's not going anywhere, either. (And it still looks weird.)

I tied my ribbon as I'd originally planned, then ... a sentiment... I actually had this one out because I'd planned something else for it (I'll do that project tomorrow), so I stamped it and I used my oval Nestabilities to cut the two ovals and layer them on the card. I cleverly slopped it over the bottom of the blue panel, and it hides the gap in the Burgundy pieces. The brads are from pinkhedgehogpapercrafts.com, and they are the Fresh Color that goes with the SU Blue Bayou.

Now just look at that card! I think it is bizarre. And every time I do this, the card goes into the One Of A Kind bin, and after it does not sell, it gets given away to the troops, or some other worthy cause. I just do not know when to stop with this whole scraps thing!

Ya know what? If I got rid of all that scrap in the other room, I'd clear off a whole shelf that could hold other stash that is just lying around without a home. Maybe ..... I should give it away. What do you think? Hmmmm.... a contest perhaps? Where you'd answer an easy question and I'd reward you with an envelope full of card stock scraps in your color of choice? Maaaaaaybe? I kinda like this idea. And I still owe all of you who have been experimenting with that whole subscription thing. Hmmm ... I'll get back with you on this. :-)

Meanwhile, I made some real 'Old Reliable' cards yesterday on my day off. 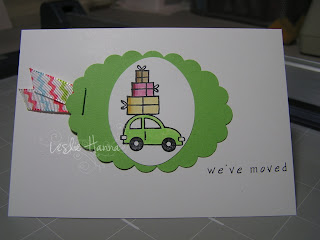 This is my Just Moved card I offer in a 5-pack. I had one pack left, so I made a few more. Fifteen cards, actually, which is three packs, plus a few singles.

I'd almost convinced myself to sell all my Marvy Punches because I now own the Nestabilities, but I found that the punches were the perfect size to layer like this, so since they're paid for, I may just hold onto them a while longer.

Check out the coloring. The car is colored with the Gable Green marker, but the boxes on top are colored with ... my new Copics! I shaded and everything! (Pats self on back.) They do go on quite nicely, but I have to say that the green for the car did, too. Just based on this example, I'm not sure I see a major difference. I need to do more controlled tests to be convinced.

Oh, and why did I not use my green Copics on the car? Because I was an idiot and failed to order them with the rest of the markers. I'm okay now ... they have been ordered and shipped. Sigh. 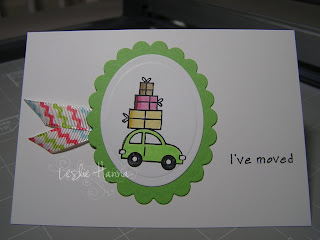 I also experimented with cutting the car out with the Nesties, and layering it with a Nestie scalloped oval, but it was a lot of work, and doing this times 15 did not sound like a lot of fun, so I used the punches instead. But I did make a few singles using these Nesties ovals so they did not go to waste. 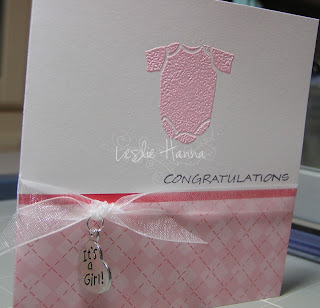 I also had someone ask for this baby card for a girl. I had sold out of the pink ones, and only had one of the boy cards left anyway, so I made a few more of each for my inventory.

(Both the onesie and the sentiment are by Savvy Stamps. Card stock by A Muse.)

One more thing I wanted to share...I took kitty to the Vet yesterday for her annual check-up and shots, and I made a fatal error: I let her see the crate before I had picked her up. Usually I set the crate open on the bed, then retrieve her from the other room, and she's in the box before she can resist. Having seen the box, though, I had to dig her out from under the table. Poor thing.

And once we arrive at the Vet and I get her onto the examination table, she usually is unhappy, but not witchy. Oh, she complains, but usually just hisses a lot. But yesterday, she was totally in A Mood. At one point the Vet looked at me, smiled (he smiles a lot!), and said, "I think she had other plans for this morning." Too funny! I really like my Vet. ;-)

Okay - time for bed. I'll get back with you on the Great Scrap Giveaway. Hey, it could happen.