I've been mostly horizontal for a day and a half - something I ate, I think. I hope. Now that the system has been purged, so to speak, I am now too weak to do much of anything. But in an effort to remain a functional member of society, I did drag myself off the couch and out from under the cat to fix some tea and to try and stamp something.

As I sat at the Captain's Table, I spied the two negatives from my floofy bird die cuts and decided I needed to save some of the inch or so along the side before I tossed them. Once I had the strips of precious paper, it took me the better part of two hours, but I made two cards: 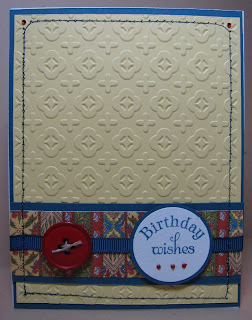 Yep, this was all because of the 1 1/2" strip of paper I could not bear to throw away. Can you tell I still had that sentiment still out and available? How convenient! ;-) 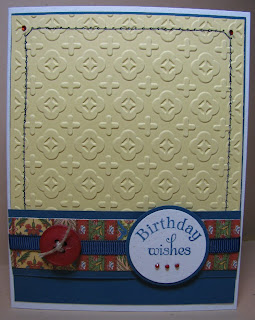 These are the same except this one has a shorter yellow piece. I'd pulled this piece of So Saffron from the Mega Scrap Heap and embossed it, but I soon found out it had stamping on one side of it and I'd embossed the wrong side, so I had to cut it off.

Did you notice something new and different here? I sewed! I DID! I took out my old Kenmore that I got as a wedding present a looooong time ago, and I used it! Obviously, I have a bit of a problem with the corners, but I embellished them in the hope that it looks like I meant to do that.

And ya know what? I might just be bold and enter these two in Dreena's color (colour) challenge since they use the same piece of paper as the others. Yeah, I am SO going to do that! YOU should play, too! You have until the 10th, so come on over and join us!

Now I need a nap. Thanks for stopping by!
Posted by Leslie Hanna at 8:25 PM