I don't know when to quit; when to admit I've been beaten. After this episode, I think I'll be fine with the knowledge that I have the skillz to make a shaped card if I never need to. Otherwise, I'll stick to plain ol' A2.

After the owl disaster, I decided to try a less-fussy shape, and used the same balloon shape as this card. I sized it to just under A2 size and this is what came out: 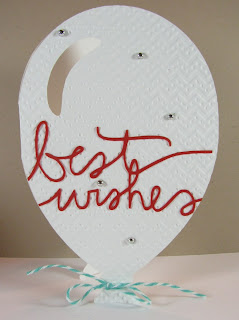 The making of the shape isn't the difficult part for me. Nope. The tough part for me is what to do with it once it's been cut. I usually go crazy and do strange things. This time I've embossed only the card front, which was kinda fun, then I manipulated one of the free images we got in our A Cut Above class and used only the sentiment, sized it, then cut it out of red. I lost the dot for the 'i', but I was okay with that, thinking I'd just add a faux gem. Then I chose silver, and I had to add a few more to make it look less out-of-place. Then I stopped.

It's not too bad. Let me show you of bit of the design process. Here is the image from Silhouette Studio before I sent it to cut:

I lined up two of the balloons, eliminated the extra piece from what would become the inside of the card, overlapped them and welded them to get that nifty attached part. 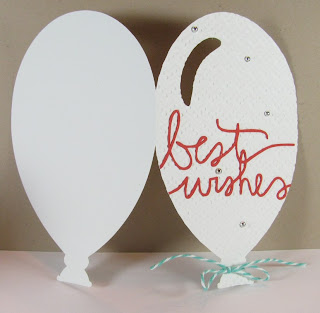 I think I'll go back to plain A2 cards now, though. In fact, some of the results of my "It's only $35 for the class ... but I NEED that stuff" shopping has arrived and I should probably use some of it. Yeah, I am weak. I hope to have some more cards to share later this weekend.


Thanks for stopping by!
Posted by Leslie Hanna at 3:56 PM