I CANNOT BELIEVE I missed the previous Jingle Belles challenge. *hangs head in shame* To make up for it, I jumped on this one, which is ever-so-cleverly called 'Twas the Sketch Before Christmas, and it's - you guessed it: a sketch!

Here is the sketch: 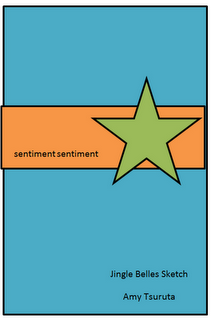 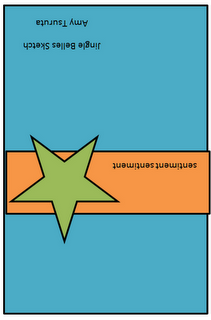 because I'm ornery that way. No, in truth, my papers made me flip it. Here's my card: 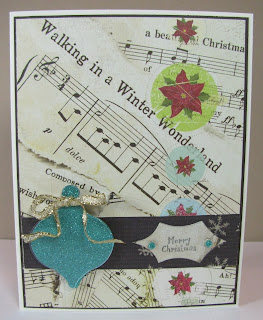 See? I had to flip the sketch! Who could cover up that yummy paper?! It's Memory Box Yuletide, and I just opened it for the first time today. How sad is that?!! I went through the whole season last year and never opened it. I think that speaks volumes for my SABLE (look it up in the left side bar).

ANYway, back to the card. That paper did all the work. I just cut a strip of a brown piece and went to work on the other parts-is-parts. I wanted to put a snowflake there and layer it up, but I couldn't get the punch to punch the glitter paper. I'm pretty sure I have a snowflake die ... somewhere ... I couldn't find it so I moved on to Plan B. I opened (*ahem* do you see a pattern here?) my SU stocking accessories die I got last year when I purchased the stocking die and used it to cut the ornament shape.

Actually, I started out with the idea to use a frosted box I saved from a purchase and use the die on that, and it worked swell, but the ornament disappeared into the card, so I went back and die-cut the glimmery blue ornament to place behind it. You'd think I wouldn't need the clear one then, right? Pffth. Layers are good.

The gold ribbon is wired (much like me this weekend) and for the first time ever, I like the wired ribbon on a card. I love how it holds its shape! Look at those sassy ends, will you?!

Now, the sentiment. That took me a while. What I really need is a pack of those Class A Peel stickers that say Merry Christmas, but I only have the boring Happy Birthday/Anniversary/etc. sets. I ended up stamping the sentiment on the clear, die-cut holly leaf, then had the same "disappears into the card" issue, so I die-cut another piece of paper to put behind it. It wasn't until I globbed on some Crystal Effects to hold things together that I realized I could have just stamped on the paper. Life's tough all over, isn't it?

So there's my story and I'm sticking to it.

I think I'm done stamping for the weekend. :)

Thanks for stopping by!
Posted by Leslie Hanna at 7:29 PM