While I was making this card last night, I shook my head at myself a lot, but I kept going anyway, mostly because I could. I started out innocently enough playing with my Silhouette Cameo, largely influenced to do so by the first lesson in Part 2 of the A Cut Above online class I'm taking. The second half of the 3-week class focuses on the Silhouette.

I cut a bunch of flowers out of Poppy Parade with the idea to make a row of small flowers across the front of a card, but once I got into The Captain's Quarters with the cut flowers, I lost control. Let me show you the card, then I'll explain: 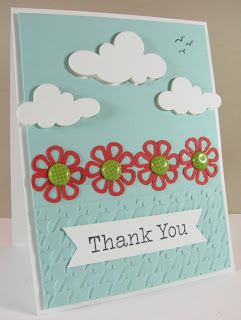 The bottom part of the card is a nod to the Partial Embossing class. I even drew a scored line across the top edge of the embossing. See? I was listening in class!  Next, I die-cut some clouds out of the blue piece, then cut some more out of white. This was a nod to our Die Cutting Both Positive and Negative lesson. More on that in a sec.

In keeping with the more-is-more theme of this card, I decided to stick the poppy flowers down and put GREEN brads in their centers. I ... don't know why. Well, actually I DO know why. I had matchy-matchy blue & poppy brads in my hand and was getting all *yawn* boooooring, until I spied the green brads in the same box and, well, yeah -- I used them.

I stuck the whole blue piece to the white base with 34725 dimensionals, then I went to work on the clouds: 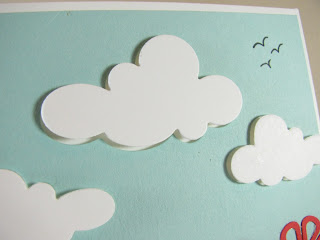 This is the whole positive & negative thing. Instead of just leaving the white base to show through the die-cut cloud openings, I popped up some additional white clouds directly in the openings, and they are actually double-popped up to be taller than the blue layer. LOTS of dimension going on here.

Finally, I added some birds (hey, it's what I do) mostly to hide some unexplained scratches on the card stock.

So there you have it: an over-the-top combination homework project. Now that I look at it, maybe it's not as fugly as I originally thought.

Oh, it's past Wednesday night, isn't it? Time to pick a winner for my Blogiversary G-I-V-E-A-W-A-Y! Just so you know I'm on the up-and-up, there were 13 comments but only 10 people, so I used random.org and picked a number between 1 and 10:

The 9th person who commented was ... drum-roll please ... LAUREN! Congratulations! Please email me your mailing address, because I know I've lost it! :D

Thanks to everyone for playing, and thanks for stopping by!