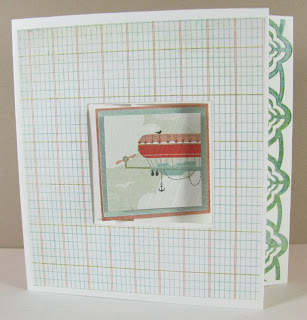 Let me show you the parts-is-parts so maybe it makes sense.  (I didn't get it until Julie showed it to us on the class video.)

Here is the unbuckled front: 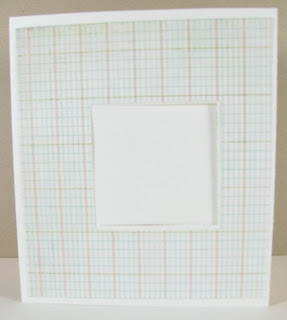 ... the right side that tucks into the front panel: 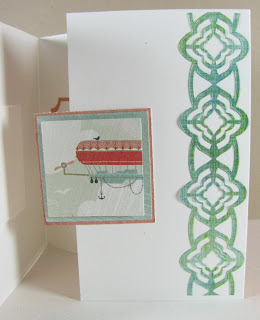 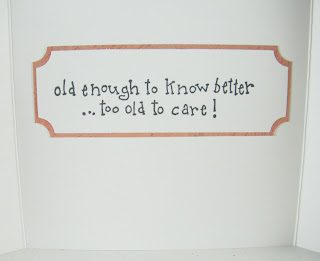 You just know there's a story here, right? RIGHT! Let's start with the paper. You see, Julie was showing us how to stamp on the card front, then coordinate the stamping with the little square piece that becomes the buckle. Me? Nah! I don't do straight stamping, so this wasn't going to work for me. Instead, I took the difficult road and opted to cut paper to fit.

Let's look at that front again:

We were supposed to make the buckle image the focal point of the card, so I needed a not-in-your-face pattern, and I chose this one from the Basic Grey What's Up 6x6 pack. Actually, all the papers I used are from that pack. The problem is, I now had to cut out a square in the middle of the paper to expose the flap I'd cut in the white base. But I did it!

Moving on, let's look at that side panel:

That tab piece took me almost as much time as cutting the center square out of the paper on the front. I decided to use the piece of paper that has hot air balloons, thus getting an image with no stamping. This is my third and final attempt at doing that. The first two layered pieces were too small for the opening. I'm sure Julie gave us dimensions ... somewhere, but noooooo, let's wing it and see if we can do it the hard way. The red-ish layer under the square is to make up for it still being too small. I'd had enough.

The handsome tape down the right edge is some Basic Grey paper ribbon tape I've had forever, and I've just used about 4" of it. (go me)

Now, let's talk about the innards:

I don't usually do the insides of my cards, but it was part of the lesson, so I did. We were just supposed to stamp on the inside, which I did, but I stamped it upside down! 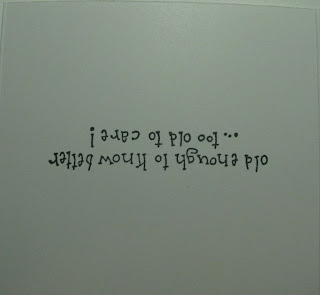 GAH!I even practiced on my grid paper, and I still did it upside down on the card. But that's okay! It gave me the opportunity to stamp it again and employ one of the techniques we learned in the A Cut Above class -- to extend the length of a die. 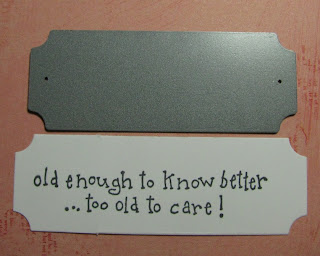 It's not extended much, but it was necessary for the sentiment to fit. I cut the red-ish layer by hand and used a ticket corner punch to punch out the ... corners, and it was a perfect fit!

The lesson here is LISTEN TO THE INSTRUCTOR! But I've gotta tell you, I really like this buckle card better than what I thought we were going to make. :)

In other news, I'm still wrestling with the Silhouette software, trying to bend it to my will. I'm losing. The Edit Points project has me all frustrated, but I shall persevere! I SHALL! *shakes fist*