Ah, the power of the Interwebz. One of my tweeps and bloggy friends, Donna, posted this card for the Moxie Fab Gingham Challenge, and I said, "Wha?". I ran to look at the Moxie Fab post. Who remembers something aaaaaalllll the way back to early May? But the great thing is we have until June 4th to post a card, so I got to work!

I knew immediately what I'd use, too! I knew I had some A*Muse gingham papers in The Heaplet, but I wasn't sure which color(s). I found both light blue and light pink, so baby cards it was! 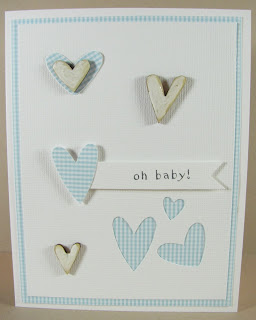 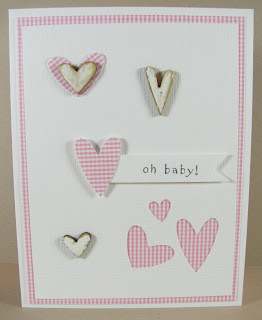 I punched openings in the white layer with my SU Heart to Heart punch, then layered that over the gingham. I used two gingham hearts (punched from some smaller pieces of the same gingham papers) on the card front, and added some Studio Calico wood veneer hearts. I covered the wood hearts with Inkssentials Enamel Accents* to make them white and shiny. In hindsight, I might use white paint next time. We'll see what I think once it dries ... maybe tomorrow.

The sentiment is from A*Muse, and I just love it! I think the last time I used it was on a card with an elaborate Corset. HAHA! Yeah, this is a little different and perhaps more appropriate.

So I've pretty much disappeared those two papers from The Heaplet. Baby steps, people. Baby steps. (no pun intended)

* When I first applied the enamel accents, it came out clear. I shook it a little and it came out white, so I mixed some into the clear stuff that was already on the wood hearts, which made them a little streaky. Just a word of caution in case your bottles of enamel accents have been sitting on the shelf as long as mine have. :(
Posted by Leslie Hanna at 7:59 PM