I Almost Met The Bloggess

I don't know if you follow Jenny Lawson's blog, but I think she is hysterical. She is also known as The Bloggess. She does toss around some colorful language, and even though it generally makes me cringe, in her contexts it seems to work.

I also bought her book “Let’s Pretend This Never Happened (A Mostly True Memoir)”, and oh my gosh, I laughed through the whole thing. It also explains a lot.

Well, she's on a book tour, and when she mentioned she'd be in MD, I thought I might go see her if it wasn't too far. Today I read that she was going to be HERE, in my little town! I mentioned in this morning's blog that she was scheduled to be at the Gaithersburg Book Festival, so I wandered over to our City Hall to check it out. I found she wasn't scheduled to speak until 4:40, so dejected, I came home, but I did go back later. Note: this is unheard of in my world. Once I'm home, I stay. So yeah, this was a big deal.

I headed back around 2:30, figuring there'd be lines and crowds and ... we all know how much I detest both, so by being early, I snagged a seat and stayed put. I was in the H. L. Mencken Non-Fiction Pavilion, and I listened to the two people scheduled before The Bloggess. Whoa, I need to get out more.

The first speaker on my watch was Sara Taber, author of “Born Under an Assumed Name: The Memoir of a Cold War Spy’s Daughter”. It's about growing up as the daughter of a CIA operative and living all over the world. Her book was part of her effort to deal with her feeling of not belonging anywhere, and her relationship with her father. Sounds awesome!

Next up was Steve Coll, a two-time Pulitzer Prize winning author and journalist, whose latest book, “Private Empire: ExxonMobil and American Power” investigates the notoriously secretive ExxonMobil Corporation, revealing the true extent of its power. It was a fascinating talk. I'm not usually interested in reading serious stuff like this, but oh, wow, is he a captivating speaker. Read his bio -- he's amazing.

Finally, as the seats filled up and the place was Standing Room Only, I spotted a police escort and Jenny Lawson arrived to a standing ovation. (Sorry about the pics, I zoomed in on my phone.) Here she's being introduced. 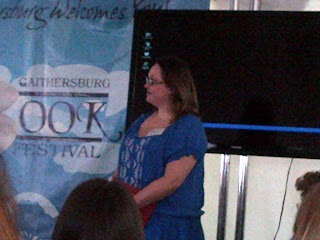 When she started talking, we all laughed. OMG, is she funny! 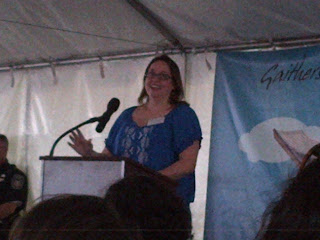 She talks just like she writes. She read us her disclaimer about offending us after she'd probably already offended some of the people in the crowd. But then again, we know her, and we fully expected to be offended. It's WHY WE WERE THERE.

She read some passages from her book ... 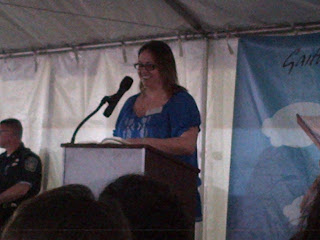 so funny. The chapter she chose to read us was her near-overdose on Ex-Lax. 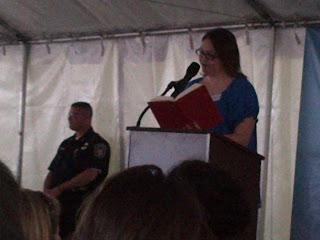 Yes, intestinal distress can be hysterical. See Mr Policeman? They were everywhere.

After the reading, as all the other writers had done, she took questions from the audience. That part was just as good as the prepared part of her show. So fun, so real, so down-to-earth. She is one sweet lady.

Afterwards, we all headed to the tent where she'd be signing her books. It was a looooong, line. In fact, people were in line while she was still speaking, so we were waaaaay back. Boo. We chatted with each other about where we were from, our favorite taxidermied critter, our favorite line in the book, and we people-watched. There were some, er, strange sightings. Like ... what's up with this? 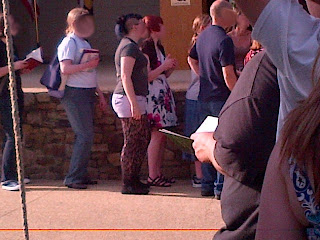 The short shorts, the patterned stockings, the shaved head, the blue hair. NOT attractive. Or maybe that was the intent. I don't get out much.

I toughed it out until I was out of water and about half the line was gone: 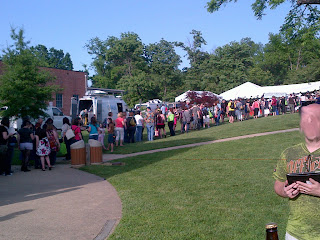 The line doubled back on itself, so this is about half of the remaining half. Like I said: long line. But it was a pretty day!

Actually, it was too hot for me, so I bailed. I decided I didn't need a signature, so I went home and showered off the hot. Although, she did bring Copernicus with her (A hug is a strangle you haven't finished yet), so I missed that photo op, too. I'm okay with that! Really! I saw her, live and in person, so I can check that off my bucket list.

In closing, I bring you a big dog: 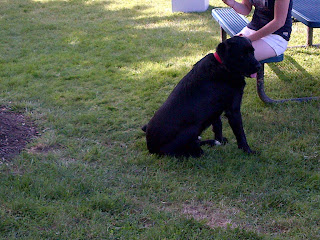 because I was bored standing there and he was so handsome.

I think if I were to spend all day at this book festival, I'd spend a lot of money. I mean, I only listened to two speakers besides The Bloggess (whose book I already have), and I want to read both of the other people's books. Can you imagine if I heard all twelve non-fiction speakers? What about the other eight pavilions that also had speakers all day long? Yikes. I may have a weakness for books. It may rival my weakness for pretty paper and Washi tape. Even so, I think I'll go again next year. I like to live dangerously.

And if Jenny Lawson, aka: The Bloggess is ever scheduled to be anywhere near you, GO. You must GO SEE HER. You won't be sorry.