The Rule of Three

In the stampy world, we follow the rule of three, and if not three, then an odd number, but for the sake of my tale tonight it's a rule of three. The focal point of a card is a function of thirds, and images or embellishments work best in threes.

In life, too, things happen in threes, both good and bad. Let's take, for instance, the mail. Most of you know by now I L-O-V-E LOVE my Post Office. LOOOVE those guys. I might bake for them this year, even.  But my current personal postal delivery person? Not so much. My previous postal delivery person would put something inside my door if it wouldn't fit into the tiny opening in our communal lock box. Not this one, nope. Just look at this: 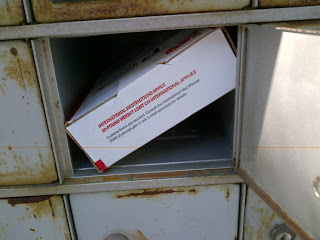 This was a small flat-rate box full of washi tape. Do you see that lip on the door opening? The one up against which the box is wedged? Yeah, pffth. When the postal delivery person opens the BACK of the lock box, there are no small doors like this, so no lips. They don't seem to understand this box cannot be un-wedged by the recipient. Fortunately for me, I could hack open the edge of the box and pull out the smaller packages inside, and when finished, I crushed this box to get it out.  Now, I ask you, what if it had been a book? Hmmm? I would have had to resort to a nasty message wedged behind it, if I could get my hand in that far. Okay, that's one. 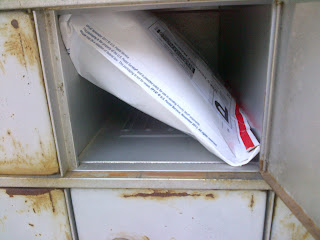 Flat rate envelope. Edges bent up on both sides. I couldn't un-wedge this one, either, so I cut it open, emptied it, and saved the mangled envelope as evidence. What if this had been card stock? That's two.

I printed off both of those pictures and put it with the mangled envelope, intending to go to the local Post Office branch last Saturday and complain loudly. Then I opted to wait and see if there was a #3. There was. 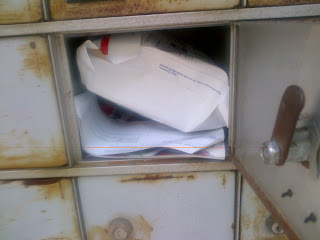 Please save me. I did finally un-wedge this one, but oh, my word. The whole box, including the post on which it stands, complained loudly. The neighbors were entertained, too. I was not happy.

I don't know what sort of favor this person thinks they're doing for me, but I really wish they'd stop. And I do plan to go to the Post office this Saturday, with all three photos and the mangled envelope, and register an official complaint. Hmph.

Now about that stampy rule of three. Last night I alluded to a card that desperately needed saving from a glue mishap.  I ended up saving it by adding three additional images. I DID! Lookie: 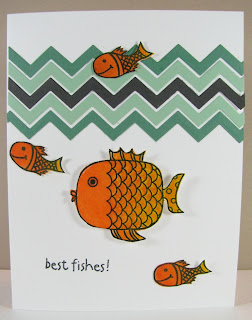 This all started when I saw last week's Play Date Cafe challenge: 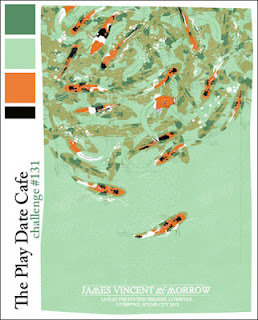 I immediately knew I'd use the lone gold fish I had left over from some other card (image by Hero Arts). I spent the next two days working out the green part. I had this idea to use the chevron digital image* we got as part of our A Cut Above class and fill it with the greens, which I did here:

Then, for some reason that escapes me now, I abandoned that idea and ended up going back to print some color rectangles of the greens so I could just die-cut some chevrons with my MFT dies:

Don't ask, because I don't know.

Now, about those smaller fish that come in threes.  Ahem. Well, you might say two of them cover unfortunate accidents. The one above the chevrons covers some glue that I managed to erase with my adhesive remover, but that left an irremovable smudge behind. It was bad.  The second one covers a schmear of Gelato that happened after I did this: 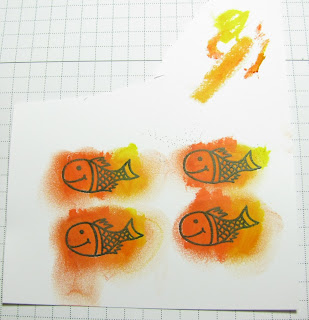 What you see here is a combination of poor planning and genius. I heat embossed the A Muse goldfish four times, because I know me pretty well, and I screw up, a lot. The thought of dragging out the black EP and heat tool again ... ugh, it was easier to have an extra, just in case.

I covered them with three different Gelatos, working from dark to light instead of light to dark, so I had to clean off the surface of each one up above there. Geez. I took my finger and rubbed them to blend the colors, then I cut them out.

Here's the finished card again, so you don't need to scroooooll up all the way to the first one:

The top two small fish cover boo-boos, and the third one at the bottom right is for balance. So, yeah, this card took me three days to make. Oh, another "three"! Ha. Anyway, I like this "three" way better than the postal service delivery person "three". And I'll use that digital chevron some day. It's replaced the big fish in the UFO pile. Do you see why I'll never be finished?

Thanks for reading this far!  And thanks for stopping by!

* That digital image is just that: a digital image. It is NOT a cut file. I just manipulate it using the Silhouette software, then print it and cut it out. I've had several comments about the detail, but it's not cut.
Posted by Leslie Hanna at 8:26 PM