The other day I posted a Zipper card I'd made, and it still needed a sentiment, like "wishing you a ..." on the pull strip. I wanted to show you what I just did (I might be a little excited about it ...): 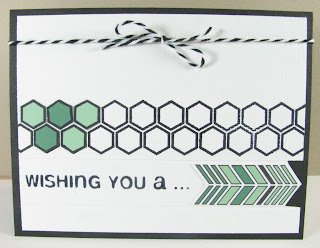 I think it turned out great! And it's not even what I'd originally intended to do. Such is a stamper's world ... sometimes things just take on a life of their own.

I started by cutting the 'wishing you a ..." sentiment out of black, using my Silhouette Cameo:

(That's the monoalphabet font.) I included a cut rectangle around the sentiment, as recommended by Kristina Werner, because it gives you an easy way to line the sentiment back up once you've applied your adhesive to the individual letters.

As I started to punch out the letters and realized how tiny they were, this started to sound like work. Then I realized the negative image could be used as a stencil! No adhesive, no lining up! I retrieved the centers of the O and the A and this is what came out: 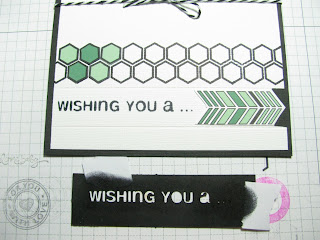 I used some Eclipse tape to hold the stencil in place, and used my 2-way glue stick to temporarily hold the centers of the letters in place. Then I held down the bottom of the stencil (too lazy to get another piece of tape) and used a dauber to apply Ranger Archival black ink. DONE!  I love the look, and these letters won't come off! Aaaaand, the stencil is reusable, at least for a little while.

Thanks for stopping by!
Posted by Leslie Hanna at 11:13 AM