When I spied this CPS sketch: 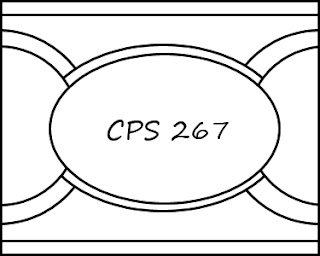 I had an idea. This effort would be another example of a morphed idea, and the card taking on a life of its own. Here's my card, then I'll explain: 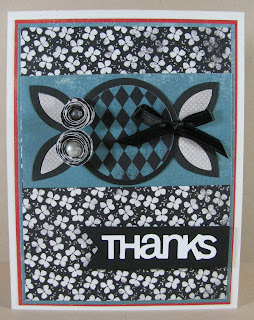 You can sorta see the tiny part of my card that was inspired by the sketch. I forgot how small the SU Lattice die is, so all I had was a card part; nothing big enough to cover the whole card. I was sad.

My Authentique 6x6 pad was still out, so I used it to build the rest of the card around the part on the blue strip. And those lovely embellishments? I had to piece the black circle, and the embellishments cover the seams. :) I also think I glued my tweezers together trying to rescue the pearl from the center of the smaller of the two flowers. It was drowning in Glossy Accents. In the end, I just added another pearl on top of it. And I need to check on those tweezers.

The "thanks" was in my UFO pile, and I layered it onto a piece of black so you can seeee it.

Now that I look at this card, it's tres busy. Tres tres. I need to learn when to just stop. Maybe putting that blue strip on a card all by itself would have been a better plan. Or just the lattice by itself. Oh, well. In the end, I used up a bunch of remnants of black and pieces of my Authentique papers and that "thanks" UFO, so there's that. Not a total loss. Maybe someone's favorite colors are blue and black. You just never know. :)