Making a card can be a long and winding road. Well, at least in my world it usually is. Once in a while I get an idea and execute it very close to what I saw in my head, but most of the time there is major morphing and distraction. Major.

For example, I had printed off this Play Date Cafe challenge: 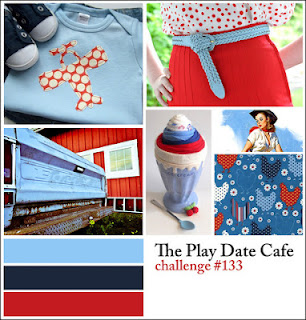 thinking "manly", "patriotic", and perfect for this Memorial Day weekend.

First out of the gate was an attempt to use some "close, but not really" colors of new washi tape. I've actually played with this one for several days, and this is what finally came out: 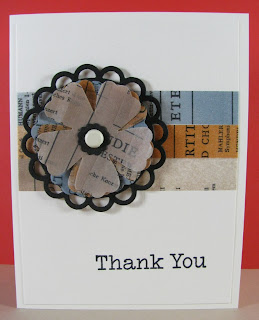 Well, the rust one is sorta red, and the blue is blue, but the tan ... isn't. I've had those three strips of tape on that layer for days ... DAYS. I finally broke down and made that flower today. I covered 2x2 squares of vellum with the tapes and die-cut them. Not bad. Kinda muted.

Then I saw this card and immediately NEEDED those triangle dies. Isn't that card awesome? I found the dies and decided they were too spendy for how often I'd use them, so I tried to make my own triangles. I tried the Silhouette. Fail. Next I tried to cut my own. I pulled out my textured 2008 In Color card stock and started measuring and hacking. Looking at the pile of paper shards, I thought I could see the justification of the spendy part. Also, those papers aren't the right colors, anyway. But I was so invested in this project, I just couldn't stop, though perhaps I should have. This is what finally came out: 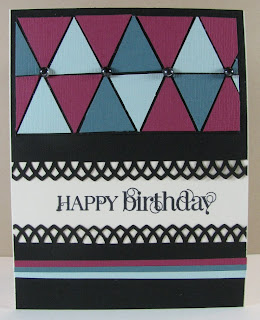 I still don't have a card for the PDCC challenge. I may give up and move on. We'll see.