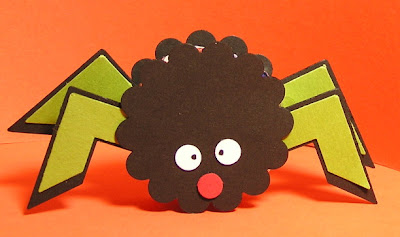 Isn't this cute? I can say that since I did not make it up. I totally stole it from here. I just made this one in under 5 minutes, including the time it took to retrieve my punches from The Other Room. It would have taken me less time if I'd had a clue about how to put the legs on. I eventually got it, even though they still need a little adjusting there in the back. I thought about drawing little lines on the legs to make them hairy. I think I'll try that tomorrow.

I like to mix things up for my customers, so once in a while I throw in a little bonus project. They should love this one since it involves something covered in chocolate. Hmmm, perhaps I should not put out the whole box of Peppermint Patties, ya think? Some might just go missing. It happens every time chocolate is involved. ;-)

Now that the weather is cooler, I could make some of these to sell at my markets since there is no open food involved (like M&Ms or candy corn, or even the hot cocoa I made last year - those are no-nos without a food license.) I think they'll be a hit with the kids, anyway. I may also make these for people at work. Anyone care to make a bet on if any of that will actually happen?

And in case you were wondering, yes, I have a whole box of mini Peppermint Patties that I just opened to make this project. I tell ya, I have a lot of stuff...and you thought I was kidding.

Oh, and I shamelessly put in another Demo order this weekend for things I just had to have. Luckily for me it pushed me into the next commission level, so if you do the Demo Math right, I got sumpin' fer nuthin'. I tell ya, that Demo Math can be really expensive sometimes. But I also sold three of my retired sets over the 'net, so it kinda made up for it, sorta. But then there's that Copic order I just did ... what?! Did you hear something!? Gotta go ....